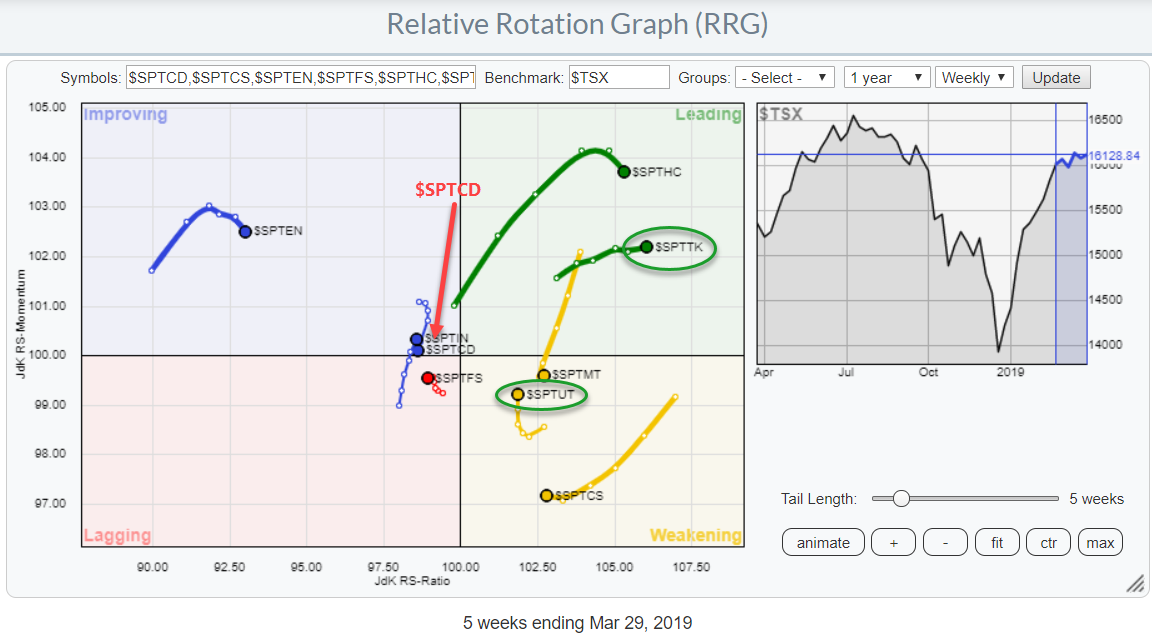 Last night I arrived in Toronto for a weekend with my son and his family, before heading towards New York to attend the CMTA symposium next week.

So for this article, it only seems appropriate to have a look at the Canadian sector landscape from an RRG perspective.

The Relative Rotation Graph above shows the rotation of the nine Canadian sector indexes (capped) against the TSX composite index ($TSX).

The picture on the RRG shows a somewhat tilted universe dragged into the upper right (leading) quadrant by the Technology and Healthcare sectors.

Scanning the rotations gives me three sectors that I would like to study a bit more in depth.

Below is the zoomed in version providing a bit more detail for these rotations. 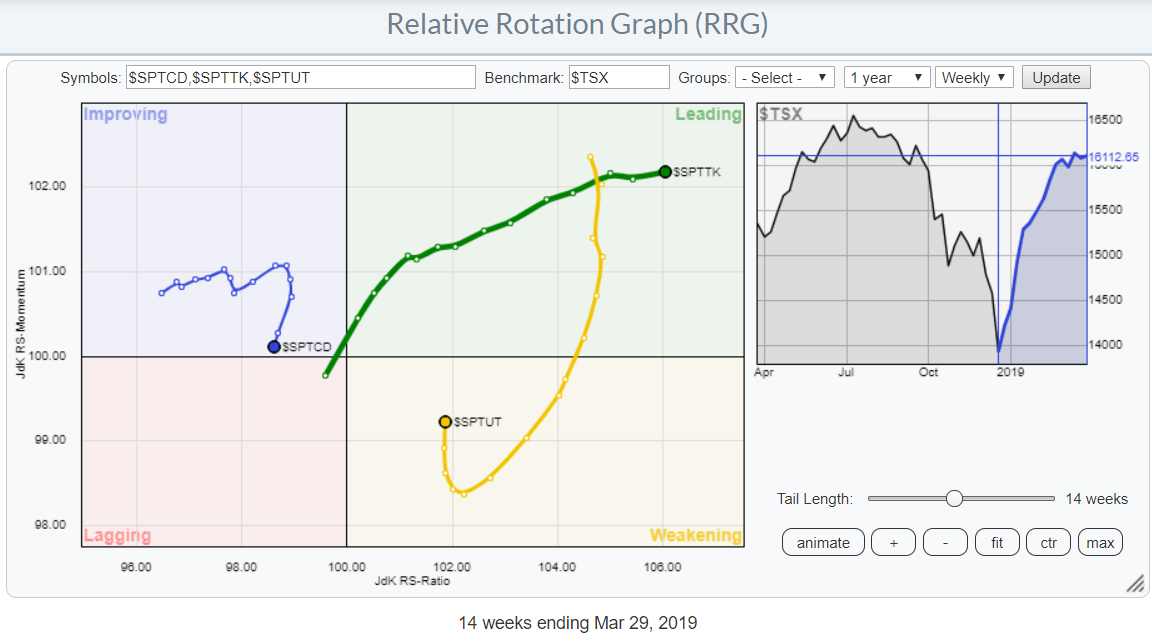 The first one is Technology as it seems to be the strongest sector inside the leading quadrant and it is still heading further East.

The second sector is Utilities as it is inside the weakening quadrant but has already clearly turned back up and is starting to head back towards the leading quadrant.

And finally, the Consumer Discretionary sector which is inside the improving quadrant but recently rolled over and is almost crossing over back into the lagging quadrant. 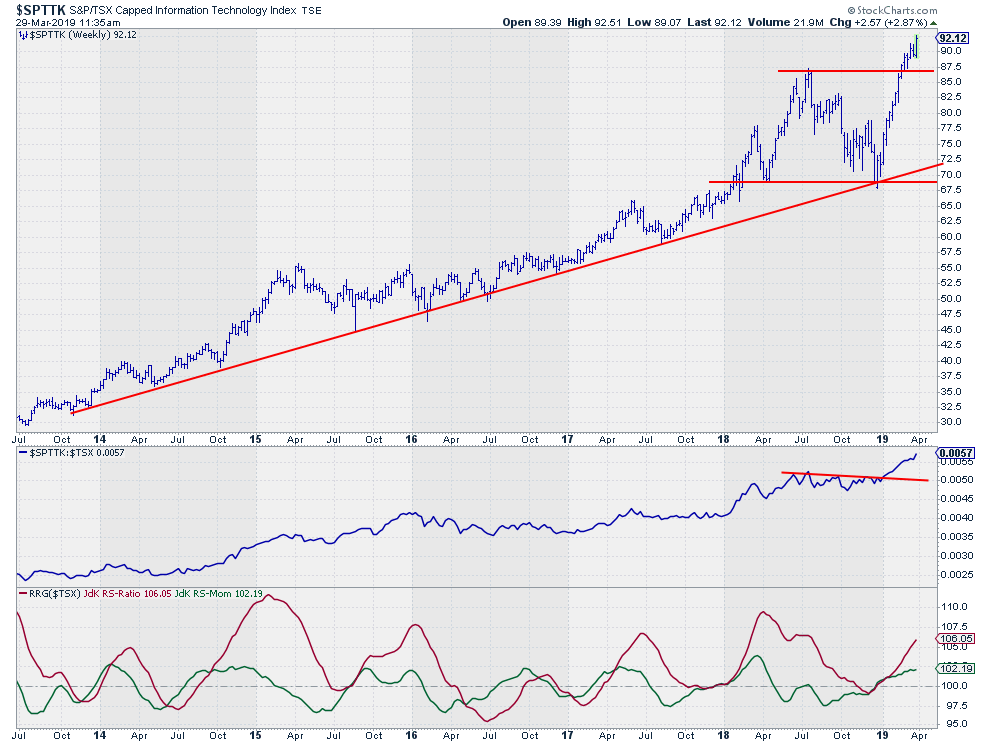 The rally out of that low which started late 2018 is extremely steep and makes this move vulnerable on one hand but at the same time, it is extremely powerful. The break beyond the mid-2018 high only confirmed the current strength behind this move.

From a relative perspective, the price-decline in 2018 only caused a moderate weakening in relative strength with a very short rotation through the lagging quadrant in November-December.

For the time being both price and relative charts point to a further outperformance against the $TSX index but keep an eye for the tail of  $SPTTK rolling over as it may signal a corrective move.

Given the position and the rotation of the technology sector on the Relative Rotation Graph, such a correction is likely a renewed buying opportunity. 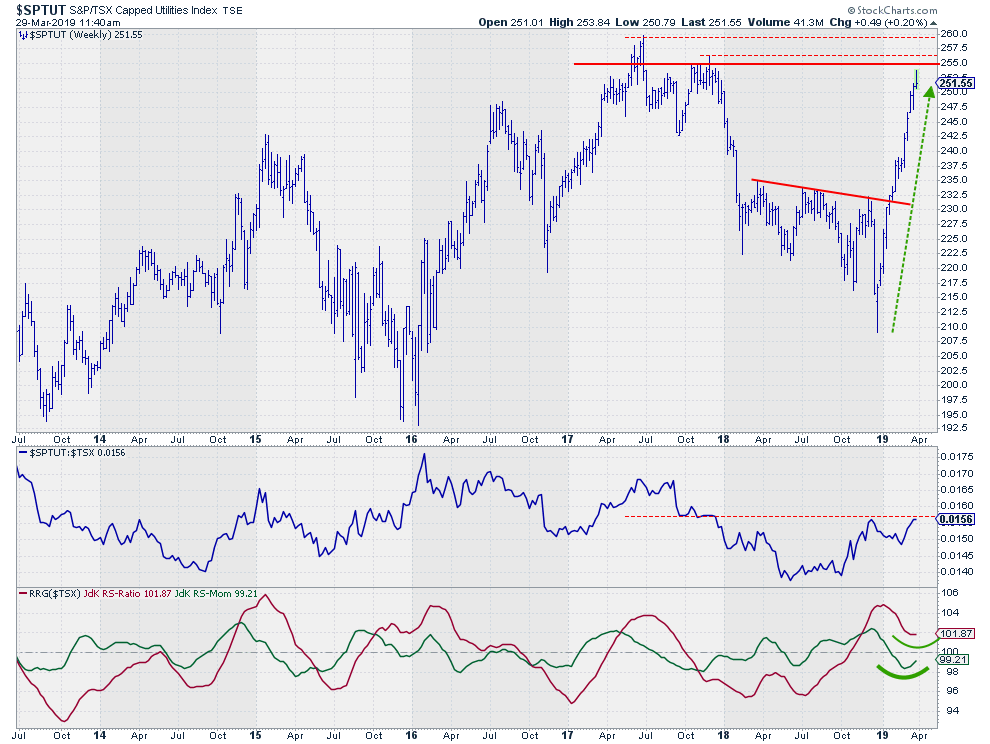 Another sector with a very steep move out of the December low is Utilities. This sector shot up from $210 to $259 in almost a straight line. Again a thin line between being vulnerable and very strong.

The key takeaway for this sector IMHO is coming from the relative picture. The RS line is testing resistance coming from its recent high while the RRG-Lines seem to be putting in a low and are starting turn upward again.

This translates to an upward turn of the tail inside the weakening quadrant. Usually, this signals a new up-leg in the relative trend.

Assuming that the sector will be able to maintain this rotational pattern a break higher in relative strength looks imminent which will bring Utilities back into the leading quadrant.

From a price point of view, the area between $255-$260 looks to be heavy resistance. 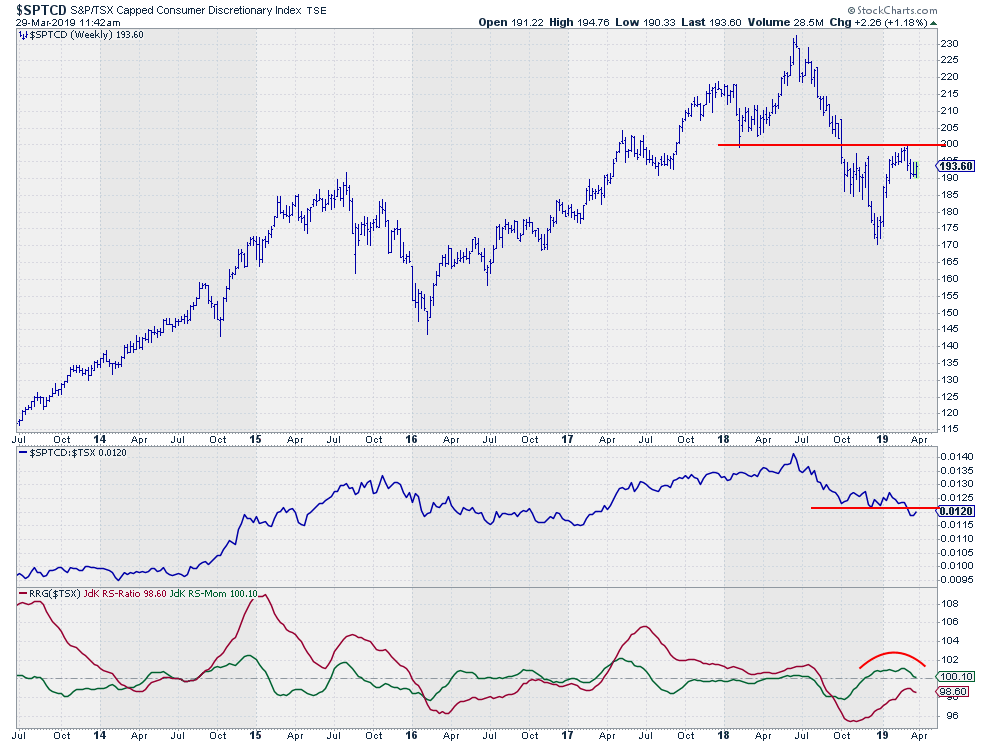 A weak(er) picture is painted by the Consumer Discretionary sector. On the Relative Rotation Graph the tail is rotating opposite to the Utilities sector which we discussed above.

Consumer Discretionary entered the improving quadrant late November but never managed to gain enough traction and over the past few weeks the tail started to roll over and the sector is now close to crossing over into the lagging quadrant again.

On the RRG-Lines, in the lower pane of the chart above, this shows up as both lines, RS-Ratio and RS-Momentum, moving lower with RS-Ratio setting its top below 100.

The recent break of the relative strength line below its recent lows is confirming this weakness and signals more relative decline ahead against $TSX.