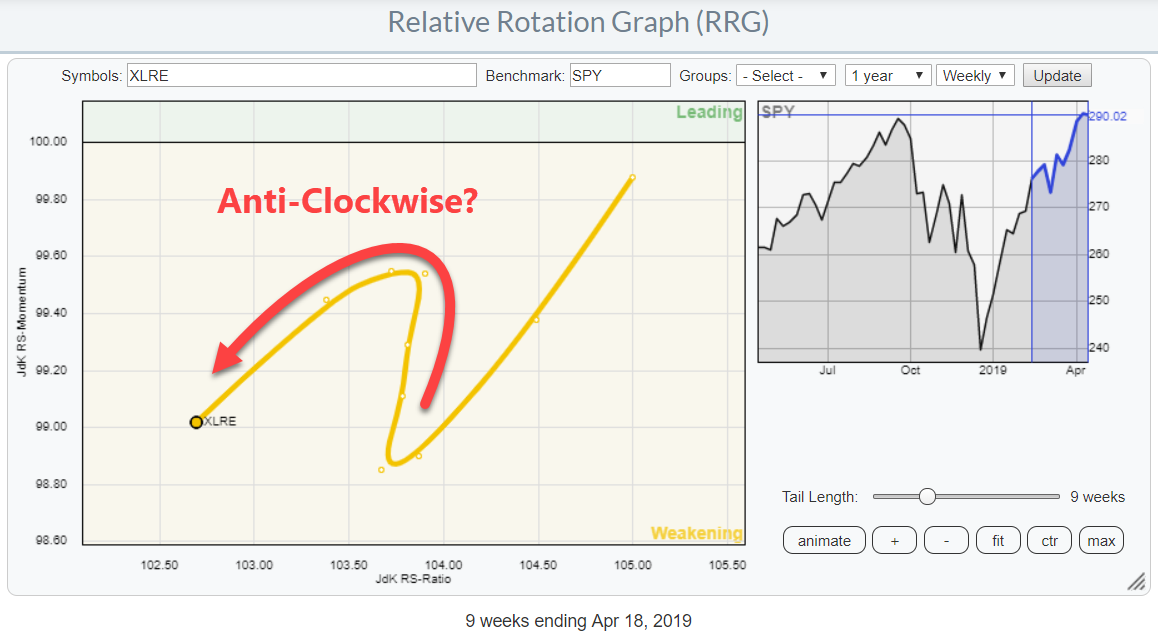 Last Thursday, 18 April, was the third Thursday of the month, my regularly scheduled guest appearance on MarketWatchers LIVE. As Tom Bowley was enjoying a well-deserved day off, it was just me and Erin on duty.

It wasn't my first time co-hosting, but every time I fill in for either Erin or Tom, it makes me realize what a great job they do every day. Since I was filling in for Tom, I'd like to make a big shout-out to him for all he does on MWL - fantastic job buddy!!! Hope you had a good long Easter weekend!!

My normal slot is "Breaking it Down with RRG," where I look at various interesting rotations that I come across in the markets, sectors, asset classes, stocks, etc. With Tom absent, I decided to add a bit of theoretical background info on Relative Rotation Graphs to the show and take some of the load off Erin's shoulders.

The subject: "hooks" and one-sided rotations. These are two common phenomena that are regularly spotted on RRGs, but they are not (entirely) clear for every user.

Note: As I was co-hosting the show, I have not been able to respond to questions in the chat. I did get some questions mailed to me and I will address these either individually or in a future blog post.

"Hooks," as I've started to call them, are situations where the tail on a security snaps anti-clockwise all of a sudden rather than tracing out the expected normal pattern of gradually rotating in a clockwise fashion. The good news is that the security is actually going through a clockwise rotation, as expected, but it is simply not visible on the RRG. The reason for that is that this rotation is taking place so quickly that it cannot be picked up by the time frame of the RRG that you are looking at.

In order to view this rotation in more detail, we have to switch to a lower time frame, in this case the daily RRG )(as plotted below). 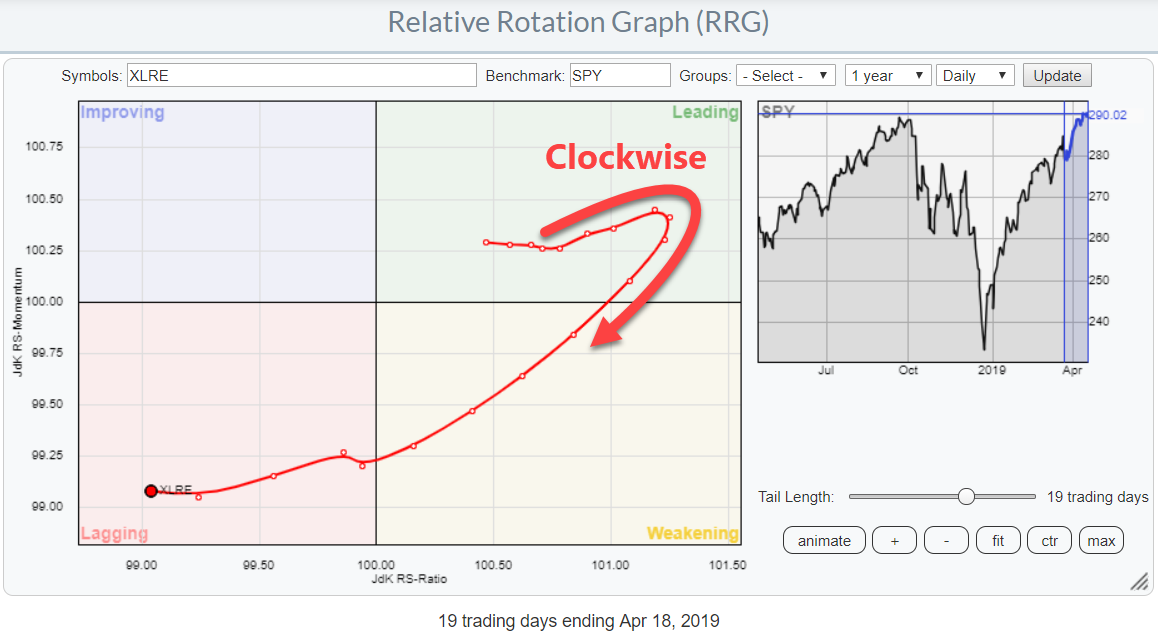 As you can see, the tail on XLRE is now showing a clockwise rotation again. But it is a very sharp turn, even on the daily chart.

Hooks are not uncommon and happen regularly; they tell you that a sudden shift in relative strength has taken place. Moving to a lower time frame will help you to analyze this fast rotation in more detail.

If you use RRGs regularly, you may have noticed that the rotations do not always travel through all four quadrants in sequential order. Understanding what happens in these situations will help you to read and better understand Relative Rotation Graphs. 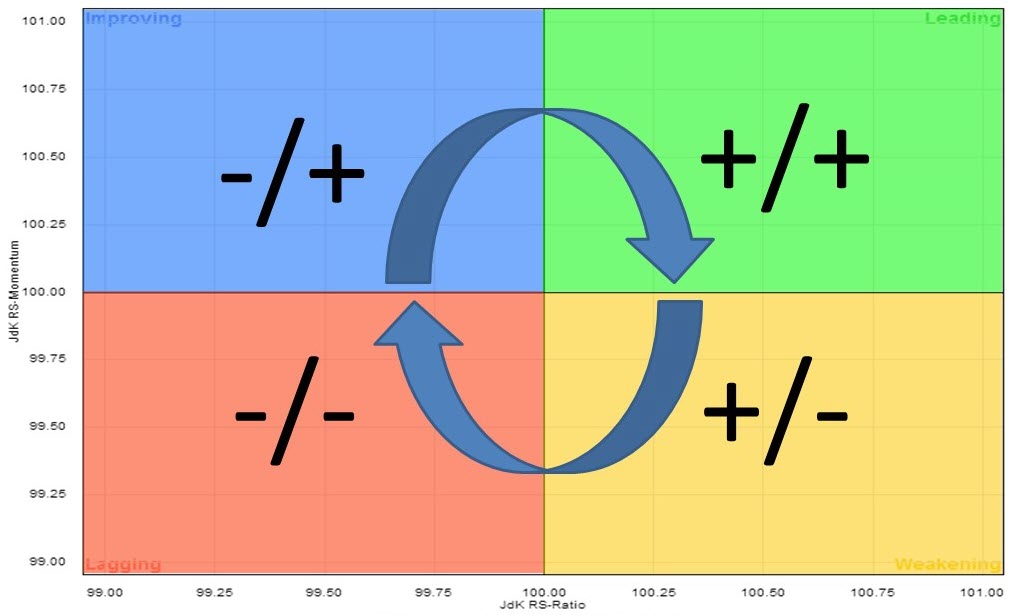 The usual rotation on a Relative Rotation Graph tracks a clockwise pattern, which starts in the LEADING quadrant. Here, you will find sectors that are in a relative uptrend against the benchmark (i.e. SPY) as the JdK RS-Ratio is above 100. Since the JdK RS-Momentum reading is also above 100, this relative uptrend is still pushed higher (accelerating) due to strong momentum.

The first thing that will happen is that relative momentum will decrease, flatten and eventually drop below 100, which indicates that relative momentum is now negative. At that time, the sector will move from the leading quadrant into the WEAKENING quadrant. This quadrant contains the sectors that are still in a relative uptrend, but decelerating. The RS-Ratio is still above 100, but the JdK RS-Momentum indicator now being below 100 indicates that this uptrend is now losing strength. When this happens, you will be able see on a regular price graph (in combination with the RRG-Lines) that the RS-Ratio line has peaked and is starting to move lower, while still being above 100.

As this deterioration continues, the sector will move into the LAGGING quadrant. Here, you will find the sectors that are in a relative downtrend. In this section, said relative downtrend is getting pushed further down by weak-but-accelerating downward momentum.

The first thing that will happen is that relative momentum will level off and turn upward before then moving into the IMPROVING quadrant. This quadrant contains the sectors that are still in a relative downtrend, with a JdK RS-Ratio below 100, but where that trend is turning around (decelerating).

On a regular price graph, in combination with the RRG-Lines, you will see the RS-Momentum line above 100 and moving higher. Meanwhile, the RS-Ratio line, though still below 100, has put in a low and has started to move higher from that low.

Eventually, a further improvement of relative strength, in combination with relative momentum, will lead to a rotation back into the LEADING quadrant, which completes a full rotation.

This was the theory, anyway. Unfortunately, reality does not always match theory - ahummm ;) - and markets will, more often than not, keep throwing us curve balls.

One of these curve balls is a situation wherein the rotation does not travel through all four quadrants as described above, but remains on one side, left or right, of the Relative Rotation Graph. The RRG above shows the animated rotation of the Technology sector (XLK) against SPY. (If you click the animated image and open the live version, you will be able to control the speed of the animation by either dragging the slider in the benchmark graph or by using the left and right arrow keys.) 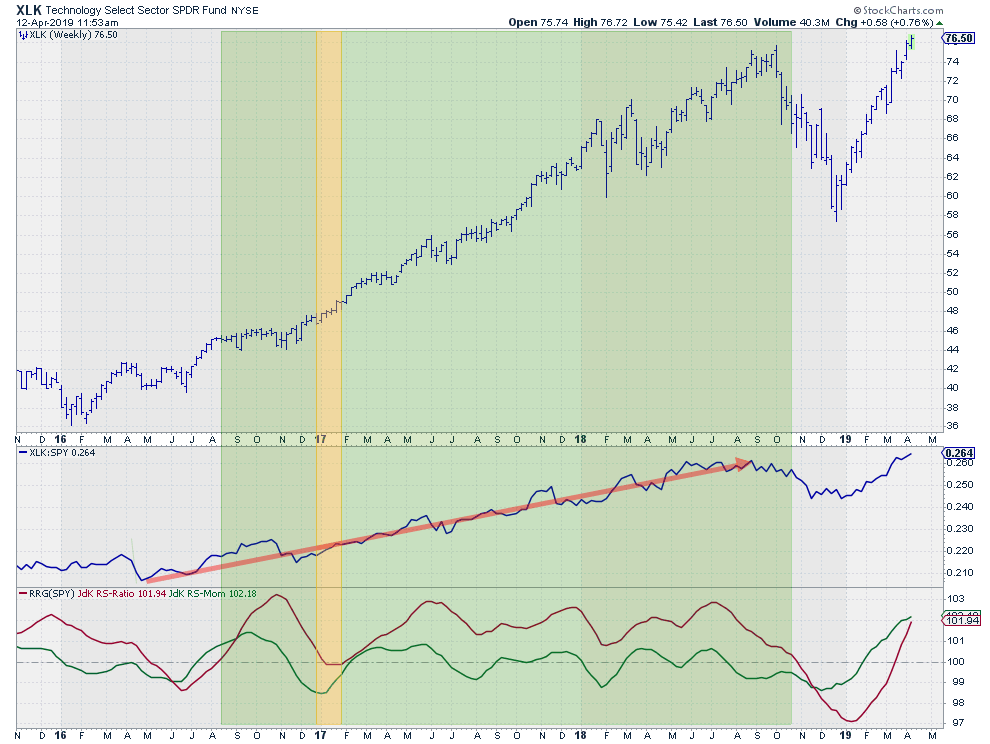 These periods are highlighted in the price graph above, combined with relative strength and RRG-Lines. The shaded area matches the uptrend in relative strength, indicated with the red arrow and perfect hindsight, with a small delay.

As you can see, the uptrend in relative strength is powerful, but still does not form a straight line. Just like every other trend, this one also has occasional dips to deal with. These dips result in higher lows after higher highs, causing the JdK RS-Momentum line to drop below 100 even as the RS-Ratio line remains comfortably above 100. This indicates that the uptrend is still intact.

The uptrend ends in November 2018, when the JdK RS-Momentum line fails to come back above 100, peaking lower 100 and subsequently dragging the JdK RS-Ratio line below 100 as well. That's the moment when XLK crosses over into the lagging quadrant, starting a 20-week journey through lagging and improving before returning to the leading quadrant just three weeks ago.