The last update on the RRG baskets goes back to 20 July. In that post, I did a big clean up and left the basket with the following positions: 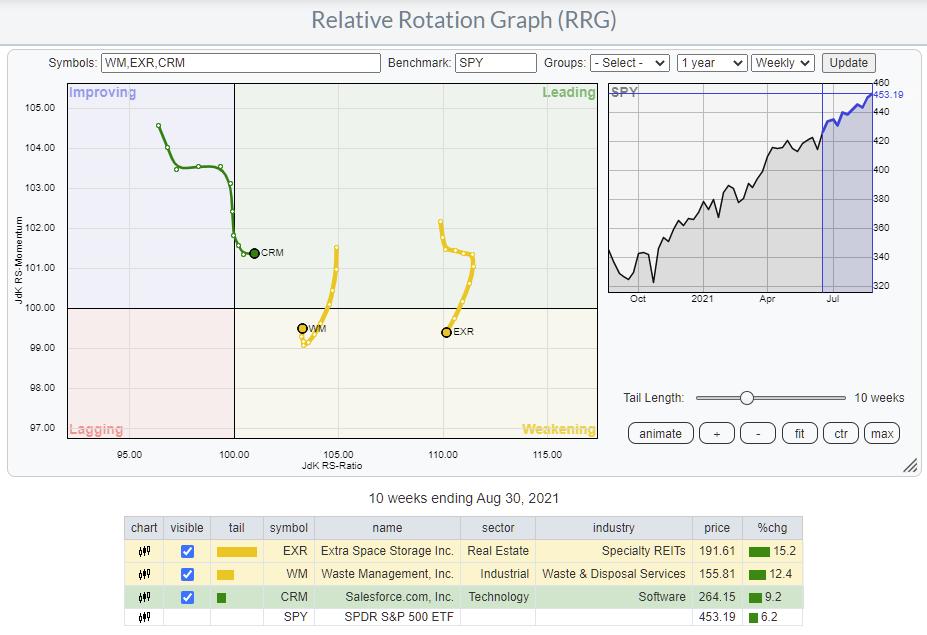 The RRG for the three stocks on the long side shows CRM inside the leading quadrant and starting to move higher on the JdK RS-Ratio scale once again following a short decline on the Momentum scale. On the other hand, WM and EXR are inside weakening, where WM has just started to curl up again while EXR is still at a very high RS-Ratio reading, with enough room to rotate back up. The charts for all three stocks show that their trends and relative performance remain on track, so there is no reason to remove them from the basket. 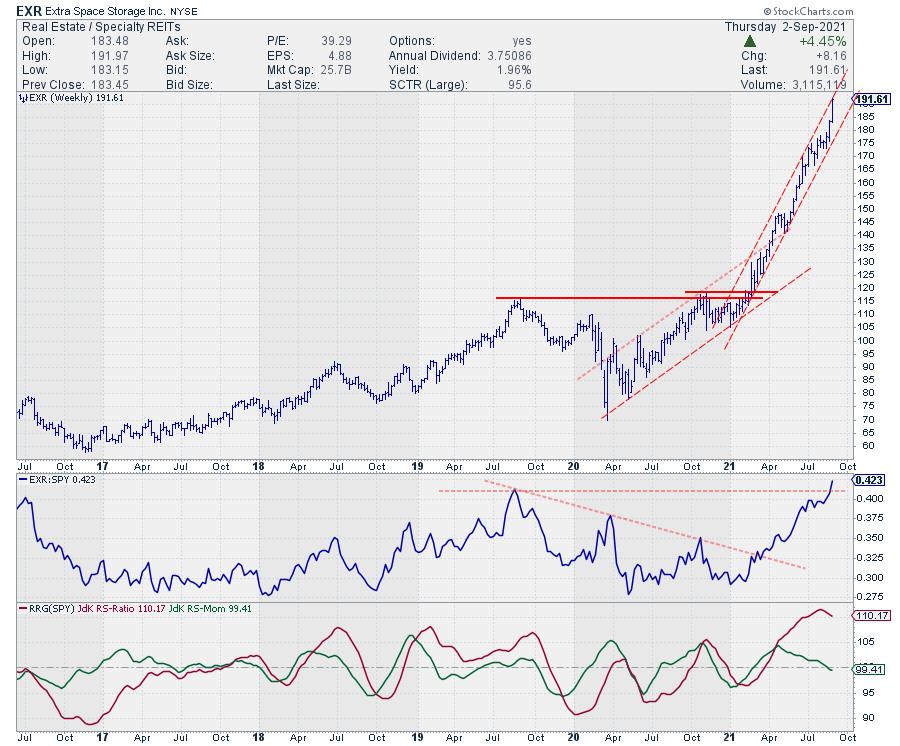 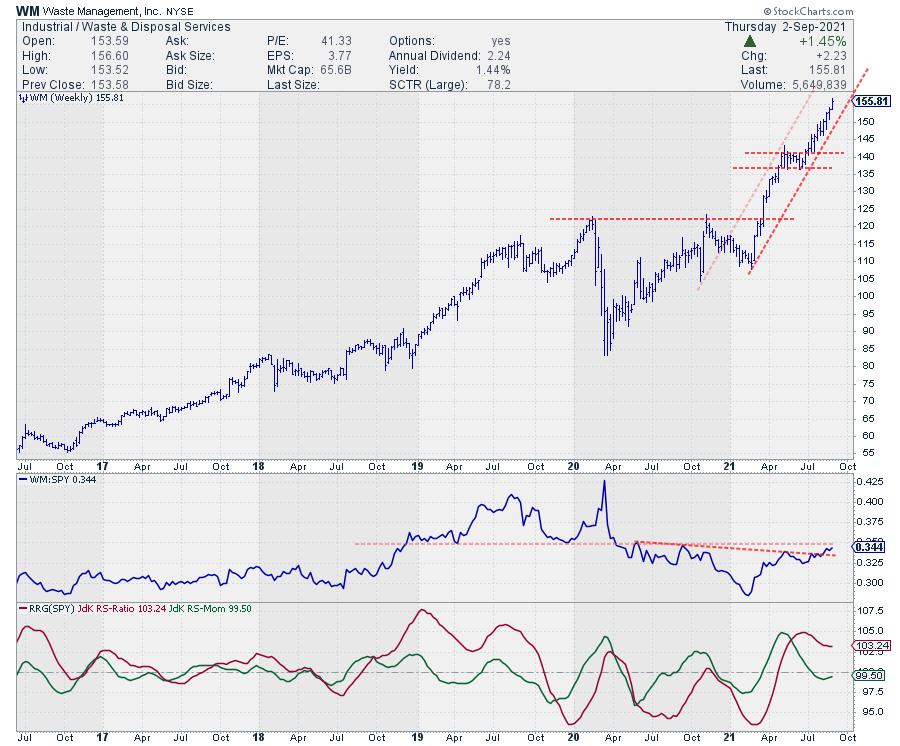 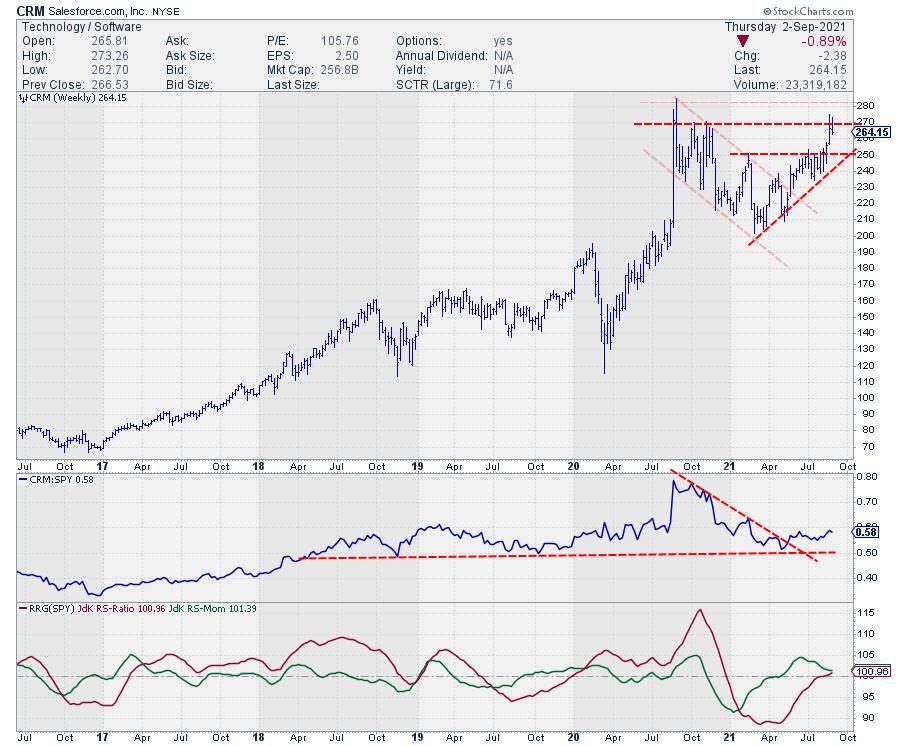 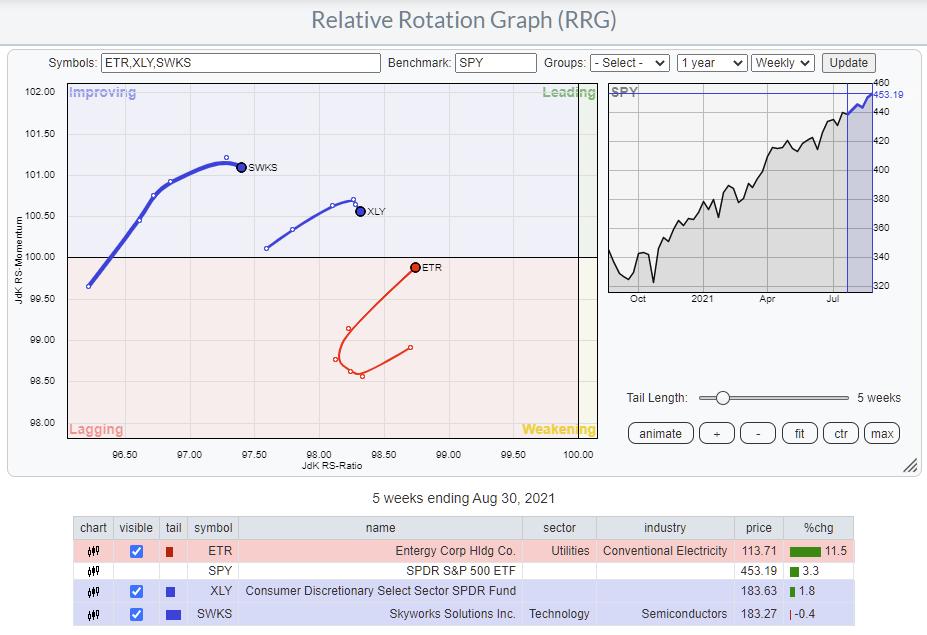 Looking at the individual charts, SWKS and XLY continue to show relative weakness, with their RS-Lines in downtrends and the RS-Momentum line ready to roll over downward, pushing the tail back into the lagging quadrant. So both are still good as shorts.

ETR is a different story. On the price chart, this stock broke out of a broad range with resistance around 110. That break seems to be holding up and 110 is starting to serve as support. In addition, the RS line is now also breaking out of its downsloping channel, which is starting to pull both RRG-Lines upward now. The combination of an upward break in price as well as relative and the RRG-Lines starting to move upward disqualifies ETR as a short position, so I am removing it from the basket. 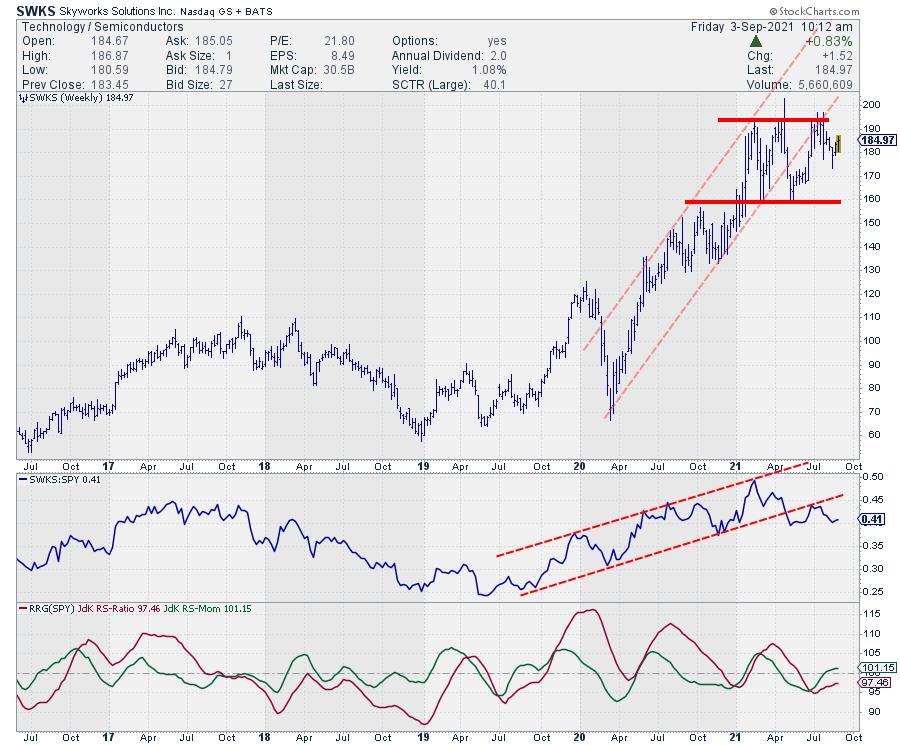 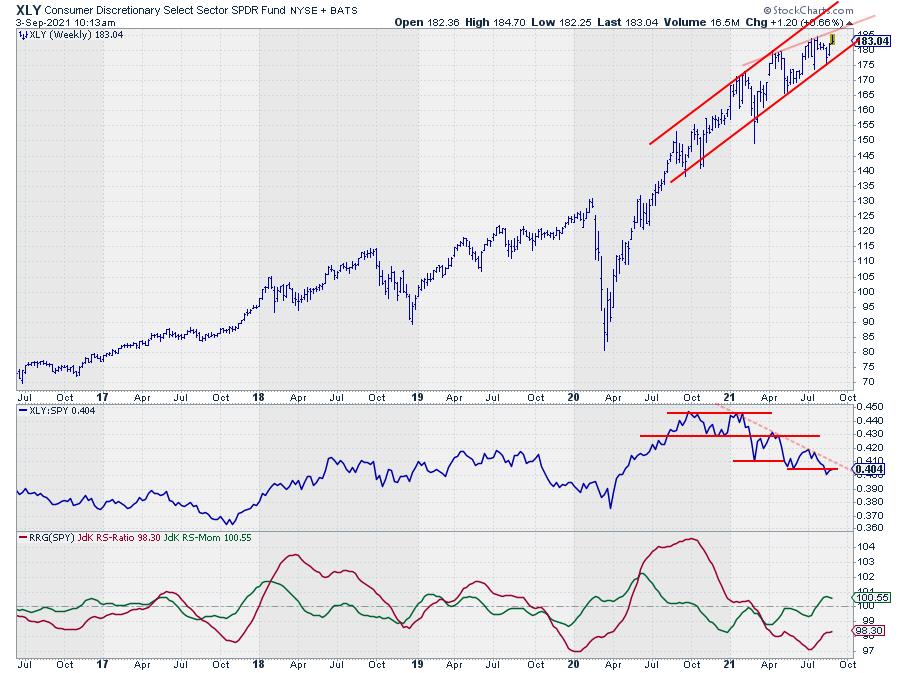 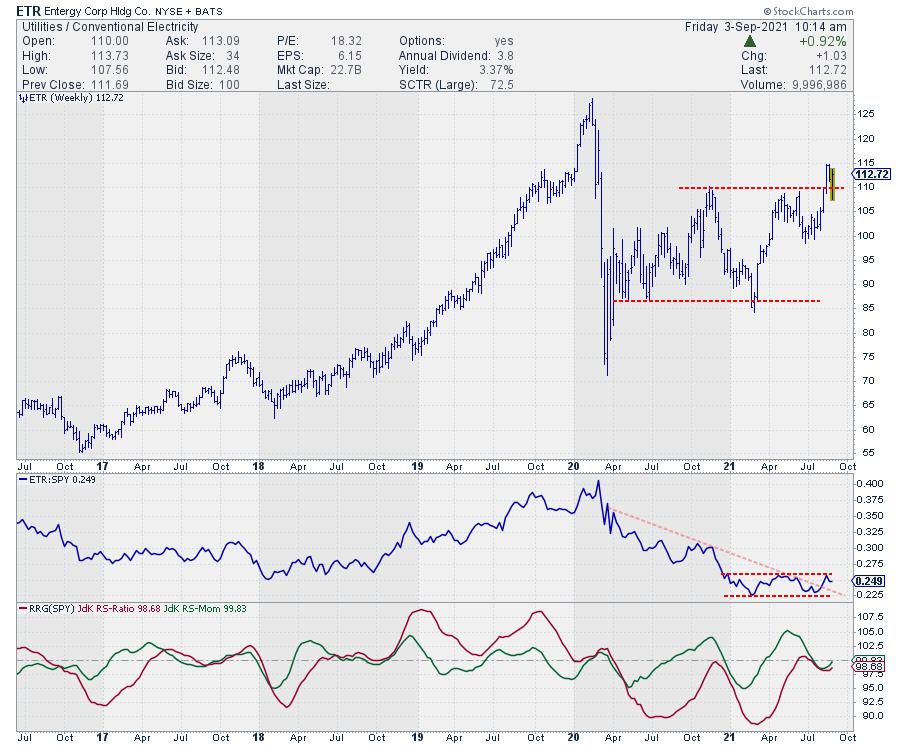 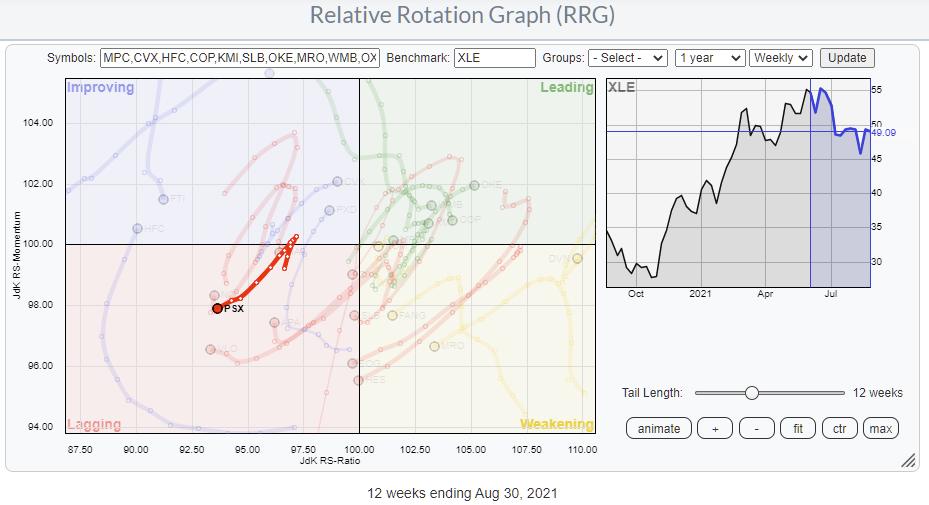 The weakest sector at the moment is Energy, pushing further into the lagging quadrant with a long tail. So, to find a replacement for ETR, I looked at the members of the Energy sector to find a suitable candidate.

The RRG above shows that RRG and highlights PSX, which just rotated back into the lagging quadrant. This makes PSX a weak stock in a weak sector. 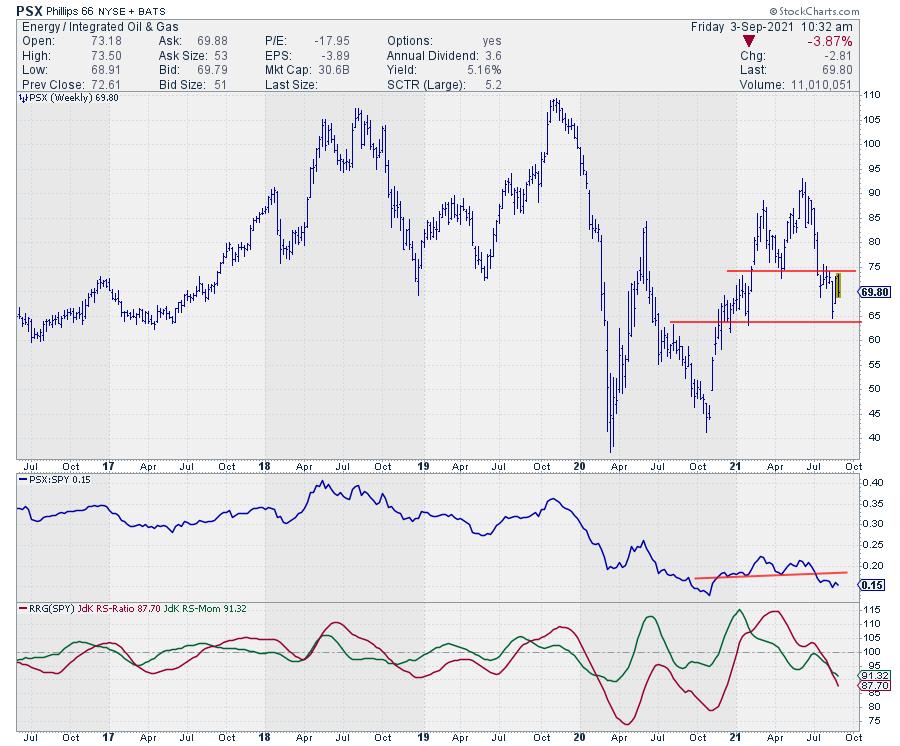 On the price chart, a double top (almost ;) ) was completed on the break below 74.50. After the initial dip to the 65 area, PSX pulled back to the break level but seemed to have failed, as we are already trading significantly lower again this Friday. A break below the horizontal support around 64 will very likely accelerate the decline.

On the relative graphs, the raw RS-Line has just resumed its rhythm of lower highs and lower lows, boosting the decline of the RRG-Lines.

All in all, a good candidate for addition to the short basket to replace ETR.