In a recent conversation, somebody mentioned "New York Fang" to me. I was under the impression he was referring to the FANG stocks. Only later did I understand that he was talking about an ETF and an associated index which is a bit broader than "just" FANG or FAANG.

The ETF I am referring to is FNGS. The official description for this ETF, or more correctly ETN, is as follows:

The NYSE FANG+ index is present on StockCharts.com under the ticker symbol $NYFANG.

When I searched for both symbols in articles on the site I found ZERO mentions....

Now that we've "found" it, let's break it down and see how it looks on the charts and the RRG.

If we start with the breakdown of the components using the table that you can find below each Relative Rotation Graph, we see that there are 10 stocks in this index and they are equal dollar-weighted, so no dominance from any mega-cap stock.

Let's start with a look at the chart of this $NYFANG index in relation to the S&P 500. 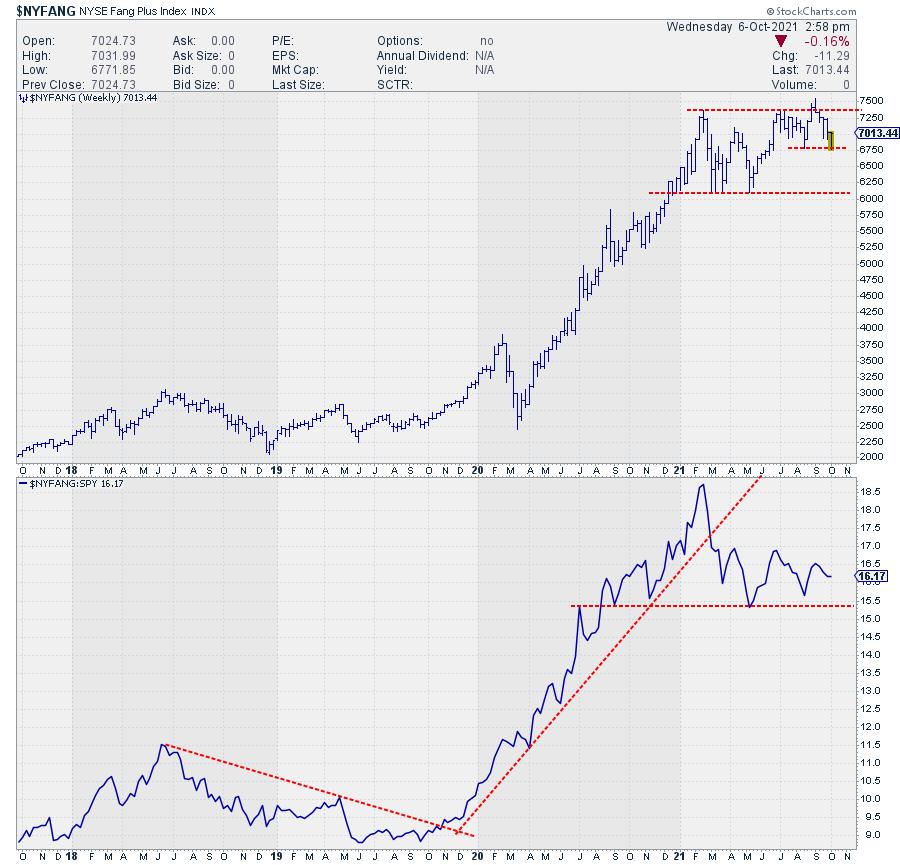 Calculation of the index started somewhere in 2017 and, until mid-2018, $NYFANG clearly outperformed the S&P 500. From the 2018 relative peak onward, the $NYFANG stocks underperformed the market for an 18-month period until the end of 2019.

In late 2019, the relative strength of $NYFANG against SPY started to accelerate and rise steeply. It continued to do so at an unprecedented pace until March of this year, when the RS-Line steeply dropped and broke below the rising support line that had been intact since late 2019.

From March onward, the relative movement has been more or less sideways, and an important relative level seems to be building up just below 15.5, where a few important lows were formed.

Throwing the members of this index on a Relative Rotation Graph gives us the picture below. 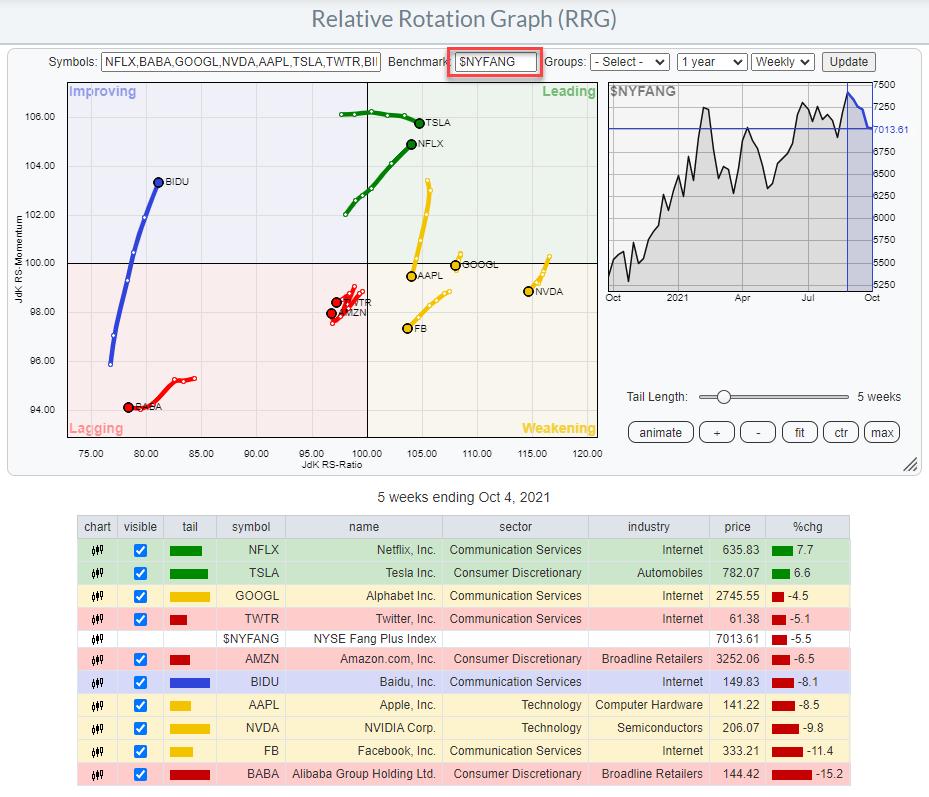 A few takeaways from the rotations which are visible on this chart. The first is that the majority of stocks are moving at a negative RRG heading. Only two are at a clear positive heading, BIDU and NFLX, while TSLA is comfortable inside the leading quadrant but slightly dropping on the JdK RS-Momentum scale.

The tail for BABA is clearly the weakest and it is still pushing further into negative territory. TWTR and AMZN are inside lagging but showing very erratic tails, with no clear heading or direction. However, the fact that they are inside the lagging quadrant and at short tails suggests that they are in stable relative downtrends. 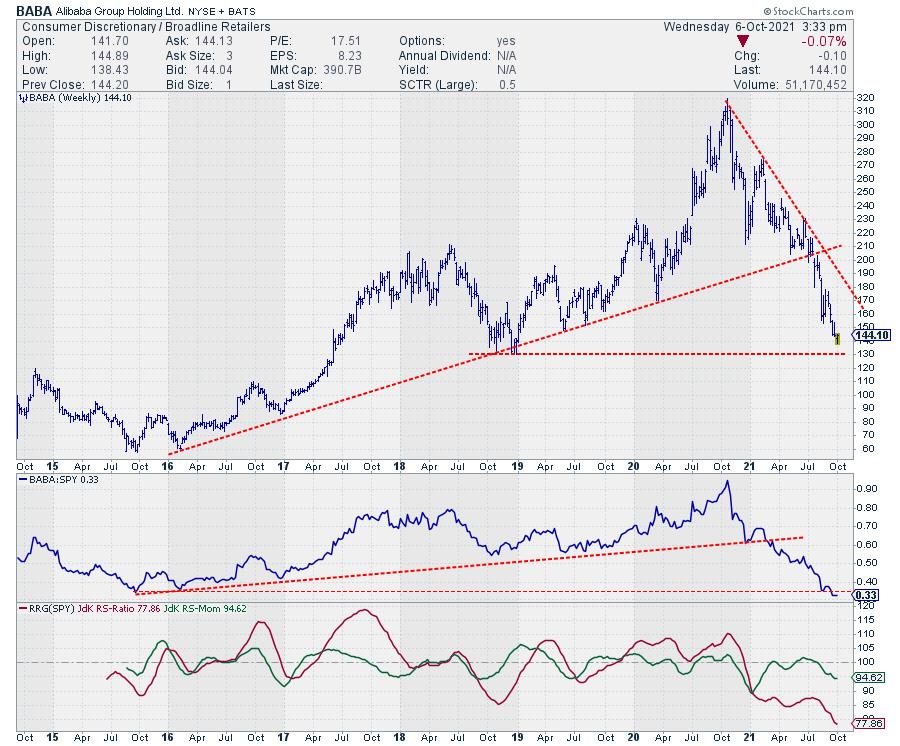 The chart of BABA vs. SPY as the benchmark (more history available than for $NYFANG) confirms the position on the RRG. On both the price chart and the relative chart, major trends have been broken and the downward trends are visible. Support may be expected in the area around $130, where an important low was formed back in 2018. However, the downtrend is so strong that it is very unlikely that it will revert anytime soon. Within the current downtrend, a significant move higher can occur without turning the current trend around.

So within this universe of NY FANG+ stocks, BABA is probably the one that is better avoided, unless you are looking to play an upward bounce within a downtrend. But, in my experience, these are notoriously dangerous. 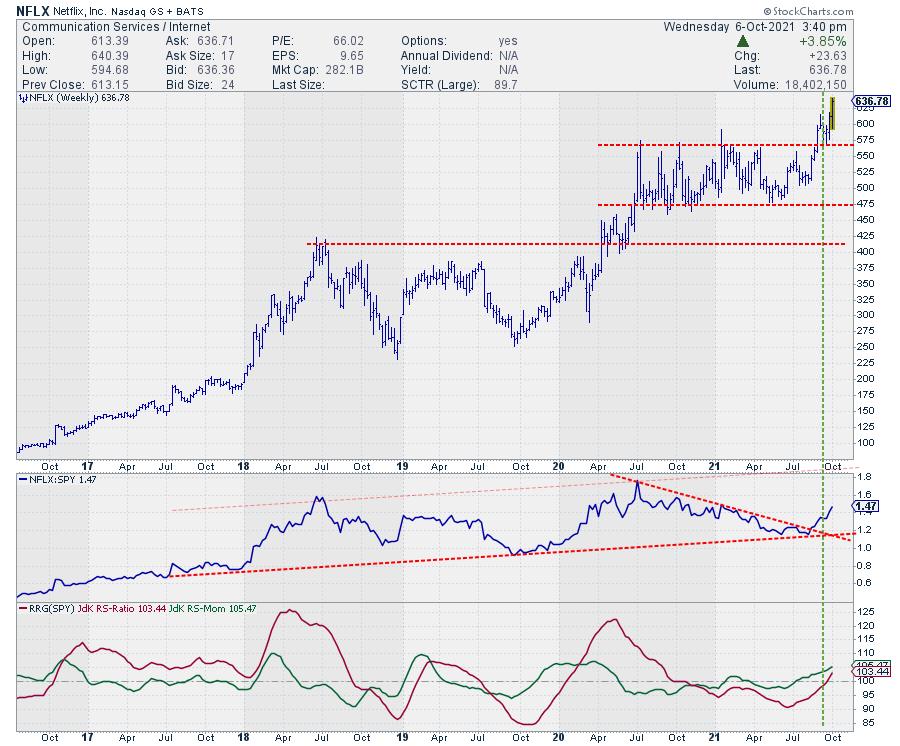 On the positive side, NFLX seems to hold the strongest cards. The tail is moving further into the leading quadrant at a strong RRG-Heading. Looking at the price chart shows that NFLX broke from a year-old trading range a few weeks ago, tested that old resistance level as support and jumped higher from there and is now taking out its most recent high.

Relative strength is following that move and seems to have turned around the relative downtrend that was visible since mid-2020, after bottoming against a longer-term rising support line that has been in play since 2017. And with a little fantasy, that line can even be extended backward to the lows from early 2015. This means that NFLX now seems to be embarking on a new up-leg within a long-term relative uptrend.

All in all, the $NYFANG index as a whole seems to continue its loss of (relative) strength and should therefore be approached with care. Within the index, BABA looks to be the worst stock, while NFLX is looking strong after breakouts in both price and relative terms.