Last night we saw a strong move higher out of Amzn, everyone's favorite all time froth stock. They reported earnings. Yes, it can happen. The stock blasted higher and so did the futures but that wasn't the only reason the stock futures shot up. There were other solid reports wrapped around one bad report from Trip. V, Sbux and others were great so the combination of good reports had the Nas futures exploding higher by nearly fifty points. Everything was set up to reverse the recent move lower on the indexes off the top. The futures held somewhat overnight but started to give it up some when bio technology leader Biib came in with a dud for their report on earnings. That whole sector started to feel the pain which in turn took the futures well off their highs. The Sp almost red at the open. The market opened but within a few minutes the move lower began with some real force behind it. That trend held in place for the rest of the day with the market closing down hard although a bit off the lows which is nothing to celebrate. The short term sixty minute charts getting as low as fifteen on the Dow before the mini bounce late. That's real selling folks. The other day    I spoke about how the 90 rsi reading on the short term Nas chart another technology stocks really wasn't a good thing. That we'd have to unwind and unwind we have done. It's not healthy to get that type of overbought reading. We are paying the price for it all right now. We closed very oversold on the short term charts thus it seems likely that at some point on Monday we should try up a bit even if it's only a temporary move at that. 209.00 on the Spy is now some resistance. Today was a solid day for the bears. Nothing to get overly excited about as the magnitude of the selling off the top has thus far been on light volume but selling it was and the bears will take it. They'll take anything that gives them hope of some day eradicating Sp 2040 with force. They'll sleep better this weekend. 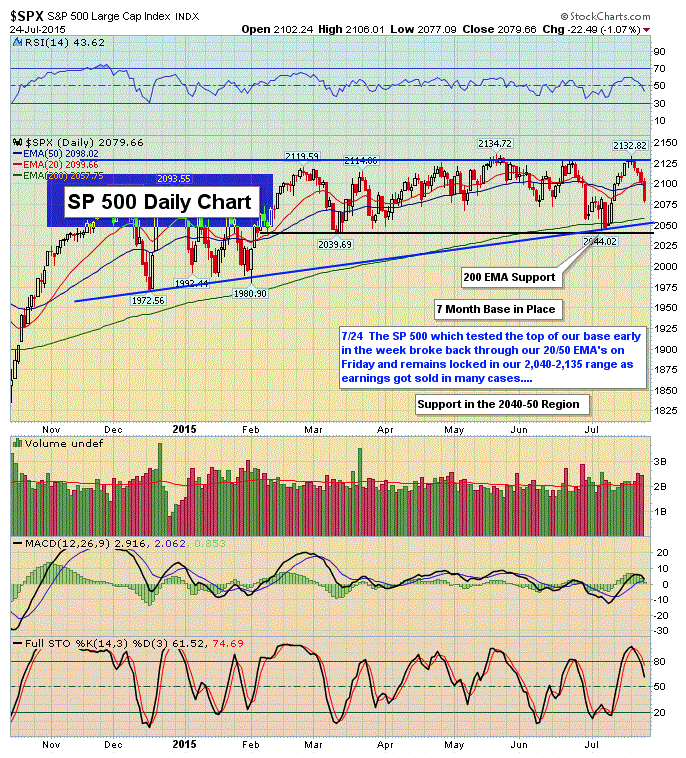 Breadth. This tells us how the market is looking deeper down when selling or buying is taking place. When markets are rising you want to see breadth rocking higher. More winners than losers on a very consistent basis. On the decline you want to see losers well out pacing the gainers. Although the indexes are hanging around more positively than not, breadth is not holding up nearly as well. Fewer and fewer stocks have been carrying the day for the bulls and that's not good for longer term gains. Too many sectors are breaking down. Over the past few days to weeks we have lost some big time areas of the market that had been bullish earlier this year. The first bad move lower came from the transports. The railroads the biggest catalysts to the move down. The airlines a close second. Very few if any areas within the transportation sector acting well. That has not changed. Oversold is staying that way. We're now adding in bad in bad news from other areas such as those semiconductors, industrials and the chemical stocks which had been awesome for quite some time. Not the case any longer. Within all of these sectors we are also seeing leading stocks go away.   Take a look at the Industrial and Chemical sectors below both of which saw new 2015 lows this week: 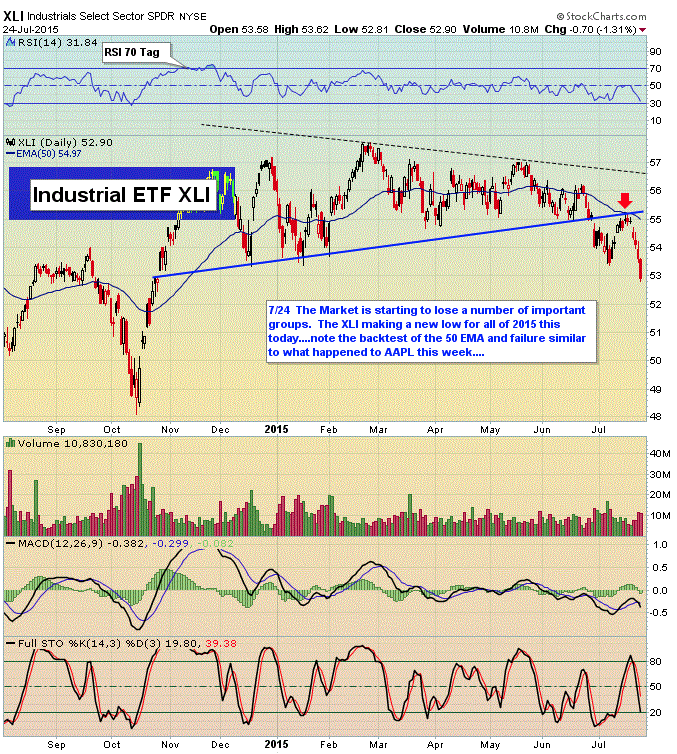 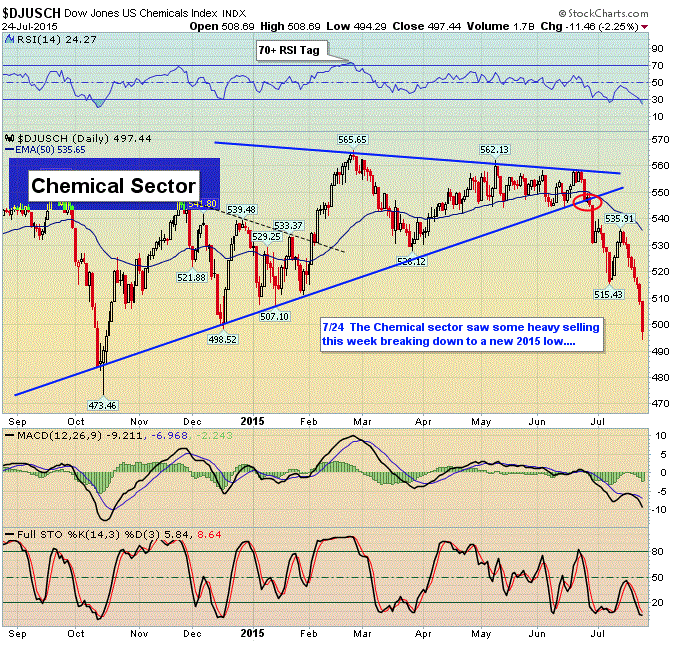 Aapl did a classic breakdown on earnings and after back testing lost 20 and 50 day exponential moving averages, it tanked out. Now 2 plus percent below them. Poor if not bearish action. That stock needs to be watched carefully for further clues regarding the entire market. Breadth has been on the decline, even on the good days and this is a major league red flag. Volume isn't a problem yet but may join in shortly if breadth doesn't pick up in favor of the bulls shortly.

See the AAPL Daily chart below: 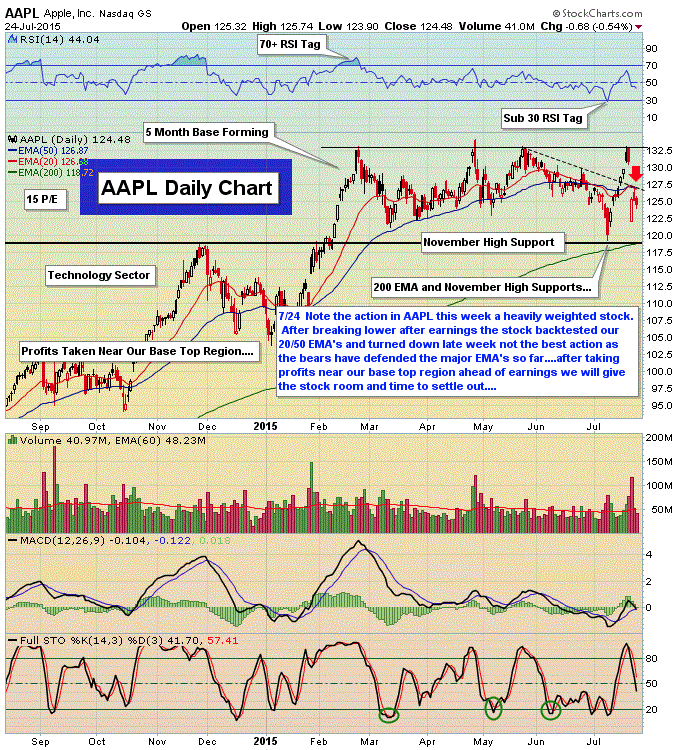 So with all that I've written about this evening you'd think I'd be very bearish. Not at all but I have turned extremely cautious. Red flags are abounding. Add in that froth rocked again this week and we have the making of a potential headache for equities but we're not there yet. In the end it is all about whether the bears can look at Sp 2040 in the eye and take it down below with force. The bulls are losing ground but they aren't dead until 2040 says see you later. It can look real bad at the bottom and real good at the top but that's meaningless. The bulls and bears have found ways to save themselves time after time when things looked dire. It's starting to look bad again for the bulls but let's see if they can pull the latest version of a rabbit out of their hat. It's below 2040 and above 2134 that matter. Nothing else. Don't lose sight of that reality. Don't let emotion take over. Keep calm. See the break one way or the other and then respond.