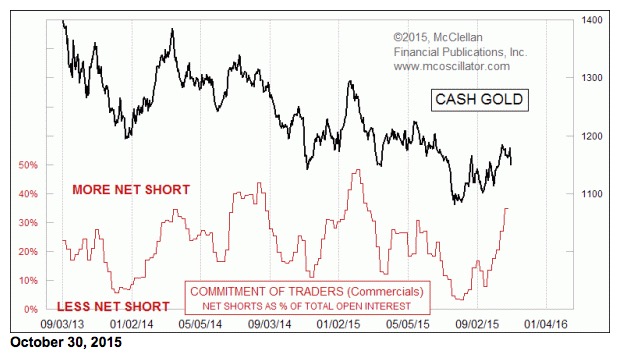 There has been a rapid movement over the past few weeks by commercial traders of gold futures to increase their net short position as a group.  That is a development which has importance for the future of gold prices.

The data for this week’s chart come from the weekly Commitment of Traders (COT) Report, published each week by the CFTC.  Within that report, the CFTC breaks down futures traders into 3 groups.  That agency provides a full page of wonky definitions of each category, but here are my abbreviated versions

Non-Commercial Traders.  The big speculators, AKA hedge funds.  They usually have the opposite position from the commercials, with the exact difference between them consisting of the positions held by…

Non-Reportable Traders.  The small money, and nearly always the dumb money.  They are called non-reportable because the size of positions they hold is so small that the CFTC deems them not to merit reporting individually.

I report on the relevant developments in the COT Report data in every Friday’s Daily Edition.  Not every week has meaningful insights for every one of the futures contracts that I follow.  Generally speaking, these data are most valuable when they show an extreme reading, because extremes suggest that a move in the other direction is likely.  But figuring out what an extreme reading consists of can be a bit of a trick.

For gold, a big part of that trick is knowing that the commercial traders have been continuously net short since late 2001, and so the game consists of evaluating their current position relative to the range of recent values.  Part of the reason for that bias by the gold commercials to the short side is that a lot of the commercial traders are actually gold mining companies who use the futures markets to sell their future production at a price known when they enter the contract.  Since they are always producing, and since financing is sometimes tied to a requirement to fix the sales price, we get a seemingly bearish bias in the data.

Gold prices bottomed at the end of July 2015, when the commercial traders were at their smallest net short position in years.  As gold prices rebounded, the commercials gradually started upping their short positions.  That movement toward a larger net short position just recently gained a lot of urgency, as if they knew that a top was coming very soon and they needed to get positioned for it.  This is something we commented on in our Daily Edition as it was happening, and last week we noted that the level was high enough to get ready for a trend change.  That's a cue to be extra attentive to indications of trend change, and we outlined such criteria for our Daily Edition readers.

That trend change was brought about by the FOMC’s Oct. 28 announcement, which hinted at a probable rate hike in December 2015.  How did the commercials know that was the way that the ball was going to bounce?  They do seem to have that talent a lot of the time, which I suppose is how they got to be the big money.

This chart is only current through last week’s COT Report data, because this coming Friday’s report is not out yet.  The reports are released each Friday at 3:30 Eastern time, and they reflect traders’ positions held as of the preceding Tuesday.  So even when we get the COT Report for this week, we will only know how the commercial traders were positioned before the FOMC meeting, and not how they may have responded to the news.  That we can update after getting next Friday’s COT Report.

If you are interested in following the insights I find in the COT data on gold, bonds, and occasionally copper, crude oil, gasoline, coal, silver, and currencies, you might be interested in our Daily Edition.

As an epilogue, years ago I followed the COT Report data for stock index futures, and it was great!!  But then it gradually began not to work any more.  I figured out that the COT data for the big SP500 had started working less well once the eMini SP500 contract came into being, which coincidentally was about the same time as the introduction of futures contracts for the DJIA, NDX, Russell 2000, Nikkei, and their eMini variants came into being.

So I built a complex model to combine all of those together into one indicator, weighting each according to its dollar value.  It was a royal pain to keep updated, but worth the effort because it was working.  After a few years, however, that new composite indicator also began to fail.

For gold futures, all of the futures traders are in a single place, and trading together.  But in the stock index futures market, it is more complicated.  A trader might be long one big SP500 contract and short several eMini DJIA contract, thereby creating a market neutral position.  Looking at each contract on its own would give a misleading indication about what that trader was doing, but combined together we could still figure out what was going on.

Eventually that too broke down, because there are so many other ways to conceal a stock futures position with options, ETFs, or other derivatives.  The segregation of smart money and dumb money by the CFTC was not enough to thwart all of the smart people who were figuring out complicated ways to enter into long or short positions in stocks and related products.

It was sad to lose such a great indicator, and I wish it still worked like it once did, but we sometimes have to recognize and accept changing market indications.  It is a risk we face with just about all indicators in some way.