Extraordinary persistence - in the face of flagging momentum, carried stocks through most of the build-up to (most) mutual fund(s) fiscal year-end activity, which finished with a desired very late fade. This supports our overall view of an increasingly risky extension very much dominated by trading factors based on either fiscal-year-ends at the funds, or by twisting economic data to appear more favorable than it is. The bad news is good news idea's basically behind, in an era that's already seen disappointments at GDP and earnings estimates, that repeatedly come-in shy as forewarned; but get massaged 'as if' all is fine. 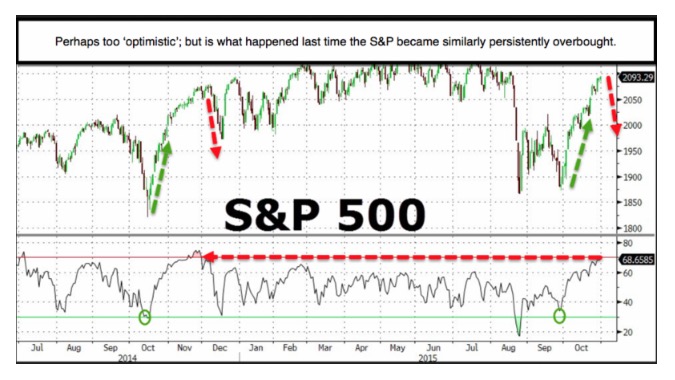 Wall Street mostly believes, even if they allow for a 'pause', that because we're past the FOMC and mostly earnings; not to mention a lower-than-they forecast Q3 GDP (we've warned of those excess estimates all year), that we're now 'in the clear', with the S&P able to launch into 'escape velocity' to new highs. Well anything is possible (though unlikely); while the only 'escape velocity' seen this week (sadly but predictably) has been a vanishing of thousands of 'refugees' from German camps or temporary housing, whether in Berlin or Munich.

Given the German Federal Government (can they be so naive?) allowed entry absent verifiable identity documentation, it's almost 'as if' they intended this to occur. I know it's not reported thusly; but the situation supports the Dollar, not Euro; though the risks go well beyond. (You know our view about Islamism as a thin veil of religion over a totalitarian ideology intent on dominating people as fully-integrating their lives into a cult that has zero tolerance of other religions, or even of secular Muslims nominally willing to assimilate in the West. No real religion or governance in modern times has been responsible for brutality like Islamism; hence the well-meaning ignorance toward this 'cult in religious drag' invites debacles similar to but potentially worse than Nazism or Marxism have brought in the last Century. This risks devastating social / economic impacts.) 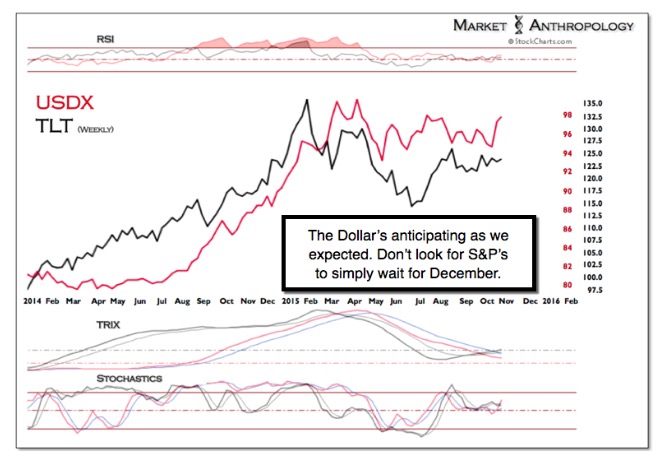 Now (many charts and analysis reserved for subscribing members); warning last week was a momentum thrust based largely on a response to the ECB 'gap-up rally', presumably running all stops (especially NASDAQ), I suspected we had to deal with this pattern to satiate fund managers eager to mark-up shares ahead of the end of (most of) their fiscal year-ends, which for sure was more pertinent that simply the month-end.

Basically November is in a more precarious state because October was strong (far more so than expected, and that's not bullish). Our bullish case for a firmer year-end rally rested (changes and implications of how it evolves or members). 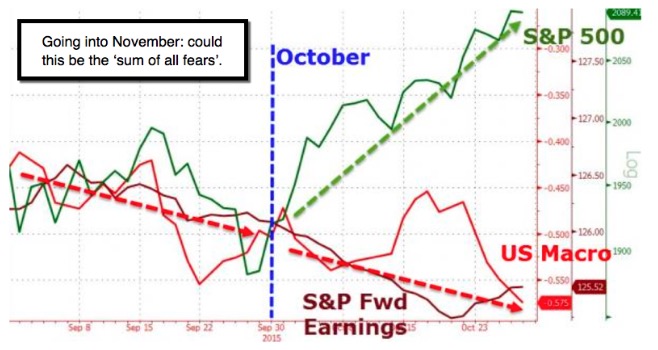 The bullish global case is underpinned by belief that global monetarists honed their skills sufficiently to stabilize markets, economics, and avert systemic risk. I might point out; they've always believed that to be the case, before, it seems, all crisis points and liquidity crisis encounters of the past. 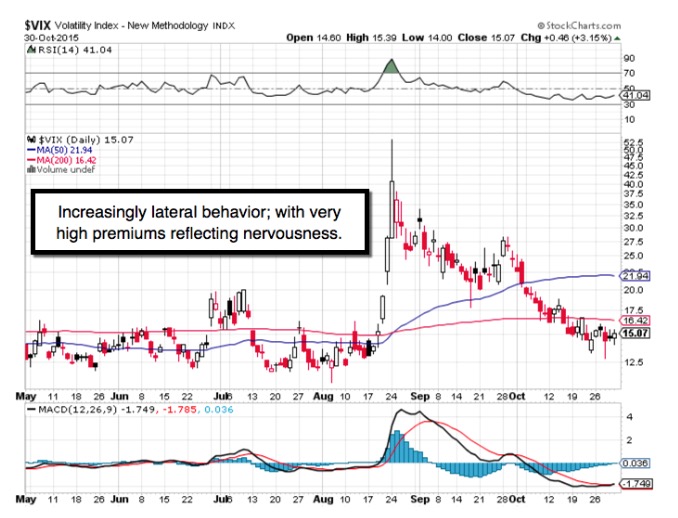 While believing China is going to again be a 'weak-link' in the perceive bullish story; geopolitics and global finance 'do' play a large roll in the global picture, even if the FOMC decided to back-off from their own concurrence on this; for perhaps the reason (outlined to subscribing members).

Combine the continued economic submergence of most of Asia, with ripples of discontent in Europe along with a failure to grow despite a soft overall Euro; to realize how this impacts trade, presses multinational margins; and then factor a stock market that's again fully overbought while multiples have expanded for no other reason than 'price' moving higher (without supportive better business) and you have a formula for a dangerous market, whether (redacted). Having a strong rather than weak October, diminishes views of November (reserved).

Daily action - was so quiet for a couple hours Friday, that we focused on 'not selling a dull market short'. That view changed as the market managed a spurt early in the afternoon; which in our approach set-up a reasonable shot at fades in the late going. Because of 'stories' of on-close net buying imbalances, there was a decent bounce in the final hour; which we suspected would fade late, as indeed occurred. And hence the retained guideline short-sale (with protection). 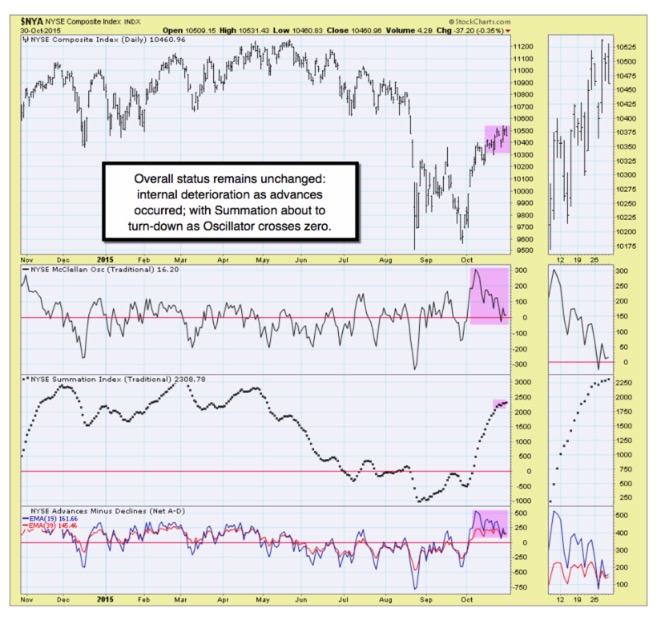 Tragically - near press time on Saturday, reports confirm all dead on what is a Russian flight (Kogalymavia Flight 9268; an Airbus A321) that was climbing to a flight path over the Mediterranean (most airlines avoid overflying Syria and it should be noted so did this Russian aircraft); and to which ISIS barbarians are claiming they targeted. The United States has offered assistance if needed; and ISIS 'bragging' about doing this murder will galvanize the Russian people in their fight against Islamism. This map details about all that is know so far. 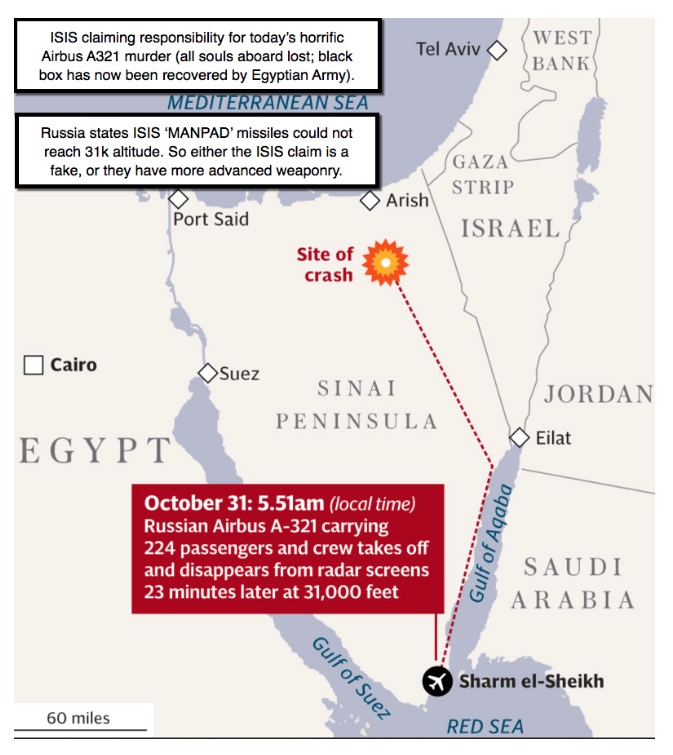 Going into the new trading week, we speculatively retain Friday afternoon's so far quite successful E-mini / Dec. S&P short-sale guideline from 2086-87, with break-even trading fixed mental stop. Investors should remain cautious at the same time as traders will need to be nimble as bulls won't give up easily. 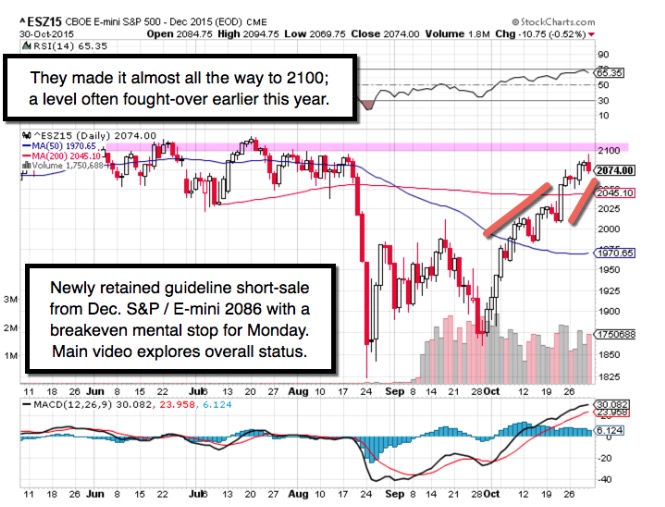 An hypnotic trance - describes how some bulls have been brainwashed to believe persisting low interest rates without Fed movement. That translates to a perpetual uptrend in the market; and that's entirely delusional. 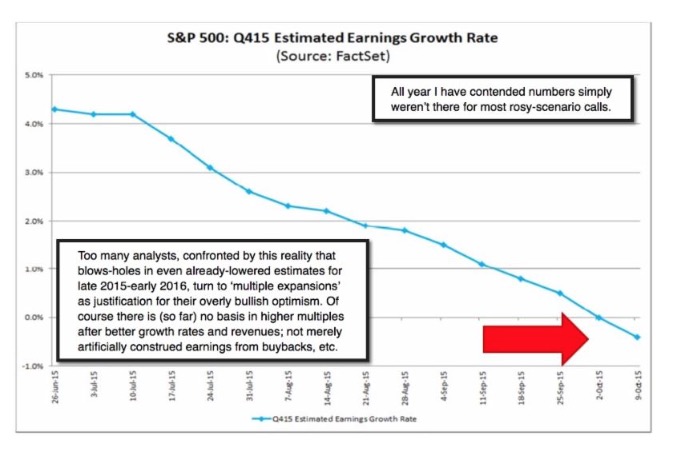 Bottom-line: this market remains (near) 'most' overbought it's been on a daily basis (stochastic work; not others) since just before the August breakdown; but that came after several weeks of 'erosion' that sapped market prior to the 'flash crash'. On a weekly basis it is just reaching overbought; (more). The amazing upside can be deceiving; rather it is part of a dangerous, even pivotal, battle in the days after this fund fiscal year-end.