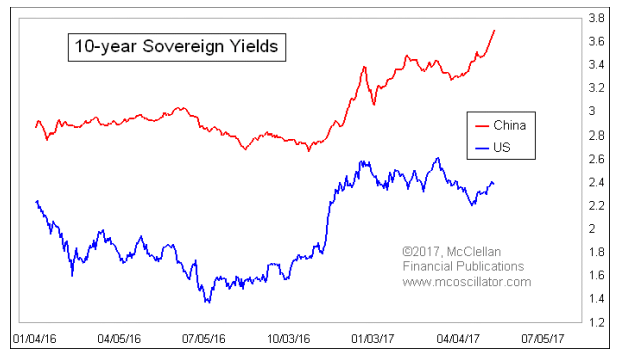 It is not a surprise that U.S. Treasury yields are correlated with those of other countries.  And so it should not be too much of a surprise that when China’s 10-year sovereign bond yield is zooming upward, that the U.S. 10-year T-Note yield should follow.

China’s 10-year yield is getting pressure from shorter maturities.  Their 5-year sovereign yield just pushed up above their 10-year yield for the first time since records began.  The moves are being credited to Beijing’s efforts to stop the slide in their currency.  Maybe China’s central bankers are believing former Fed Chairman Ben Bernanke’s 2007 statement, that “the yield curve could be inverted for a considerable period without significant implications for the economy as a whole, yes--- possibly for some banks, but not for the economy as a whole."  Yeah, that turned out well.

Whatever the cause, it appears to be having an effect on U.S. yields, as this week’s chart shows.  But while the chart shows what is currently happening, I like to have an idea about what is going to be happening.  And it turns out that these same data have a tell about that point.  When the two yields get too close together, or too far apart, that offers us information about what comes next.

Right now we are seeing a comparatively high spread between the two.  That condition typically means U.S. T-Note yields have further to rise.  Conversely, a very low spread, below the lower band, says that U.S. yields should fall in the weeks that follow.

But that predictive effect really only works on what the U.S. yields are going to do.  It does not necessarily tell us what the Chinese 10-year yields will do.  For that, there is a perhaps even more interesting relationship:

It turns out that the Chinese 10-year yield and copper prices are very closely correlated.  That’s not much of a surprise.  But the fun part is that when the two disagree, it is copper that usually ends up being right about where both are headed.