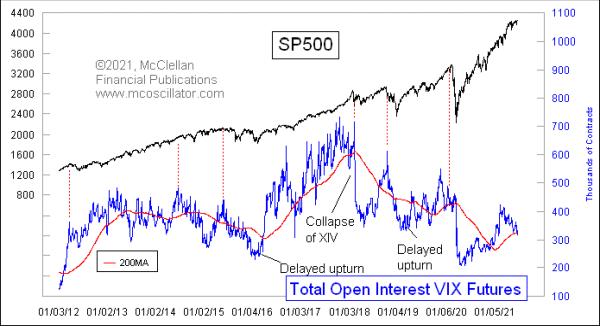 Anyone can look at the VIX to get sentiment indications about the stock market. That's beginner stuff, although still pretty good. The real fun lies in going deeper into data that no one else looks at to find the fun insights.

This week's chart shows the total open interest in VIX futures. VIX futures first traded in 2004, but they did not really get going as a trading vehicle until around 2012, which is where the chart picks up the story. Normally, total open interest moves up and down with stock prices. That's the normal relationship.

It gets interesting when open interest moves too far in one direction or the other, or when the behavior changes. Here in 2021, we are seeing a change in behavior. Total open interest has been falling since the peak in February and is now down to the 200-day moving average, even though prices are continuing higher. This is the change in behavior that is so important to note. It is critical to observe that, for the time period since VIX futures first started trading in 2004, the important price tops for the S&P 500 have appeared when VIX open interest is up well above its 200-MA.

I should clarify further that just being up well above the 200-MA is not by itself enough to put in a top. Prices can keep going up despite such a condition.

Rather, the point of this is that having VIX open interest below the 200-MA is useful for ruling out the possibility that prices are now at a major top. It is a missing topping condition. So we have some assurance that there should still be a lot more for prices to run higher. At the point when we see hedge funds getting excited again about trading the VIX futures, and see open interest numbers rising up to well above the 200-MA, then we can worry about a meaningful top for stock prices.