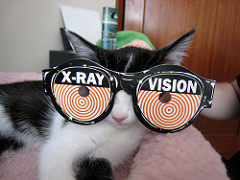 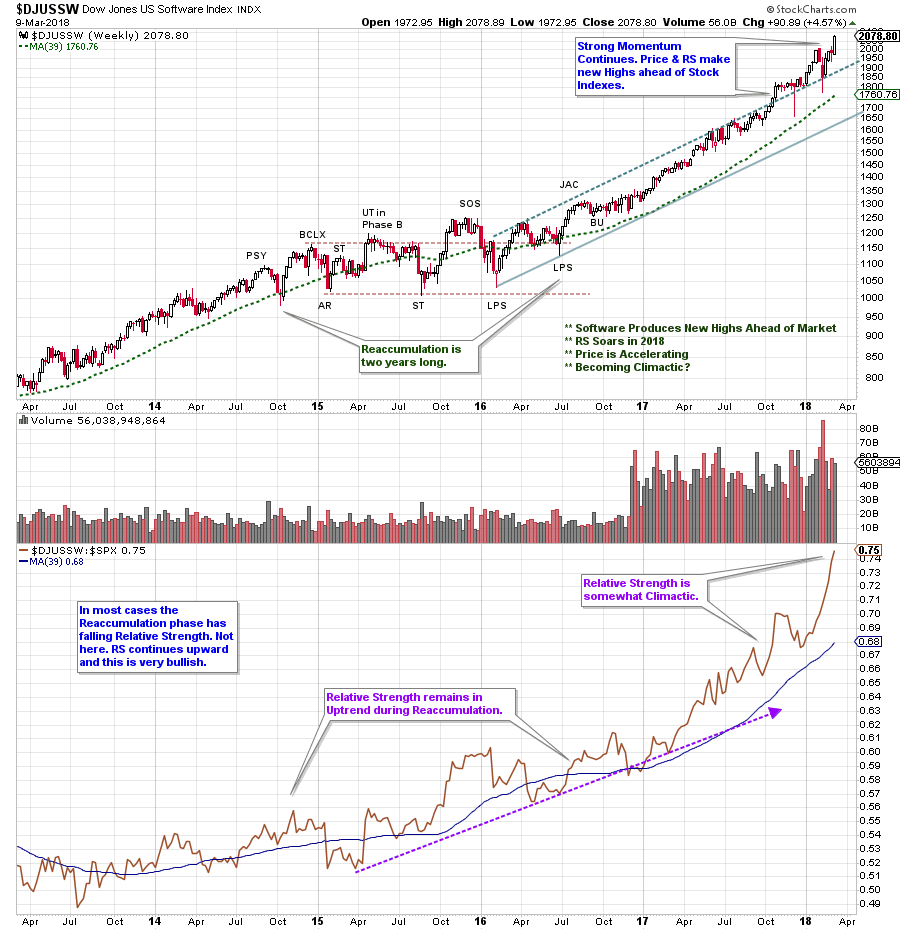 This very long term rising trend for the Software Industry Group ($DJUSSW) is a uniquely bullish example. Typically, when a Reaccumulation structure interrupts a long term uptrend, the RS becomes weak. During the 2015-16 Reaccumulation of $DJUSSW the Relative Strength keeps rising, which is a very bullish indication. The uptrend that follows the Reaccumulation is very strong. RS accelerates which confirms to institutions that these stocks should be held and the portfolio allocation to this group be increased during the uptrend. 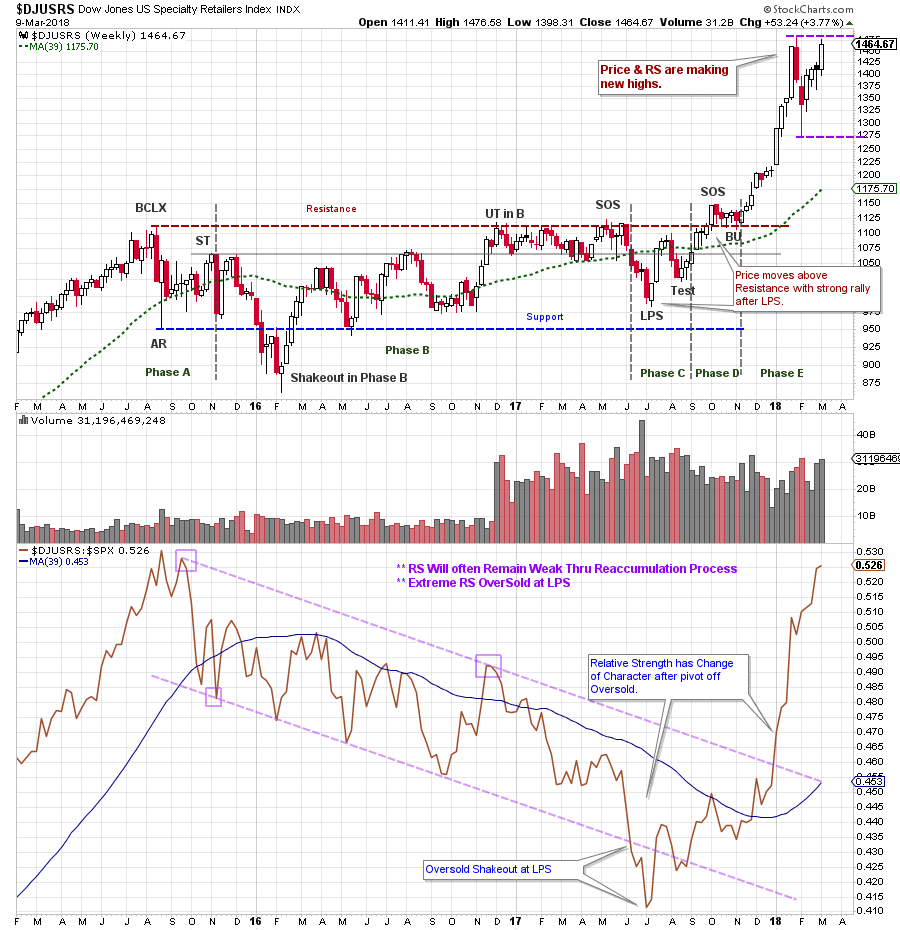 Here is a more typical picture as a Reaccumulation forms over two years in Specialty Retail ($DJUSRS). The RS line is confirmed downward while the price index is tracing out a seeming Reaccumulation. The downward trend channel and the falling moving average line illustrate that institutions are being punished for owning these stocks. Meanwhile the Composite Operator (C.O.) appears to be Accumulating shares for a major bull campaign. The C.O. typically buys stock under the cover of weak Relative Strength which discourages institutions and the public. As Wyckoffians, our job is to patiently wait for the conclusion of Reaccumulation when the stocks in the industry group become active. This would be on the strength of price following the Last Point of Support (LPS). Note how this coincides with an oversold thrust under the RS trend channel and a strong RS rally into the end of 2017. On the price chart the LPS, the Test, and the Back Up (BU) are excellent buy points (with Stops just below those price lows). The steady rise of the RS confirms that Specialty Retail has been Absorbed over the prior two years and is held by very strong hands. We conclude that a major uptrend is underway. 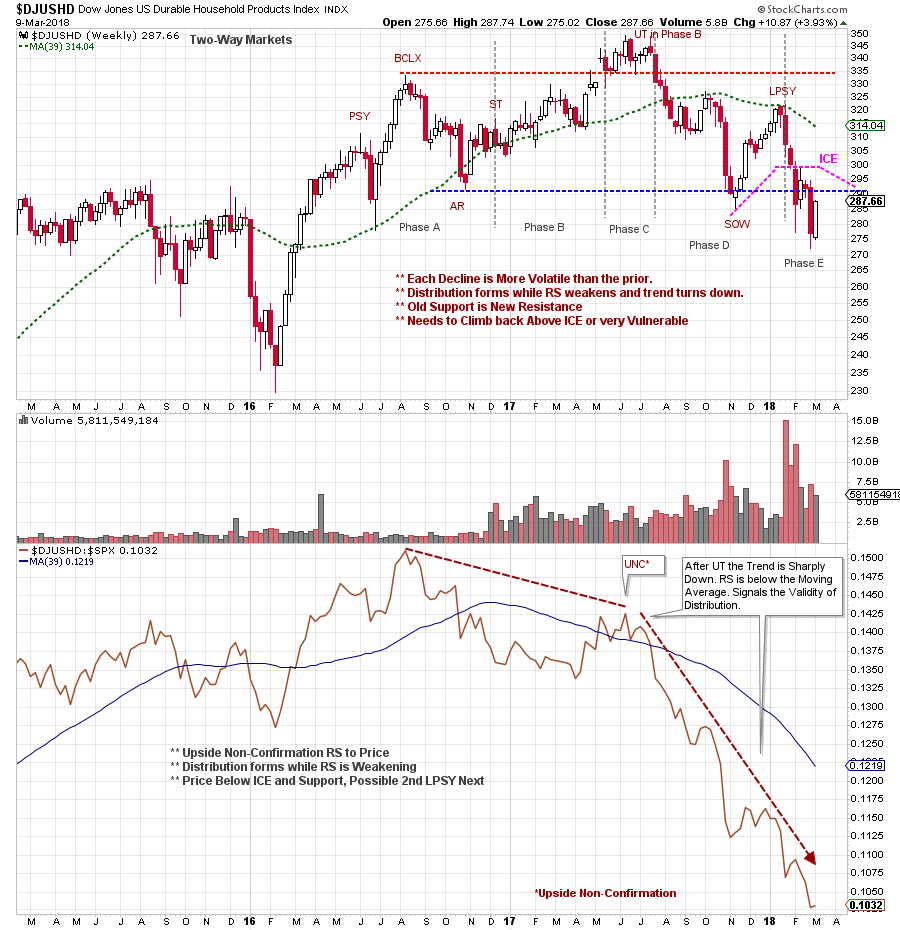 An Upside Non-Confirmation (UNC) forms at the Upthrust (UT) when the RS makes a lower peak. Price is making a new high while the RS is not, and this is a warning. When the UT fails the RS becomes very weak. Distribution in Durable Household Products ($DJUSHD) is now evident. At the Last Point of Supply (LPSY) the RS line is in a freefall. Relative Strength did a valuable job of warning and confirming the Distribution in this industry group. 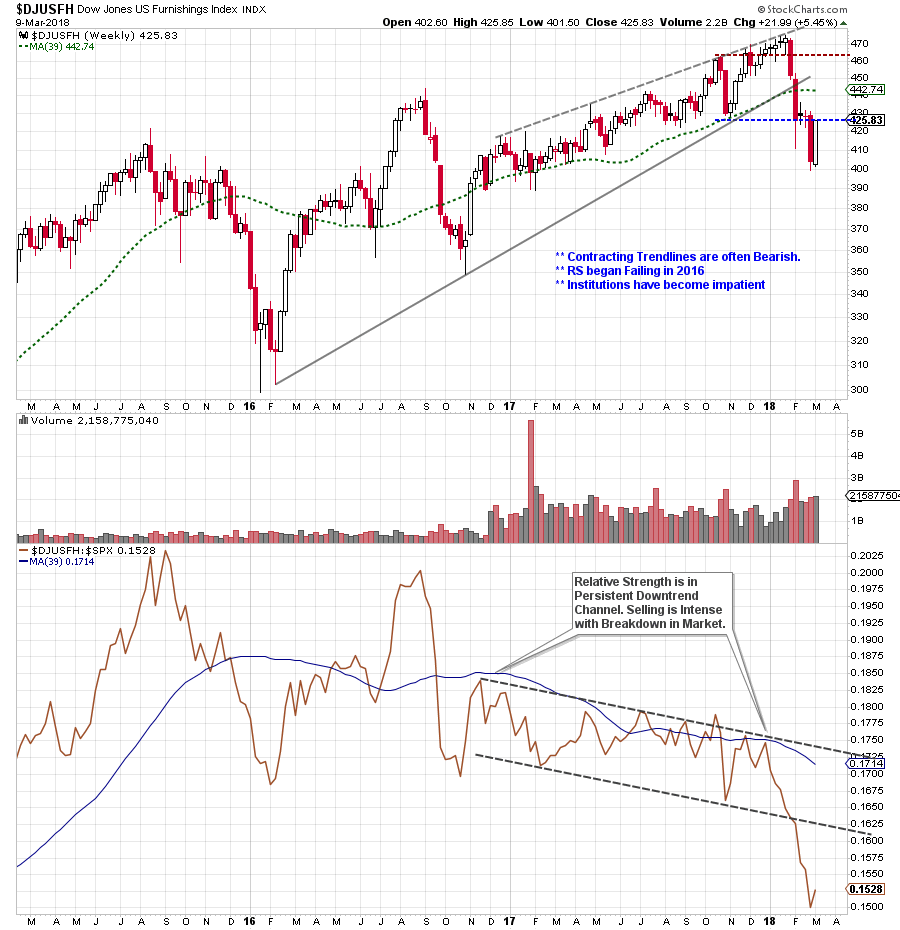 U.S. Furnishings ($DJUSFH) Relative Strength has been making lower peaks since 2016. Meanwhile the price chart has been making minor new highs. Throughout 2017 Relative Strength has been in a narrow declining channel. Weakness in late January for the broad market produces a very sharp decline in $DJUSFH as institutions sell this group aggressively. The declining RS accelerates lower on this selling. This is a subtle, but excellent, example of the power of Relative Strength studies. RS was not confirming the higher prices for $DJUSFH. Institutions used this group as a source of funds as they liquidated holdings and rotated in to better performing industry groups.

Relative Strength is like X-Ray vision for Wyckoffians. It very often provides a clue about the emerging new direction of the price trend. And it keeps us in the trend for the majority of the move.

Wyckoff Power Charting will not be published next week. Have a great week.