Bottom-pickers and knife-catchers are no doubt eyeing current levels as the major index ETFs tests the early August lows. After a sharp decline the first week of August, trading turned very volatile with four consecutive 4+ percent swings in SPY (down,up,down,up). There was a little follow through to the last 4+ percent surge as SPY edged above 120 early last week. This strength did not last long as stocks moved sharply lower on Thursday and Friday. The index ended the week down 4.64%. Eight of the nine sectors were also sharply lower. The Consumer Staples SPDR (XLP) edged .03% higher and the Utilities SPDR (XLU) gained 2.18% on the week. Defense was clearly the name of the game.

With last week's sharp decline, SPY is near the lows established on August 8th, 10th and 11th. Also note that an inverted hammer formed on Friday. These bullish candlestick reversals form with a long upper shadow and small body near the low of the day. The long upper shadow shows a failed intraday rally. The bulls were able to push prices higher, but were beaten back by the close. Despite the failure, the bulls did not completely give up on Friday. The high of this pattern becomes the first resistance level to watch. A move above 116 would be the first sign of a short-term trend reversal. At this point, I still consider the bigger trend down. This means any advance from current levels would be considered an oversold bounce within a bigger downtrend. Also note that the Kansas City Fed Conference in Jackson Hole starts Thursday and Bernanke is speaking on Friday at 10AM ET. 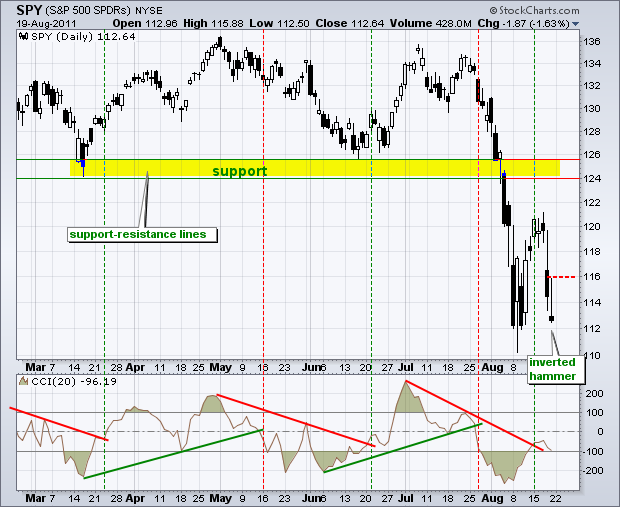 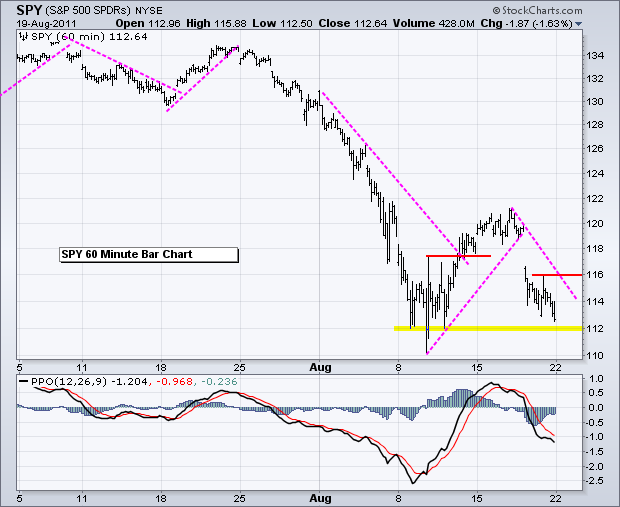 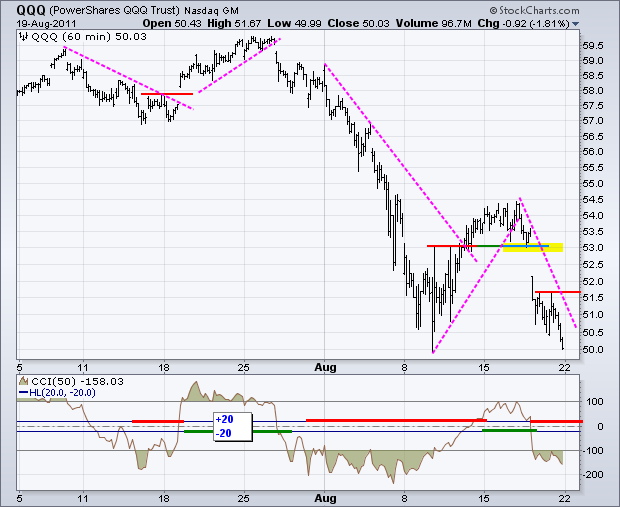 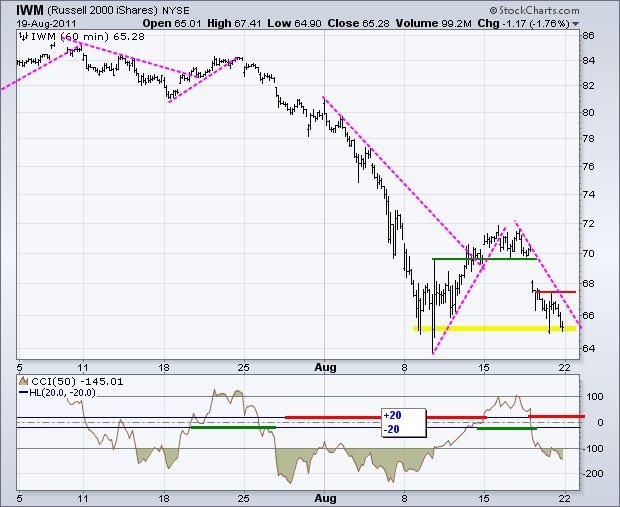 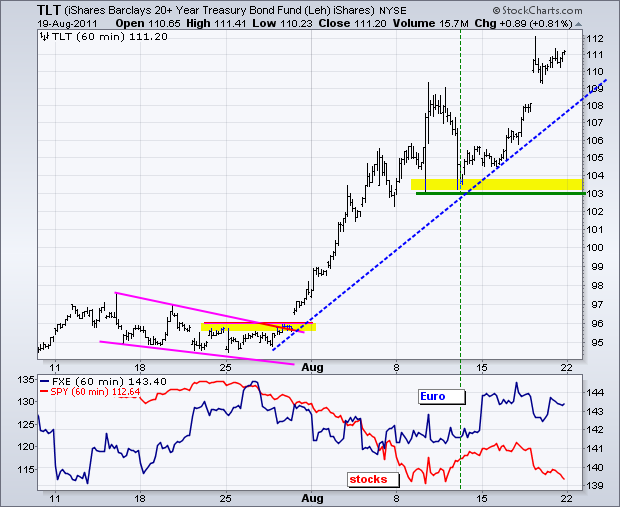 Bonds surged and stocks plunged, but the US Dollar Fund (UUP) could not forge a breakout. The markets are clearly in risk-off or safe-haven mode right now. This is a Dollar bullish environment, but the Dollar is not moving higher as UUP remains in a downtrend the last 2 1/2 weeks. Last week's high marks key resistance. A move above this level is needed to reverse the downtrend and call for a higher Dollar. 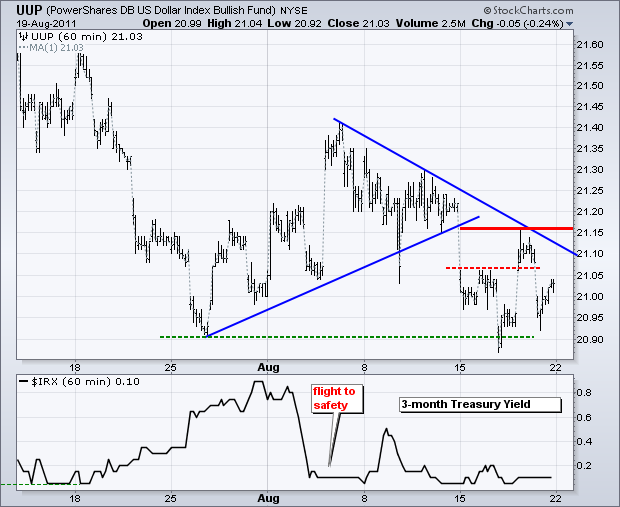 Weakness in the stock market and a deteriorating economic outlook are weighing on oil. The 12-Month US Oil Fund (USL) gapped down and moved into a short-term downtrend. A bounce in the stock market, and perhaps fall in the Dollar, would put a bid into oil. As with SPY, I am marking first resistance at Friday's high. 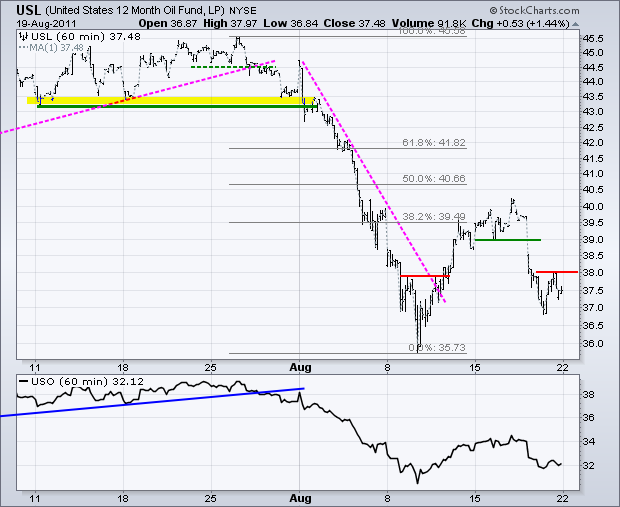 The Gold SPDR (GLD) chart remains the same as the 20+ year Bond ETF chart. Both are in strong uptrends bordering on parabolic. GLD is up around 14% this month alone. The steep blue trendline marks the first support, while broken resistance turns into second support in the 174 area. 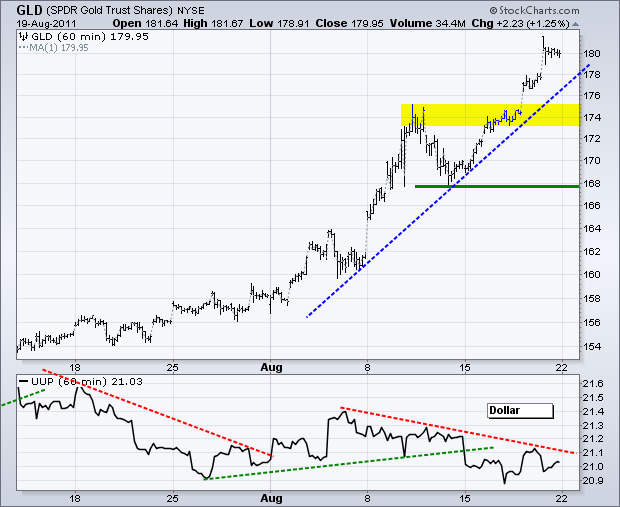