With another strong close and leadership from large-cap tech stocks, SPY and QQQ extended their uptrends and there is no change in the overall picture. Stocks remain overbought and ripe for a corrective period, which could form as a pullback or a flat consolidation. As noted last week, many pundits are looking for this correction, perhaps too many. In contrast to SPY and QQQ, small-caps have undergone a corrective period the last four weeks as IWM trades in a sideways range. Even though IWM is underperforming, it has yet to actually break down and show absolute weakness. On the S&P 500 ETF (SPY) chart, the ETF bounced off the trendline extending up from 20-Dec and closed above 137 on Monday and Tuesday. Simply put, we have yet to see any major support breaks or signs of significant selling pressure. SPY continues to record new highs. The 11-week trendline extending up from 19-Dec marks first support around 136 and last week's lows mark key support at 134. RSI support remains at 40. 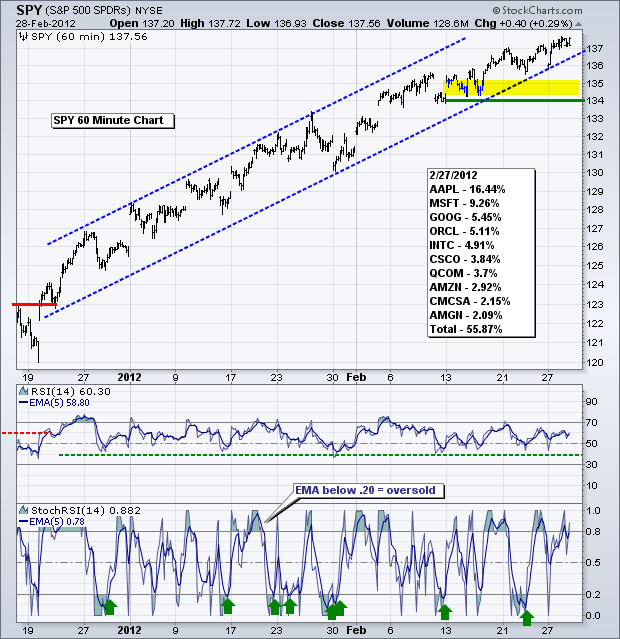 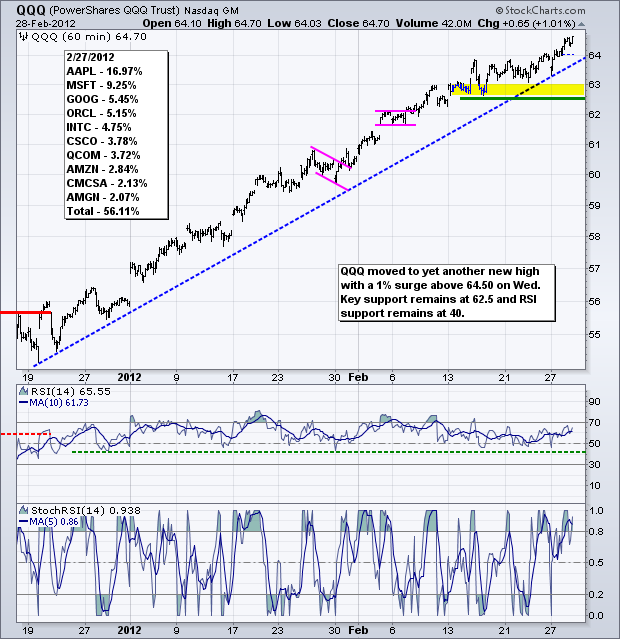 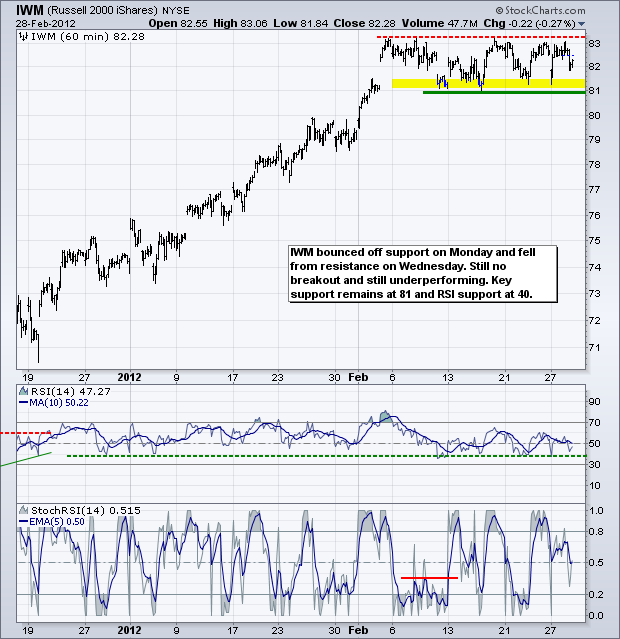 Oil surged last week and treasuries also surged. Oil declined rather sharply on Tuesday and treasuries also declined. Go figure. I thought rising oil prices would stoke inflationary pressures and be negative for treasuries. The rise in oil and gasoline prices, however, may be detrimental to the economy and this may be pushing yields lower (treasuries higher). On the price chart, the 20+ Year T-Bond ETF (TLT) surged above its mid February high and then hit resistance from the trendline extending down from 19-Dec. The swing within the 11 week downtrend is up and I am marking first support at 117.50. A break below this level would reverse the seven day upswing. 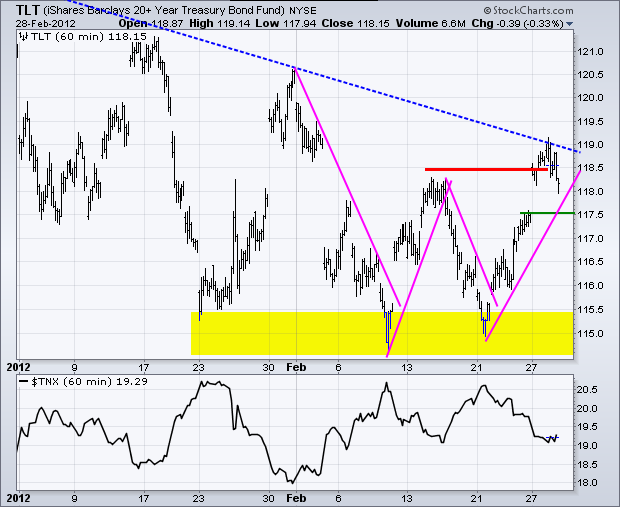 The US Dollar Fund (UUP) sank further on Tuesday with a close below 21.80 on the day. The trend since mid January is down and the swing within this trend is also down (pink falling channel). I am lowering first resistance to 21.92. Even though a break above this level would be the first positive sign, the bigger downtrend remains in force with key resistance at 22.30. RSI resistance remains at 60. 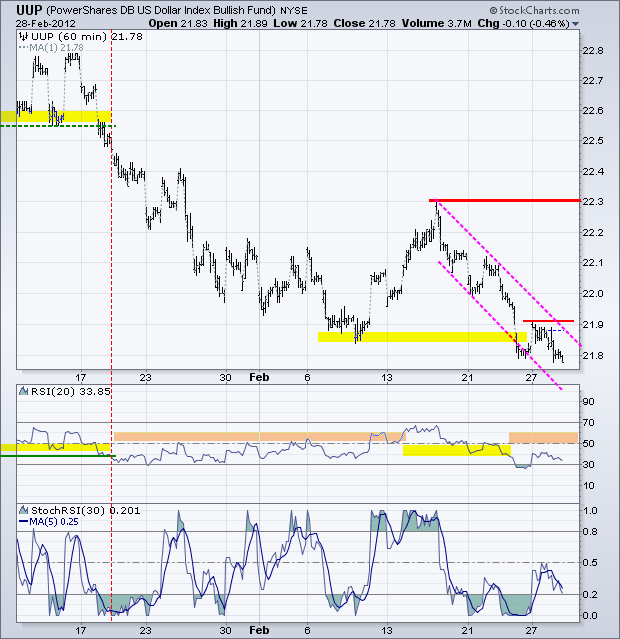 After a big surge from 37 to 42 (13.5%), the US Oil Fund (USO) corrected with a sharp decline below 41 the last two days. The first support zone is at hand as the ETF hit last week's consolidation and RSI hit the 40-50 zone. Also note that the ETF is a little short-term oversold after a 2.9% decline in just two days. Further down, the February trendline and the 50% retracement line mark support in the 39.5 area. 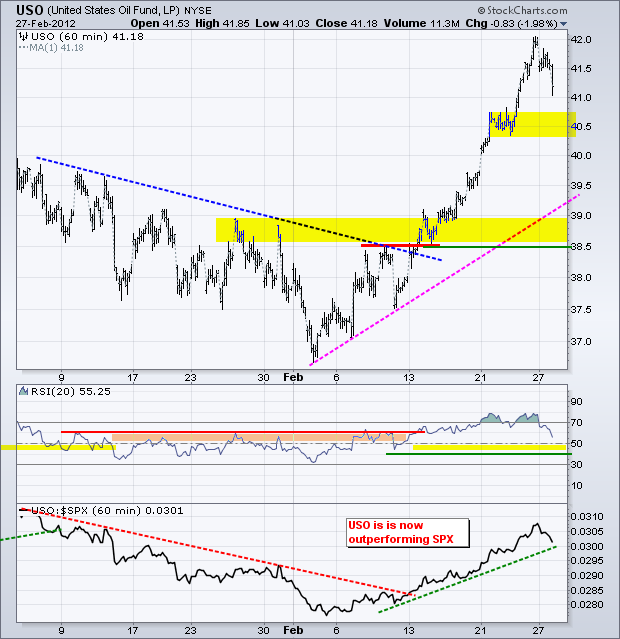 The Gold SPDR (GLD) broke resistance from the small falling flag with a surge above 173. This week's lows mark the first support level, but I am going to leave my first support zone at 169-170, which marked resistance from the bigger flag breakout. Fundamentally, gold could be moving higher because the second LTRO round in Europe will significantly expand the ECB's balance sheet and flood the Eurozone banks with money. 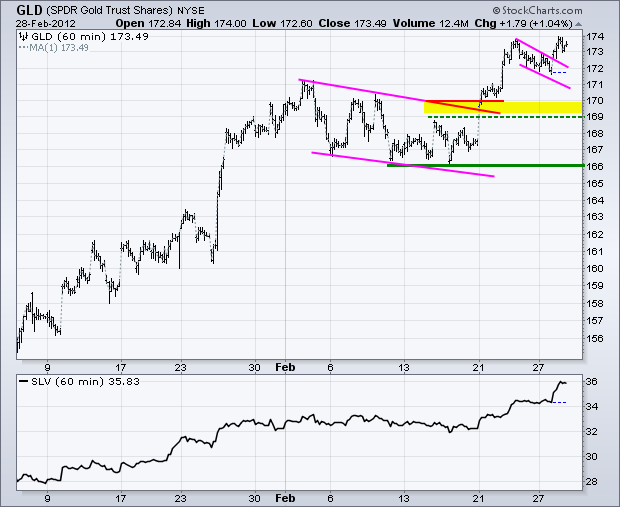