Click here to see the live version Click here to see the live version
×
Stocks meandered around on Monday as trading turned quite mixed. The Nasdaq 100 ETF (QQQ) edged higher, while the S&P MidCap 400 SPDR (MDY) edged lower. Apple caught a bid ahead of its earnings report on Thursday. The sectors were also mixed with the Basic Materials SPDR (XLB) gaining .46% and the Energy SPDR (XLE) losing .50% on the day. Strength in steel, coal and gold miners lifted the materials sector. The Gold Miners ETF (GDX) surged in August-September and then consolidated with a falling wedge the last four weeks. A break above last week's high would reverse this short-term downtrend. 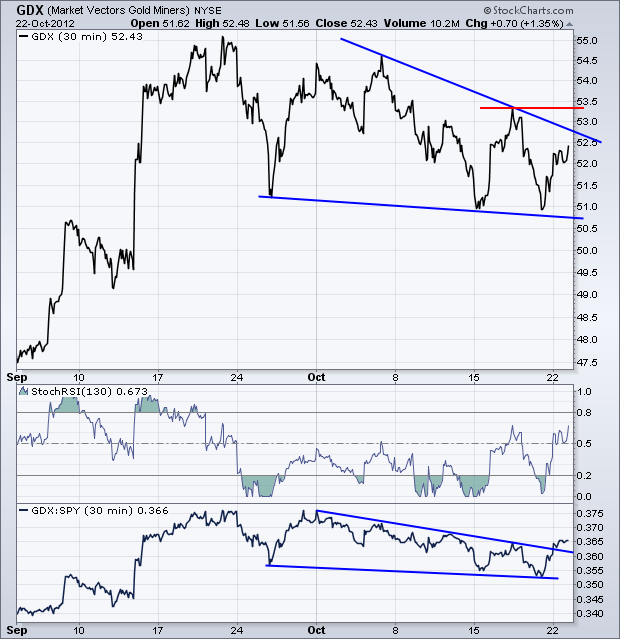 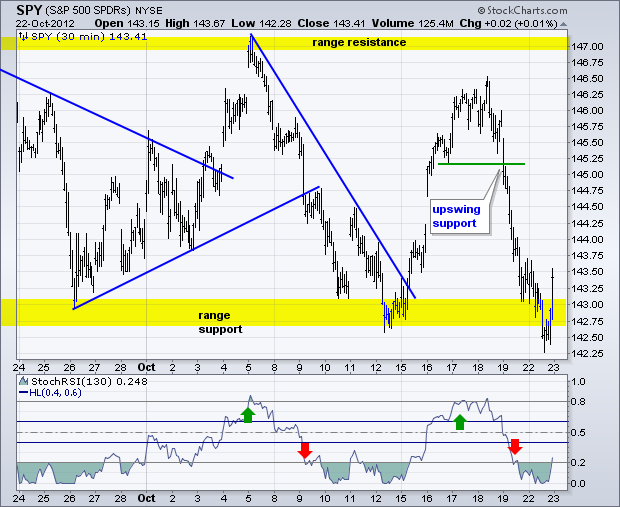 SPY broke below its mid October low, but recovered in the final hour with a surge above 143. The six week trend remains very choppy with a slight downward slant. The swing within this six week trend is down after last week's support break. Marking downswing resistance is a challenge here. I could set resistance at 143.75, but this does not allow much of a buffer for a short oversold bounce. SPY was oversold when below 142.50 and some sort of oversold bounce or consolidation would be normal. I will set resistance at 145.25 for now and lower it later. 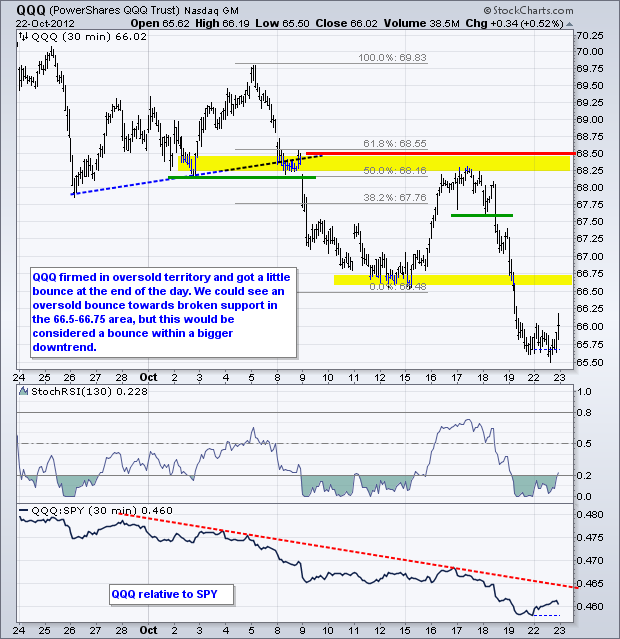 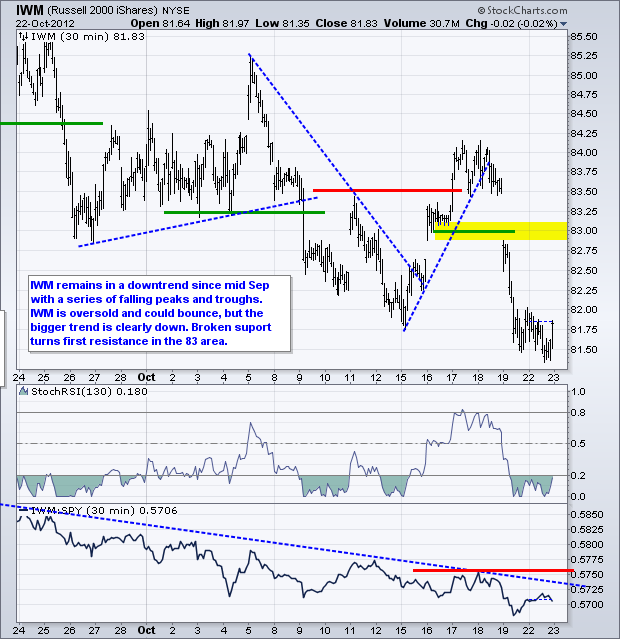 The 20+ Year T-Bond ETF (TLT) got an oversold bounce on Friday and hit resistance just below 122 on Monday. Treasuries lost some of their luster as stocks and the Euro firmed on Monday. The failure at 122 reinforces this level as key short-term resistance. A break above 122 and StochRSI break above .60 would reverse the short-term downtrend. 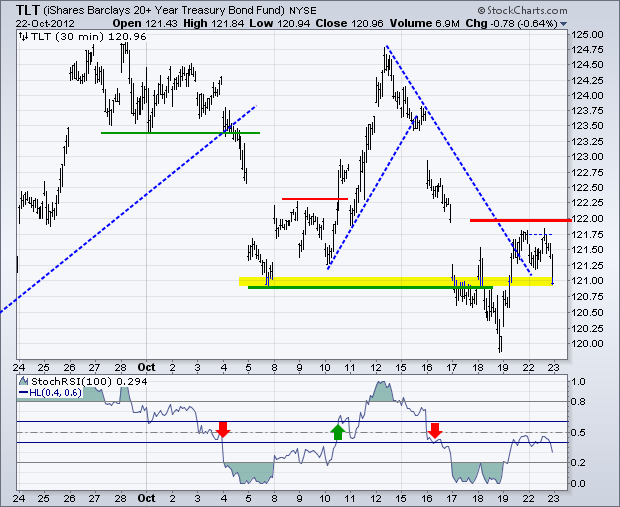 The US Dollar Fund (UUP) surged last week and then stalled in the 21.80 area. The short-term swing is up, but the bigger trend is down with key resistance at the October highs. The one-week trend line and Monday's low mark first support. I am going to add a little buffer and set swing support at 21.725 for now. 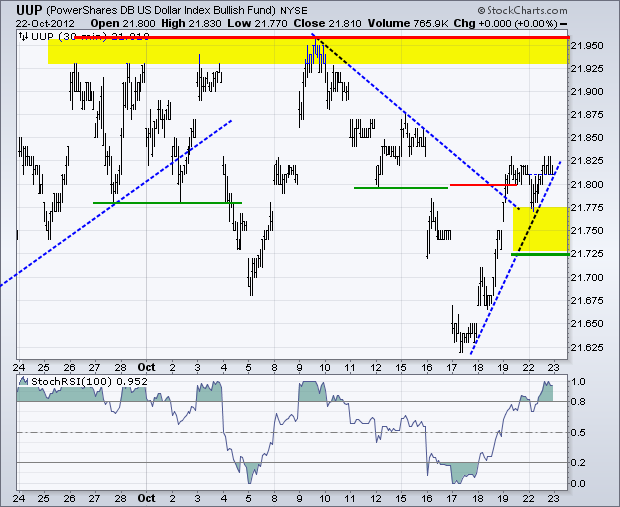 The US Oil Fund (USO) broke down in mid September and held this breakdown as broken support turned into resistance. With a sharp decline the last two days, USO broke short-term support from last week's low to signal a continuation lower. This breakdown further reinforces resistance in the 34.5-34.75 area. 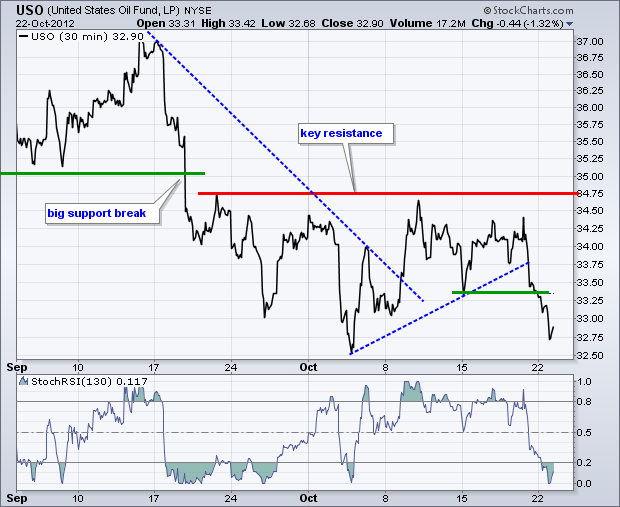 No change. The Gold SPDR (GLD) broke support in mid October and broken support turned into resistance mid week. With a move to new lows, GLD remains in a short-term downtrend. Even though this looks like a correction after the big August-September surge, we could see more correction towards the 162 area before all is said and done. Key resistance remains at 170.50 for now. Notice how StochRSI became oversold several times during this downtrend and never reached overbought levels. 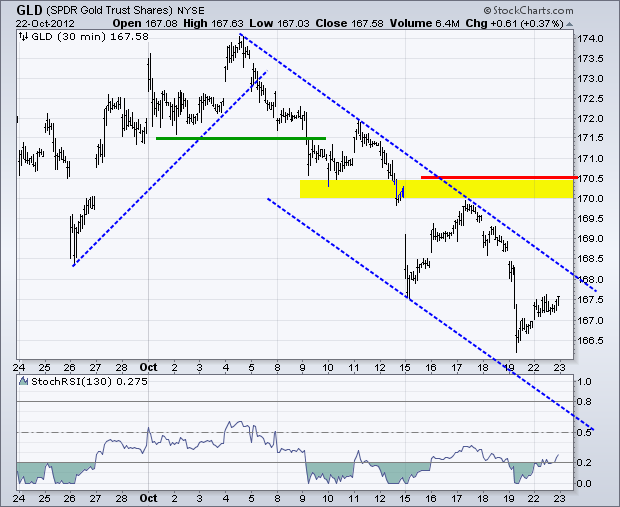