Click here to see the live version Click here to see the live version
×
Tech stocks got whacked again as Google and Microsoft came up short on their earnings reports. The trend in worse-than-expected earnings continues, especially for tech companies and especially for tech companies tied to the PC (Microsoft, Intel, AMD, Checkpoint, HP). The Technology SPDR (XLK) was already underperforming the broader market and this underperformance increased with Thursday's weakness. As the PerfChart below shows, XLK is now down 1.32% since the beginning of September. The Finance SPDR (XLF) is offsetting this weakness with an 8.17% gain. Meanwhile the Technology SPDR (XLK) and the Consumer Discretionary SPDR (XLY) are performing in line. 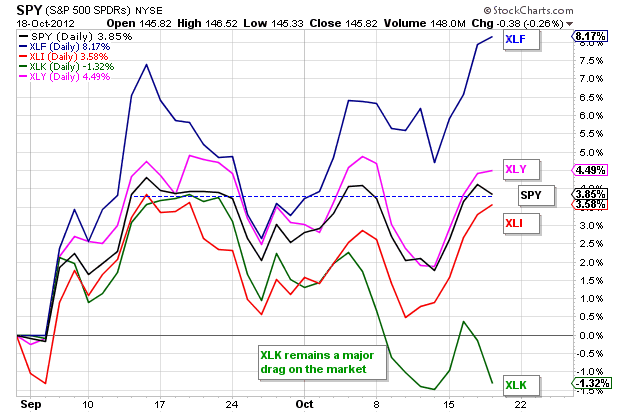 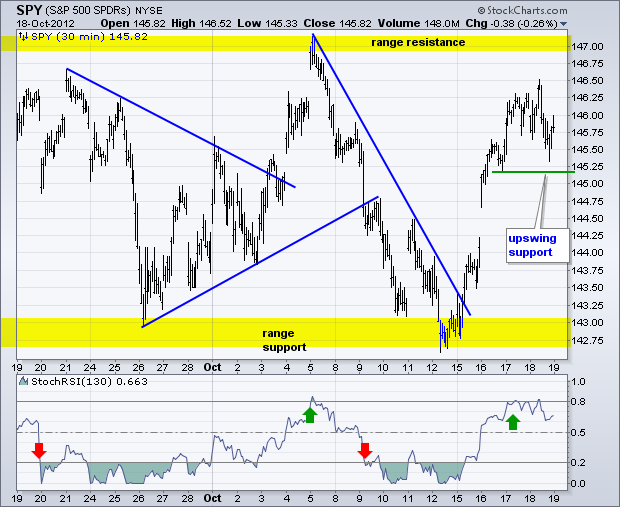 The S&P 500 ETF (SPY) has been stuck in a trading range since mid September. Thursday's close is near the 13-Sept close and the ETF has gone nowhere the last five weeks. This could be a consolidation within a bigger uptrend, but it is hard to bet with the bulls when the technology sector is so weak. Also note that small-caps have been lagging since mid September. On the 30-minute chart above, SPY has been swinging from support to resistance the last few weeks. Even though the current swing is up, resistance is nigh and the ETF is stalling in the 145.75 area. The Tuesday afternoon low and Thursday afternoon low combine to mark support in the 145.25 area. A break below these lows would reverse the upswing and target another support test. Support may not hold this time. 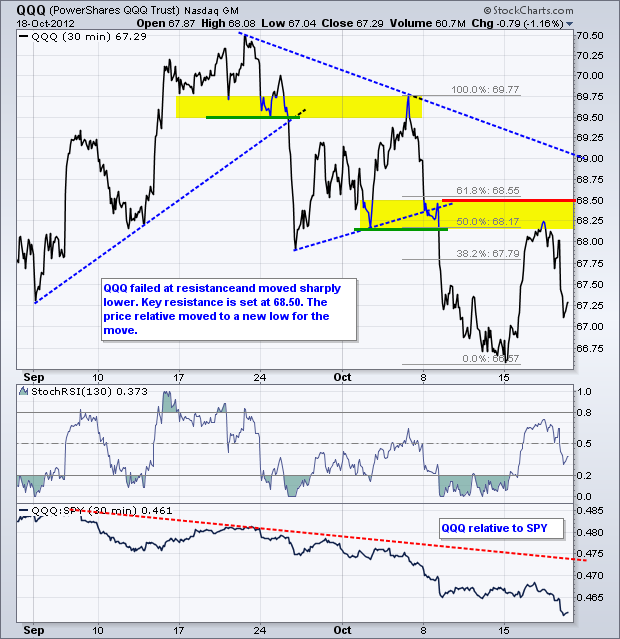 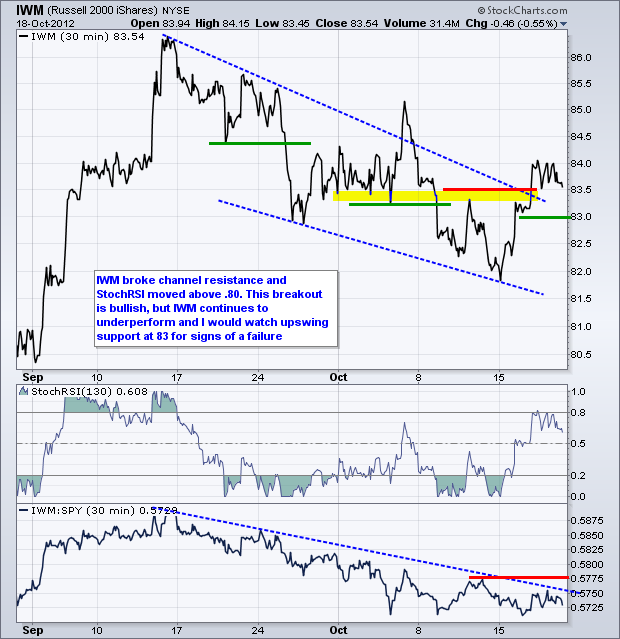 Wow, stocks, the Euro and treasuries moved lower on Thursday. Something is not quite right here. Treasuries should move higher when stocks and the Euro are weak. Perhaps treasuries are not that worried about technology stocks. The 20+ Year T-Bond ETF (TLT) remains in a downswing and I am moving key resistance to 122. The five day trend line and broken support mark resistance here. A move above this level would reverse the short-term downtrend and this would be bearish for stocks overall. 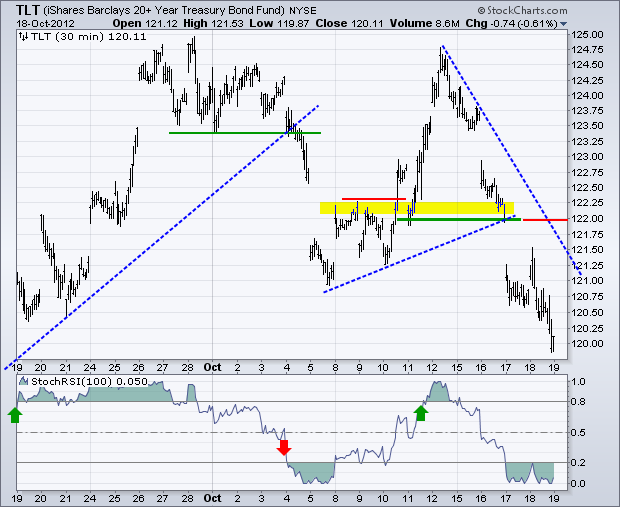 The US Dollar Fund (UUP) got a pretty good bounce on Thursday, but remains in a downswing as well. I am lowering downswing resistance to 21.80, which is based on the eight day trend line and broken support. A move above this level would reverse the downswing, but not the medium-term downtrend, which would require a break above the September-October highs. 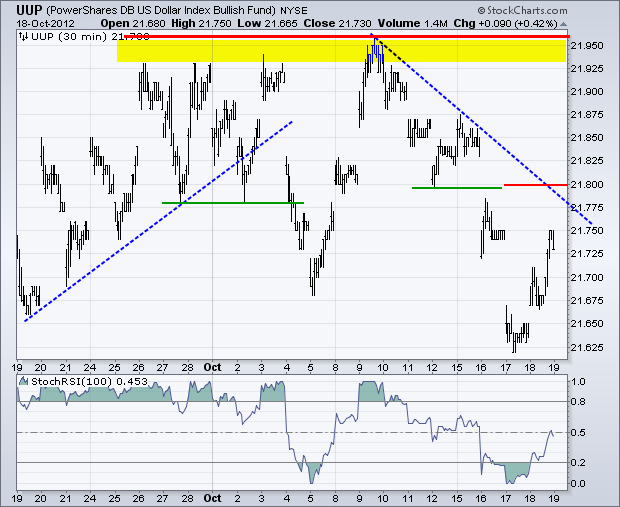 No change. The US Oil Fund (USO) remains with a falling flag breakout, but this breakout is not looking healthy. Even though the Dollar declined and stocks advanced the last three days, USO remains below key resistance and did not react the last two days. A follow through break above 34.75 is needed to complete this trend reversal. I will mark support at 33.25 and a break below this level would signal a continuation of the September decline. 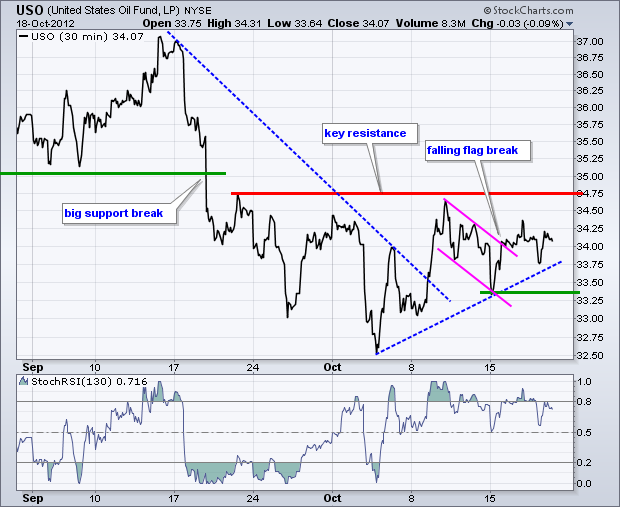 No change. The Gold SPDR (GLD) rebounded as the Dollar fell this week. However, this rebound is nearing a moment-of-truth already. Notice that broken support turns into resistance in the 170.5 area. Resistance here is further confirmed by the early October trend line. A break above 170.5 is needed to reverse this short-term downtrend. 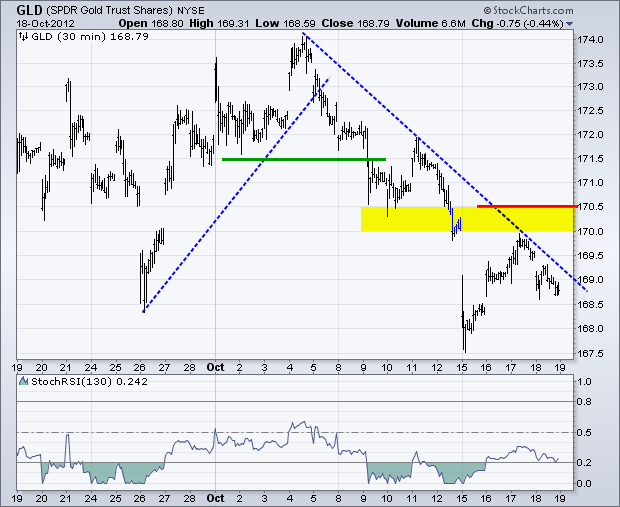