Click here to see the live version Click here to see the live version
×
Stocks managed to eek out small gains on Thursday as the Russell 2000 ETF (IWM) advanced .41% and the Nasdaq 100 Equal-Weight ETF (QQEW) added .52%. Note, however, that the Nasdaq 100 ETF (QQQ) closed down a fraction (.01%). Stocks were under selling pressure after the close as Amazon and Apple disappointed on both the third quarter and their outlooks. It looks like we have a real tablet war on our hands now (iPad, Surface, Galaxy, Kindle, Nook...). The Consumer Discretionary SPDR (XLY) and the Technology SPDR (XLK) also edged lower. The Home Construction iShares (ITB) led the consumer discretionary lower, while the Networking iShares (IGN) led the technology sector lower. Wall Street will no doubt be happy when third quarter earnings season ends because it has been a big disappointment. Unfortunately, Wall Street can then turn its attention to the election and the fiscal cliff. 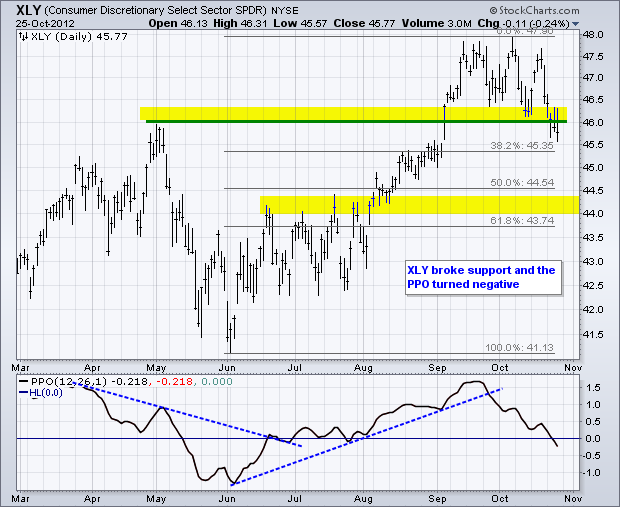 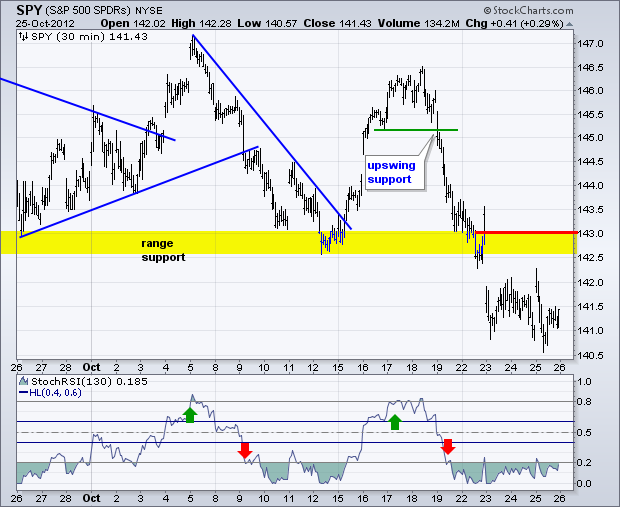 Trading was quite erratic on Thursday as SPY surged above 142 on the open, plunged below 141 and then settled in the 141.5 area. The ETF is basically consolidating in oversold territory. We could still see an oversold bounce, but this would be considered a counter-trend move. Broken support turns first resistance in the 142.5-143 area. 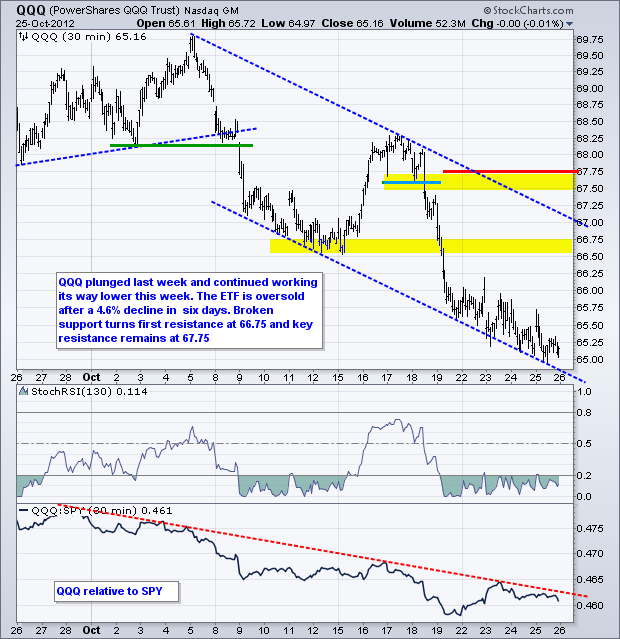 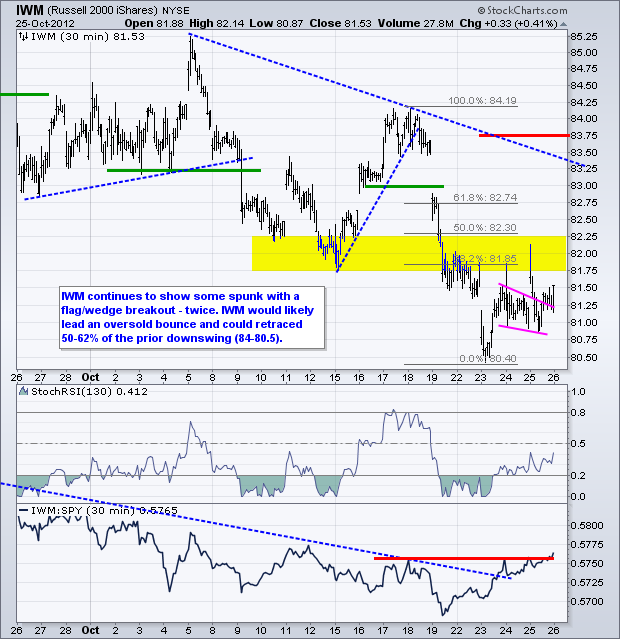 No change. The 20+ Year T-Bond ETF (TLT) is in a medium-term downtrend since late July and a short-term downtrend since the late September peak. The decline since late September has been very choppy with sharp reaction rallies and even sharper declines. TLT surged as stocks fell, but then fell back the last three days. At this point, I am tempted to go with the bigger downtrends. This means the failure in the 50-61.80% retracement zone and the rising channel break are bearish. First resistance is at 122.25 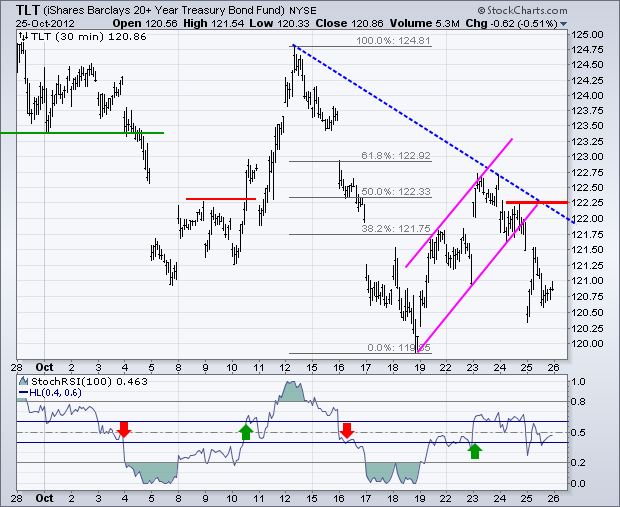 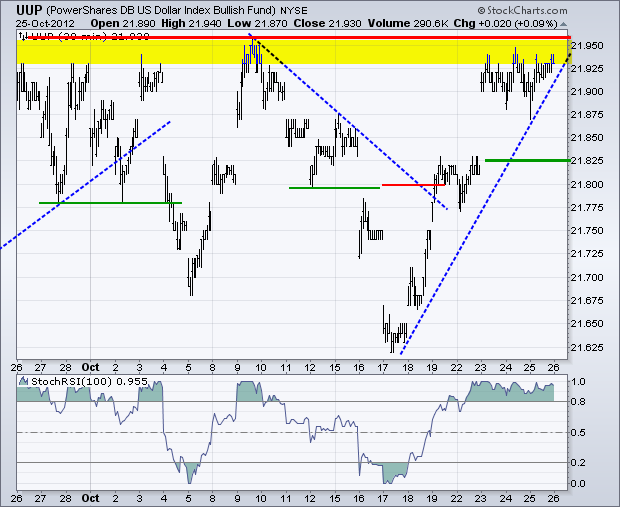 No change. The US Oil Fund (USO) broke down in mid September and held this breakdown as broken support turned into resistance. With a sharp decline the last three days, USO broke short-term support from last week's low to signal a continuation lower. This breakdown further reinforces resistance in the 34.5-34.75 area. 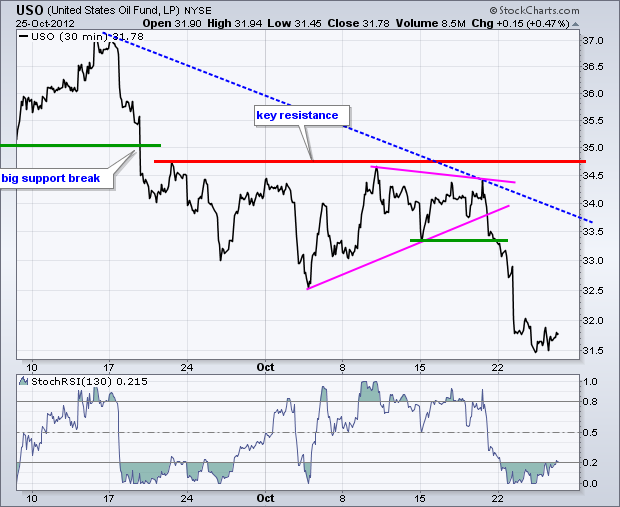 The Gold SPDR (GLD) got an oversold bounce on Thursday, even as stocks remained soft and the Dollar hugged resistance. The ETF remains within a falling channel and clear downtrend though. I am lowering key resistance to 168. This level stems from broken support. A move above 168 would break the channel and exceed Monday's high. This would be enough to reverse the three week downtrend. 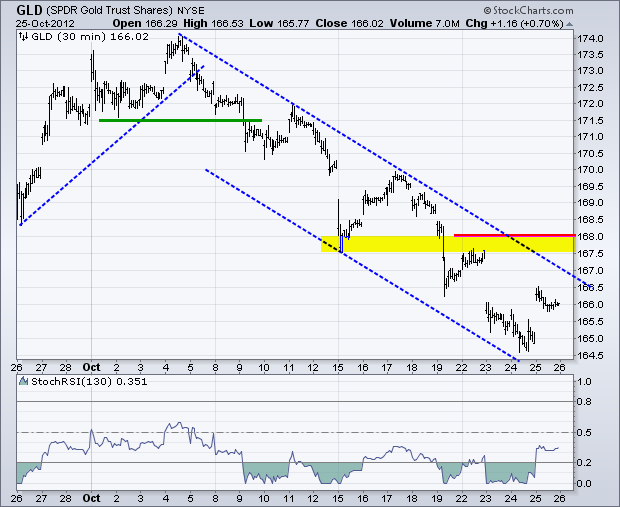