...There are plenty of reasons to be negative on stocks right now, but the weight of the evidence still favors the bulls. On the negative side, we have bearish seasonal patterns at work, strength in safe-haven bonds, downtrends in XLF and XLI, and relative weakness in the S&P 500 (relative to small-caps).

On the positive side, the 50-day EMA is still above the 200-day EMA for the S&P 500 and this key benchmark is still in a long-term uptrend. Furthermore, the Small-Cap SPDR (IJR), Nasdaq 100 SPDR (QQQ), the Retail SPDR (XRT) and the Regional Bank SPDR hit new highs earlier this month, as did a host of tech-related ETFs.

As always, we must take an objective look and apply a weight of the evidence approach when it comes to broad market analysis. Stocks were hit in June, but these hits are not any worse than the pullbacks seen earlier this year. 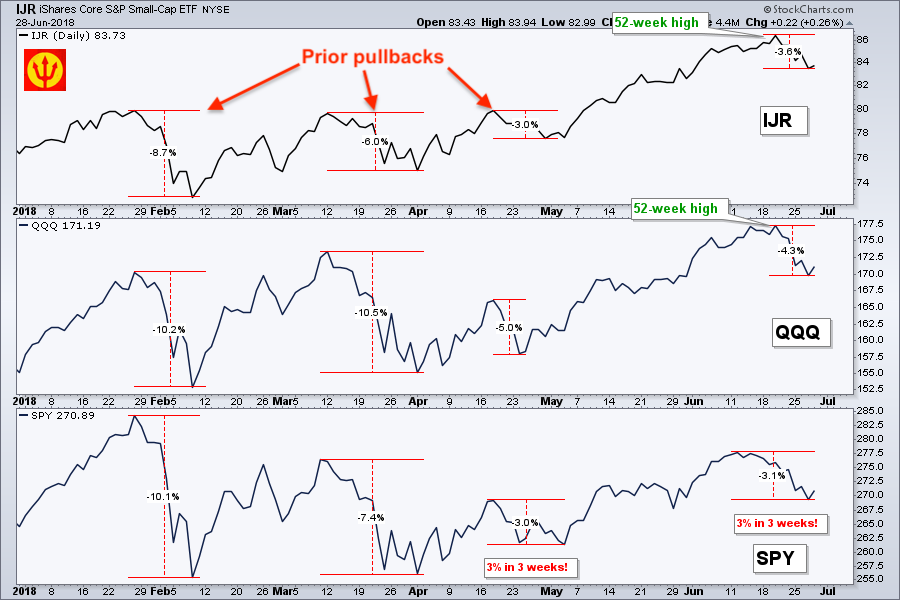 From the June high to this week's low, IJR fell 3.6%, QQQ fell 4.3% and SPY fell 3.1%. These declines are comparable to the April declines and much less than the declines in March. After hitting 52-week highs, IJR and QQQ are entitled to pullbacks and I will treat these as pullbacks within uptrends until the long-term evidence changes.

Just to make it easy, the final straw is when the 50-day EMA crosses below the 200-day EMA for the S&P 500. Right here, right now, the shorter moving average is well above the longer moving average.

It is family vacation time and I will be off the first two weeks of July. The next commentary will then be on Monday, July 16th. Happy 4th of July! 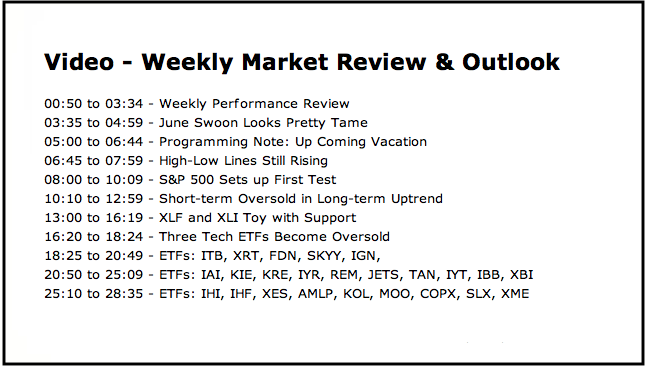 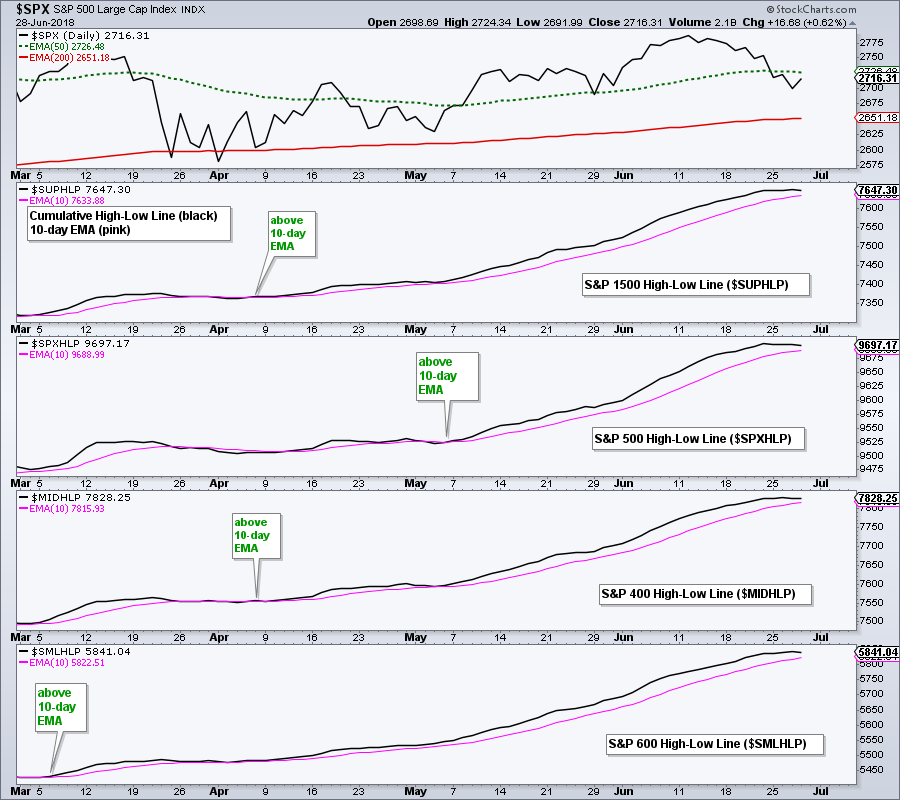 A four month chart and 10-day EMA may seem short-term, but this is really a medium-term indicator. High-Low Lines move pretty slow so a short moving average is all that is needed. I would not become concerned with the current pullback until three of these four lines cross below their 10-day EMAs.

The AD Lines for the major stock indexes hit new highs in June and pulled back the last few weeks. The new highs are bullish and suggest that the long-term trend is up (for breadth at least). A pullback after a new high is pretty normal at this stage. The red arrow-lines show prior pullbacks in February and March. 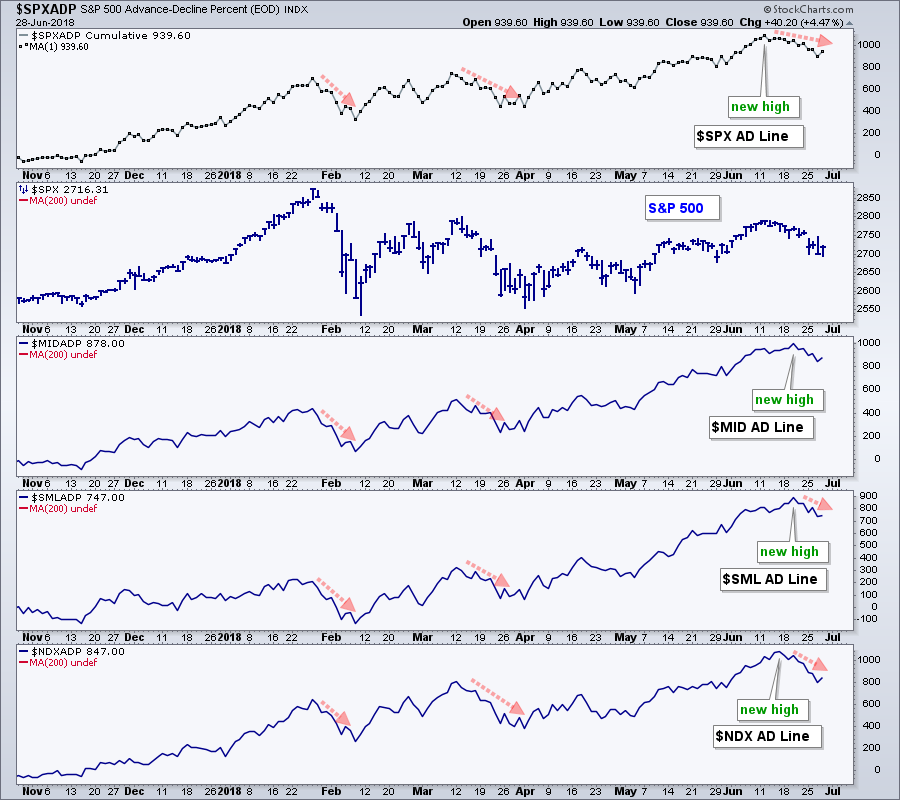 The S&P 500 moved sharply lower on Monday and then chopped around the next three days. Despite a gap down on Monday and 3% decline in two weeks, the big picture remains unchanged. The index broke out of a big triangle in May and the breakout zone turns first support in the 2675-2725 area. With recent weakness, the index is testing this breakout zone. A close below 2675 is the first level to watch for a breakout failure. Long-term, the lows from late April and early May mark key support in the 2600-2625 area. 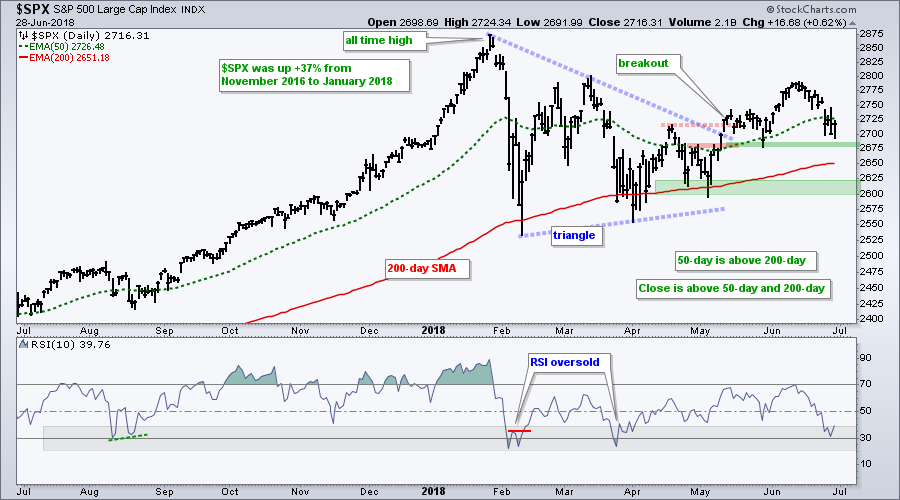 The indicator window shows 10-day RSI almost dipping below 30 this week. Overall, RSI shows just how difficult 2018 has been for the S&P 500. Note that the indicator dipped below 30 just once in 2017 and exceeded 70 at least ten times. Moves above 70 show strong momentum and usually occur in uptrends. In contrast, RSI dipped below 30 three times already in 2018 and exceeded 70 just once.

It's time to play "Would you have the Nerve" because 5-day RSI became oversold for SPY, QQQ, MDY and IJR. These are my big four in my mean-reversion system, which is explained in detail in this System Trader article (click here). Here are the buy conditions:

This system only trades in a bull market. Note that I changed from a 5-day EMA to a 50-day EMA because this reduced the drawdowns. The ETF becomes oversold when RSI moves below 30 and a buy signal triggers on a move back above 30. The buy signal usually triggers when price is below the Chandelier Exit. Thus, a sell setup is not possible until prices move above the Chandelier Exit. Make sure you study and understand how the indicators work. 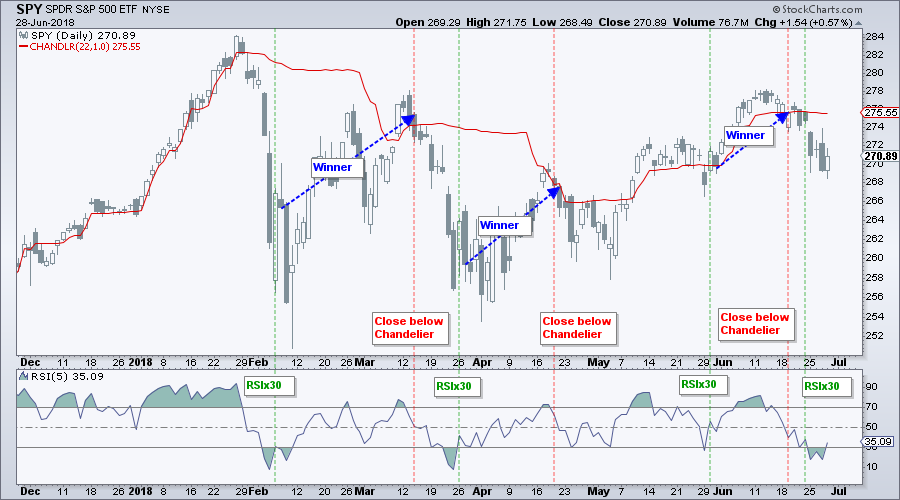 XLF and XLI Toy with Support

Price-wise, XLF peaked in late January and declined the last five months, hitting a six month low this week. The PPO dipped into negative territory for the second time in two months. Thus, the trend is clearly down here. 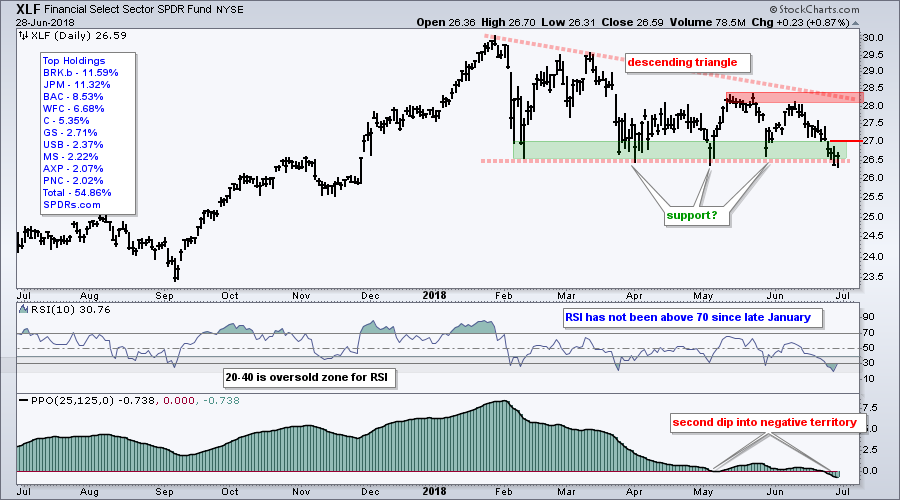 The February to May lows mark a possible support zone in the 26.5 area and the ETF is trying to hold this area. Look for a close above 27 as the first sign of a successful test. A break above 28.5 is needed to reverse the 2018 downtrend.

The next chart shows XLI with similar characteristics as it battles support in the 71 area. Look for a break above 73 for the first sign of a successful test. A break above the May-June highs is needed to reverse the 2018 downtrend. 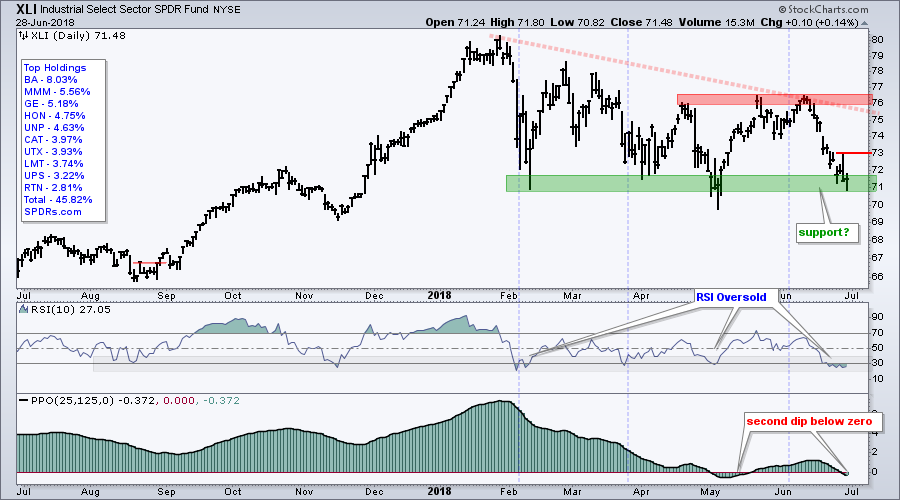 I think XLI and XLF hold the key to the S&P 500 right now. Both are holding the market back and the main reason the S&P 500 has been flat this year. Breakouts in these two laggards would be a big plus for the market. Until such breakouts, the S&P 500 is likely to meander and frustrate.

In contrast to XLI and XLF, the tech sector is till performing well and three related ETFs have mean-reversion setups working. RSI(10) dipped below 30 for the Cyber Security ETF (HACK), the Software iShares (IGV) and the Semiconductor iShares (SOXX) this week. All three are in uptrends because they recorded 52-week highs in June.

A dip below 30 in RSI indicates a pullback and a short-term mean-reversion opportunity. RSI is oversold after the pullback and a reversion back towards the mean is expected at some point. Timing, of course, is everything. You might consider analyzing the 2-3 week downtrend on an intraday chart and looking for an early breakout point. 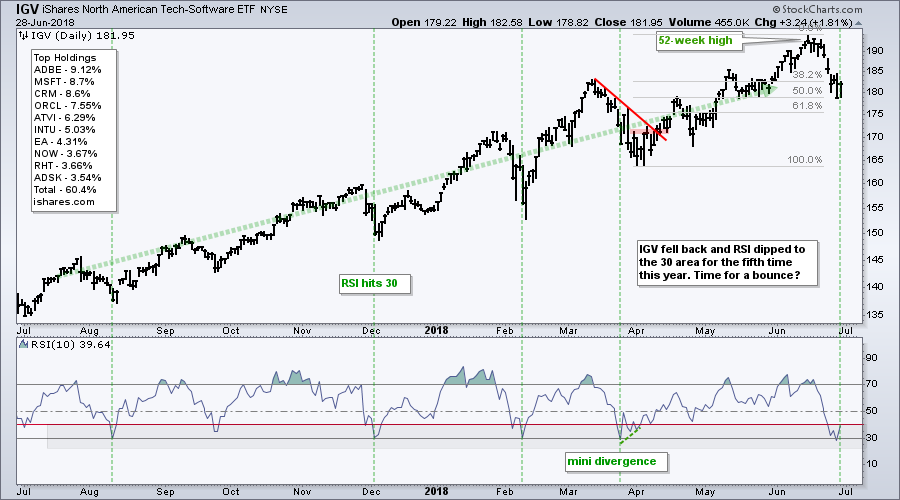 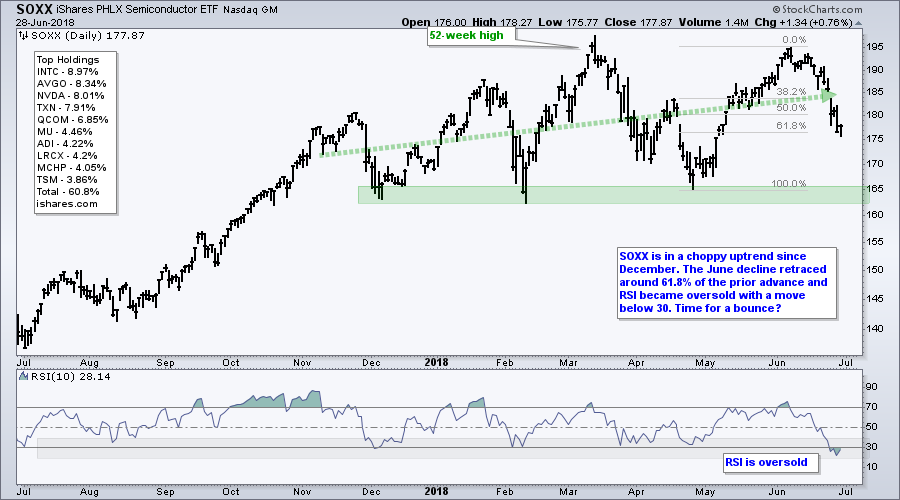 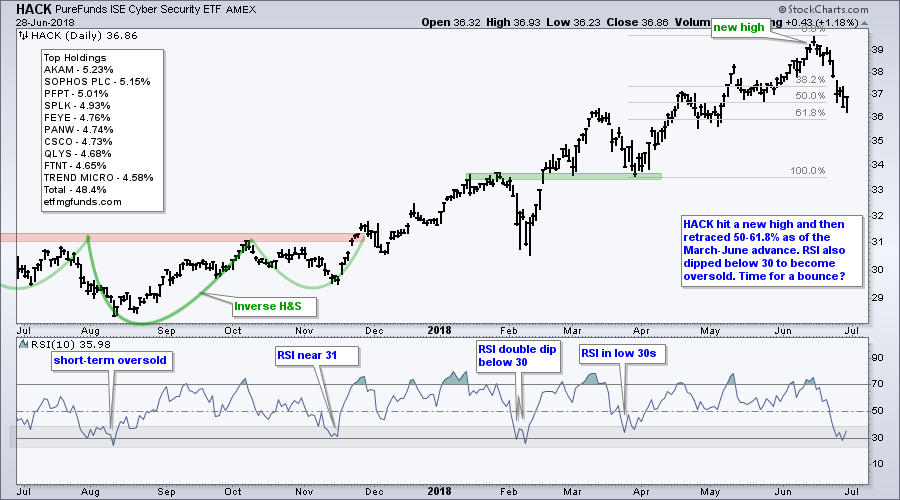 Note on RSI Settings: I typically use RSI(5) for the broad index ETFs and RSI(10) for stocks and other ETFs. The line shapes look pretty much the same, but the high-low range is often different. RSI(5) has a wider high-low range than RSI(10) and this means it will cross 70/30 more often. One is not better than the other, it is just a person preference. Study both and see what works best for you.