The first chart captures the long-term trend with weekly bars over the last five years. There is a five year uptrend with pullbacks, consolidations and a covid crash along the way. The blue zone shows a series of higher highs and higher lows since April. Price is above the rising 40-week SMA and the long-term trend is clearly up. This means we want to look for bullish setups on the shorter timeframe.

The next chart shows candlesticks over the last five months for short-term analysis. A bullish setup is present and we are seeing a short-term momentum pop. First, XLV hit a new high and then corrected by retracing 38 to 50 percent of the prior advance (late Oct to late Jan). This surge-retracement denotes a two steps forward and one step backward sequence. The decline also formed a falling channel (blue trendlines).  Both the channel and the retracement amount are typical for corrections within a bigger uptrend. A channel breakout would signal an end to the correction and a resumption of the bigger uptrend. 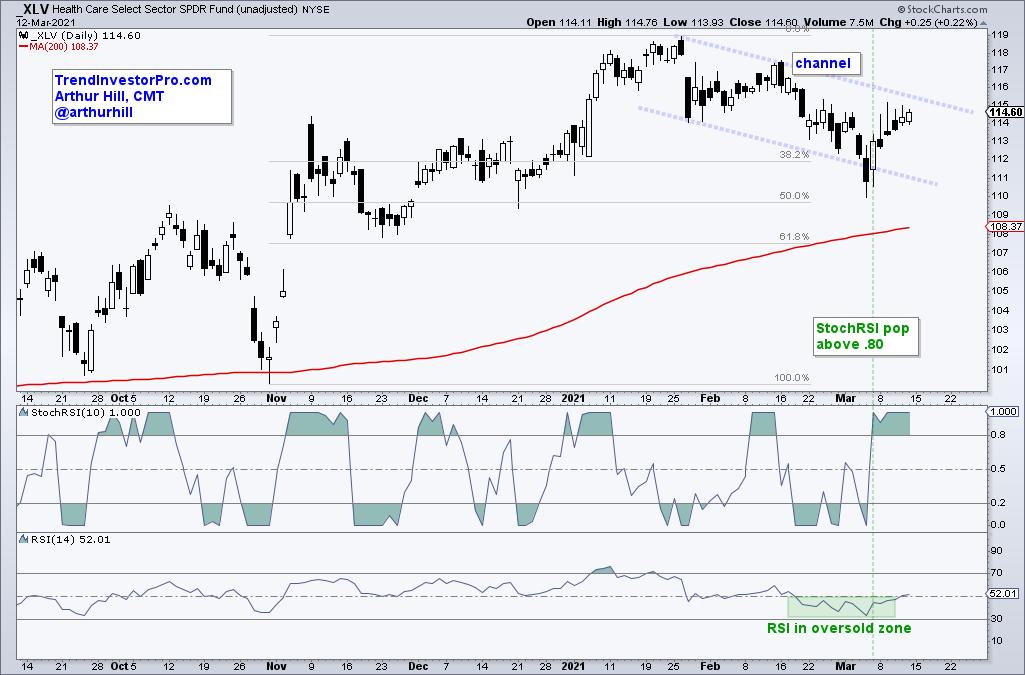 The indicator windows show RSI(14) to identify short-term oversold conditions and StochRSI(10) to identify a short-term momentum pop. First, RSI becomes oversold when it moves into the 30-50 zone (green shading). Once this condition is met, traders can then look for StochRSI to pop above .80 for early signs of a breakout. This setup occurred in late October, mid February and early March. This combination does not work all the time, but it can help alert traders to a potential breakout on the price chart.

This week at TrendInvestorPro we unveiled the Composite Breadth Model to identify bull and bear markets. This rules-based model tells us when to embrace risk and when to raise cash. We also identified a number of international ETFs with bullish setups in our weekend video. Click here to subscribe for immediate access.