Today the blog is puzzled.

Overbought indicators are rolling over... Telling me to get out of Dodge.

Price action....telling me to get out of Dodge. Actual price change, saying things are ok.

Since the 19th, Flat, Flat, Up on a Monday, Down on AAPL Day, Up on Fed day, Down on CAT day, flat to finish the week out. 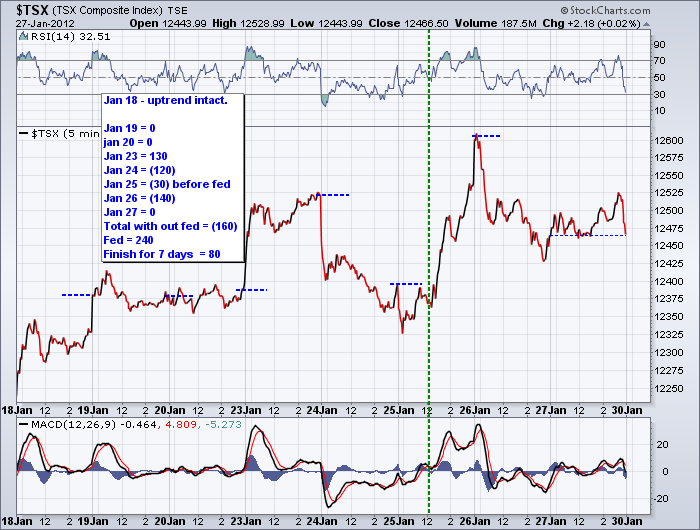 We did test above the October highs this week, but we closed lower than the weekly closing highs of October. The market topped October 27th after the October 4th breakout. Here we are 3 months later (Jan 27th) and we are back to where we started. The Dow, tested new highs this week from May 2011 and failed. The Nasdaq 100 has made and held new highs. The SPX is stuck at resistance as noted in the blog titled looking for trouble. If the Fed hadn't reported and pushed the $TSX up 240, it would have been a down week. We would have closed below last week. The Fed announced early that they were planning on holding interest rates low into 2014. 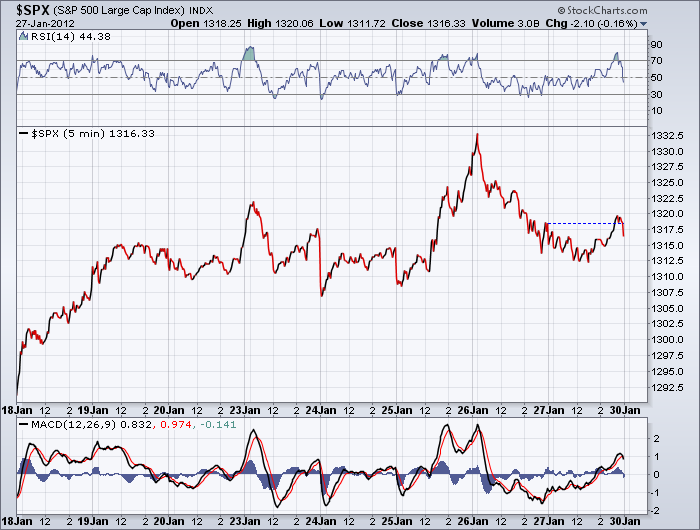 Check out that intraday path of the SPX. Guess where the Fed Announcement was.

I guess the Fed felt one year wasn't enough data. The Fed Q and A led the inflation bulls to their lear jets and they all jumped on the golden jet higher. However Bond yields fell which isn't good. Not only did they fall, they fell almost 10 % from Tuesday to Friday. Bond Yields are moving around 10% a week.....so much for stability. Want to trade 3x leveraged ETF's intraday...trade bonds! 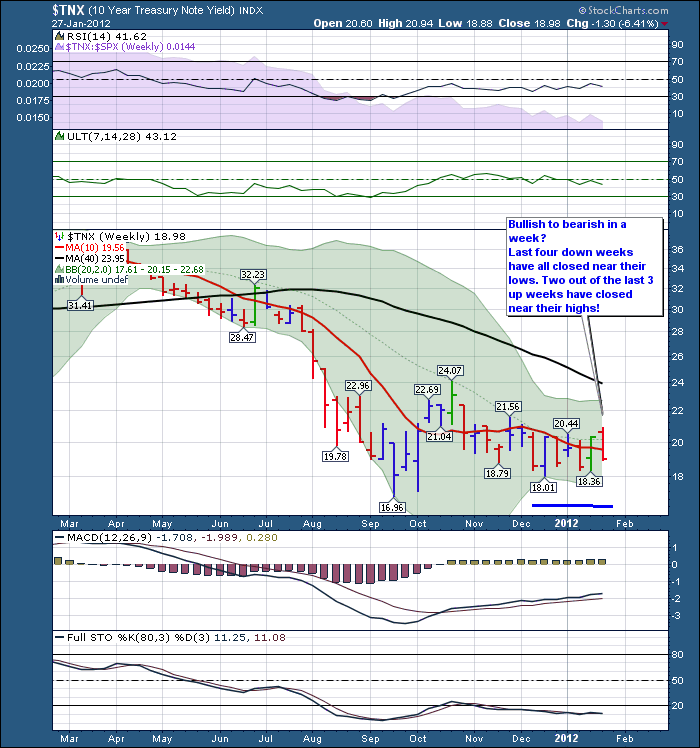 Oil didn't change by the time the week closed out. It made new 5 week lows, then rebounded to slightly higher than the midpoint for the week and up from last week.The Energy stocks were treated better. 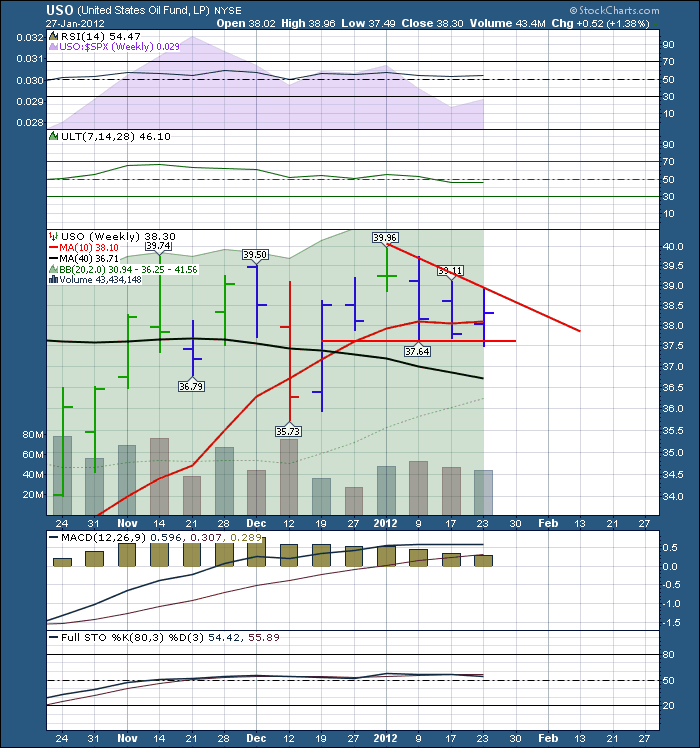 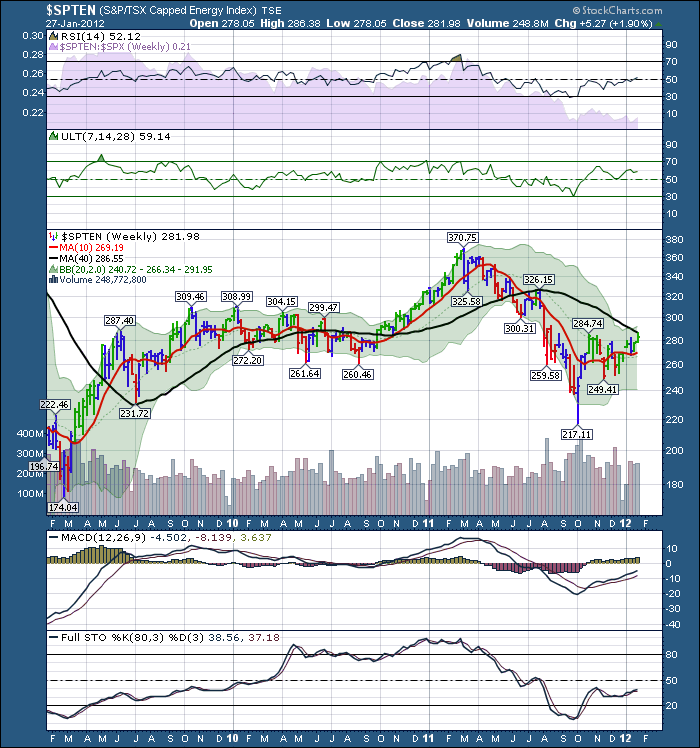 Copper moved up a little on Wednesday, had a great day Thursday and closed out the week near Thursdays level. So Copper had an up move. FCX put in two ugly candles after the Wednesday boost. Both days opened near the lows, tested higher and closed near the lows. That is not follow through! 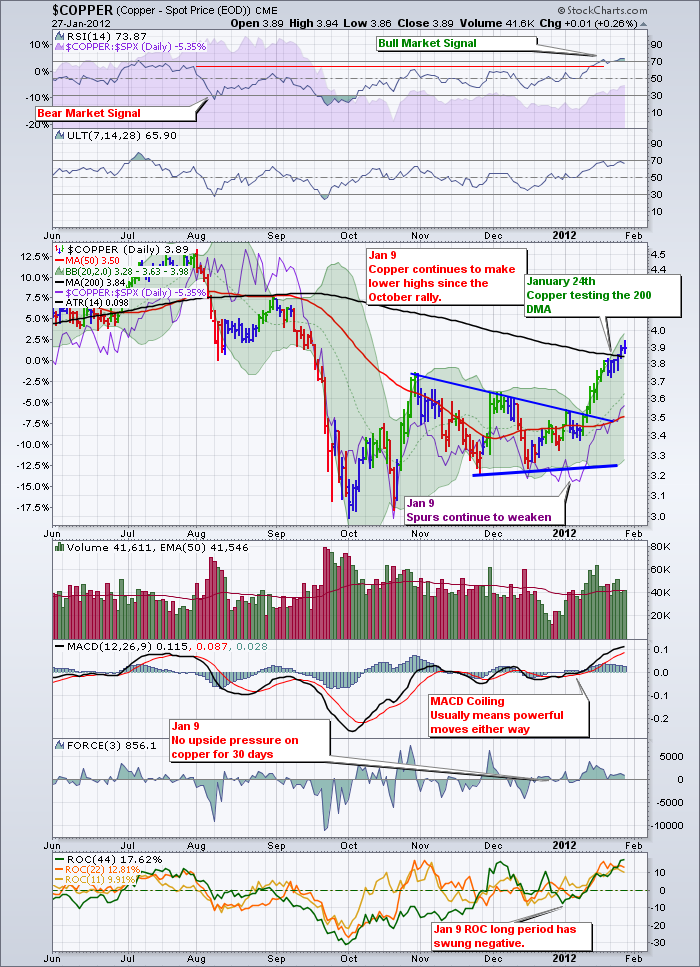 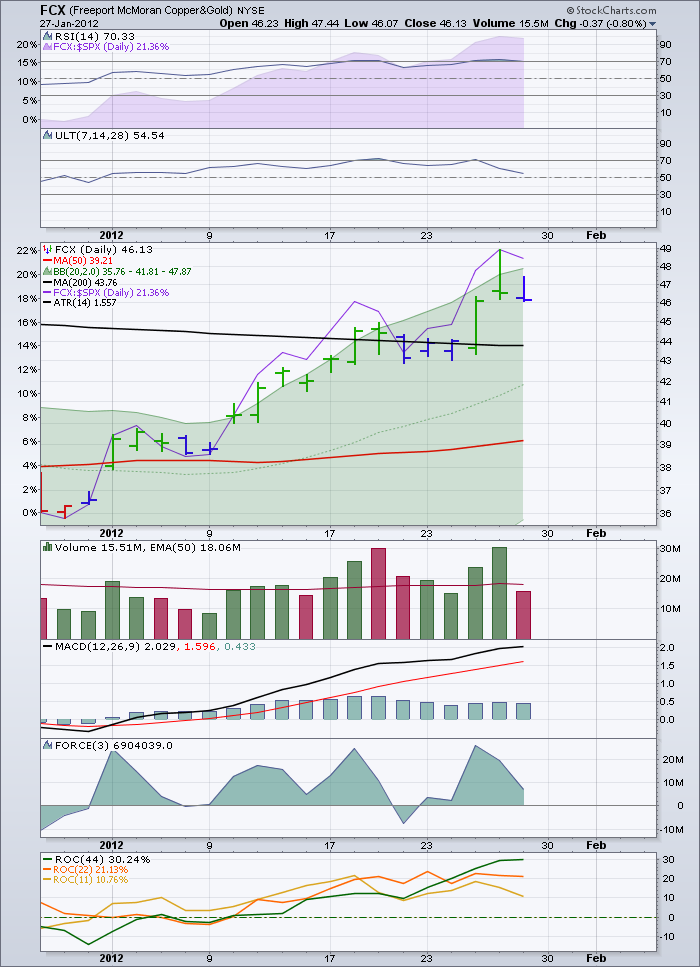 So, here we sit. Fed, fat and happy, but stocks couldn't rise on their own. The Greeks are are having My Big Fat Bond Meeting, Portugal set sail for bond forgiveness island, the rest of Europe's bond tension improved. Meanwhile, Japan's total debt achieved quadrillion Yen status. The Hang Seng gapped up after the Fed meeting to sit slightly above the 200 dma; and there it sat for the next 2 days. No change. But at least it closed above the 200 dma.

The markets are really trying to figure out if they can rally from here. So far, Gold can. The Banking index is riding on the 200 dma literally. Check out the US banks at $BKX. While the TSX was 80 points higher, our Canadian Bank stocks left the North side of the 200 dma and plummeted. The Energy stocks had a good week, gapping up on Monday. But they bounced down from the 200 dma. Seems for every positive there is a bear position. Maybe this is sector rotation....live! Out of banks...into Gold. 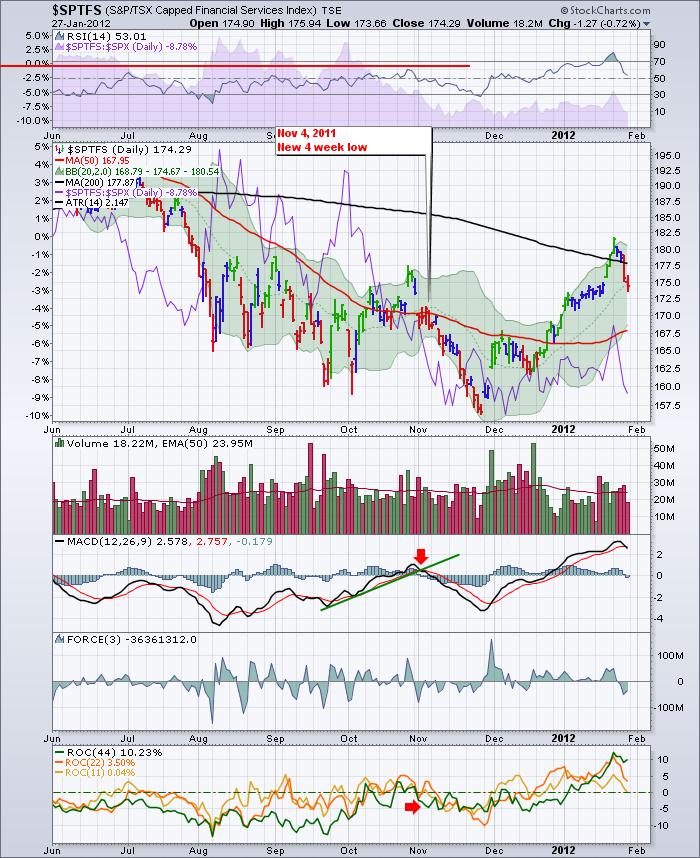 Here is GOld. Check it out. Green lines are lows. Grey lines are highs. 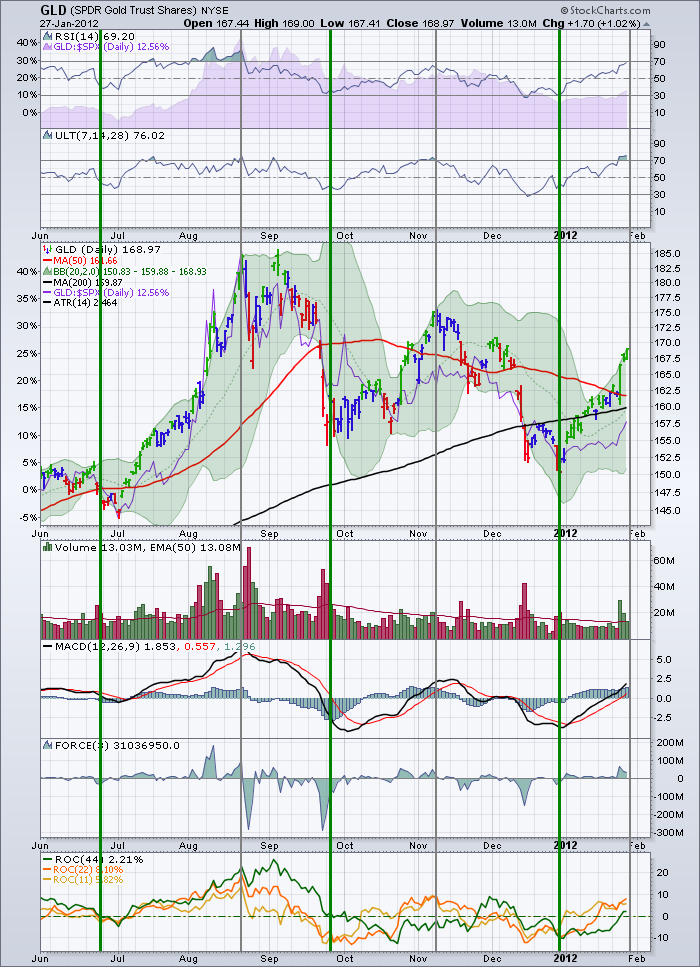 Well, who knows where to next. I am having some formatting issues trying to write the blog, so hopefully I'll get that worked out soon.

The Superbowl is SO next Week. Like Monday to Sunday! It should be a very important week. Does the market subscribe to inflation acceleration, or do we pull back now that earnings are done?

Have a great weekend. If you would like to subscribe to the blog, Select the blog tab, Click on The Canadian Technician - on the righthand side. Upon arrival, look up in the top corner and you can subscribe.

March 17th, Ed Carlson will do a one day seminar in Calgary for Setting up George Lindsay systems for your own use. He wrote the Investment Book of 2011.

Remarkable Speakers coming live to the CSTA. Your trading account will appreciate it!

See the www.csta.org website for full details and signup. Non members are welcome.