Whether it was Oil, Gold, or base metals that caught the eye of traders, it created some activity. The trading on the $TSX was big last month. I have put a volume chart at the bottom of the chart below, with a horizontal line at the volume for the end of February. The only other up close month with volume this high was the 2009 March lows. All of the other high volume months had a lower close than the previous month, making them a red volume candle when the volume was this high. 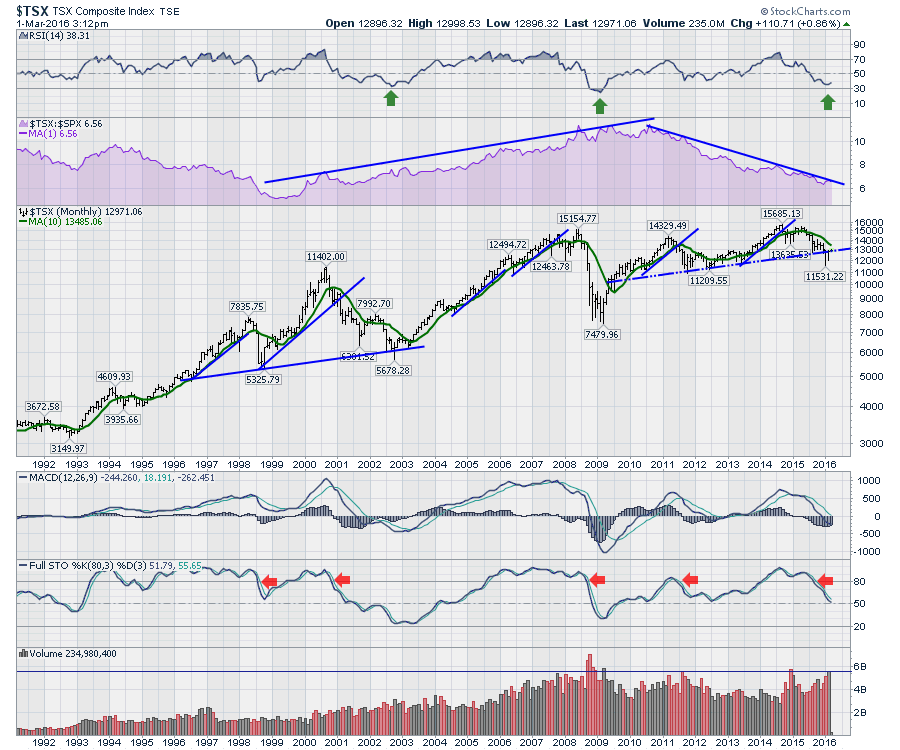 Almost all of the indicators here are at important monthly low levels. If there was a time for the markets to rally strongly, this would be it. The 13000 level has been a major friction point. A weekly close above the 13000 level would be important technically. At this time, the New Highs-New Lows data are suggesting this is a bear market bounce. A big push up of more than 2% today on the NASDAQ is pretty bullish. The fact that the $TSX is up less than 1% on the usually bullish first-of-the-month trade is not as inspiring.

As Natural Gas closed at 17 year -monthly-closing-lows, this adds more pressure to the energy complex. Natural Gas was down 26% in the month of February. 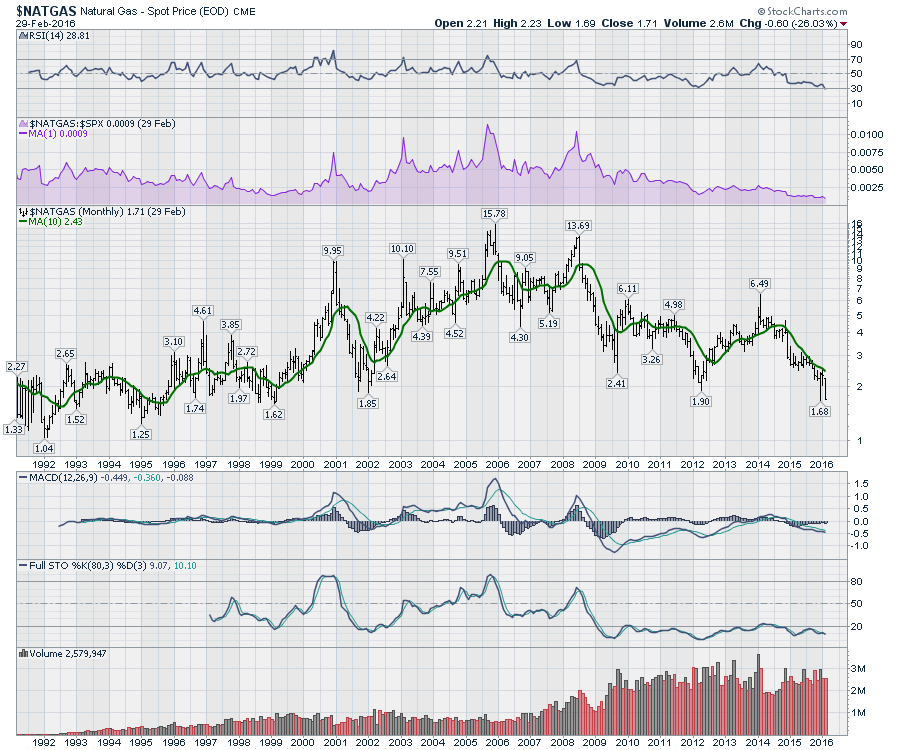 Oil closed up slightly on the month, but $0.16 on $33 is hardly a turn. It was a good hammer candle though after testing lower and bouncing all the way back up. The low so far is $26.05. 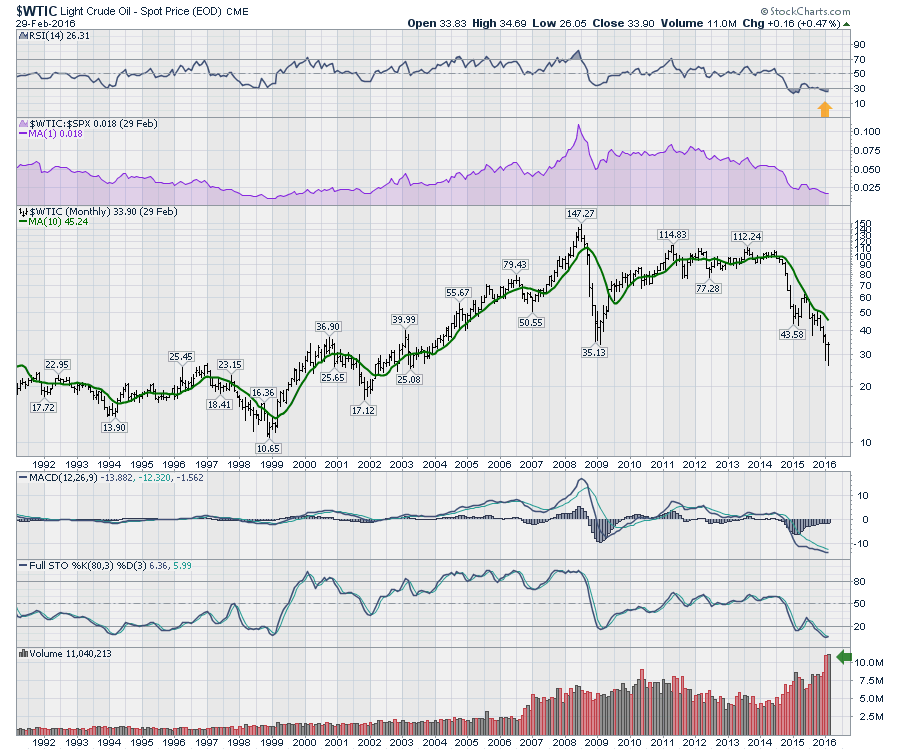 Here is $SILVER. Silver tried to breakout, but ended up closing the month pretty much on the 10-month MA line. 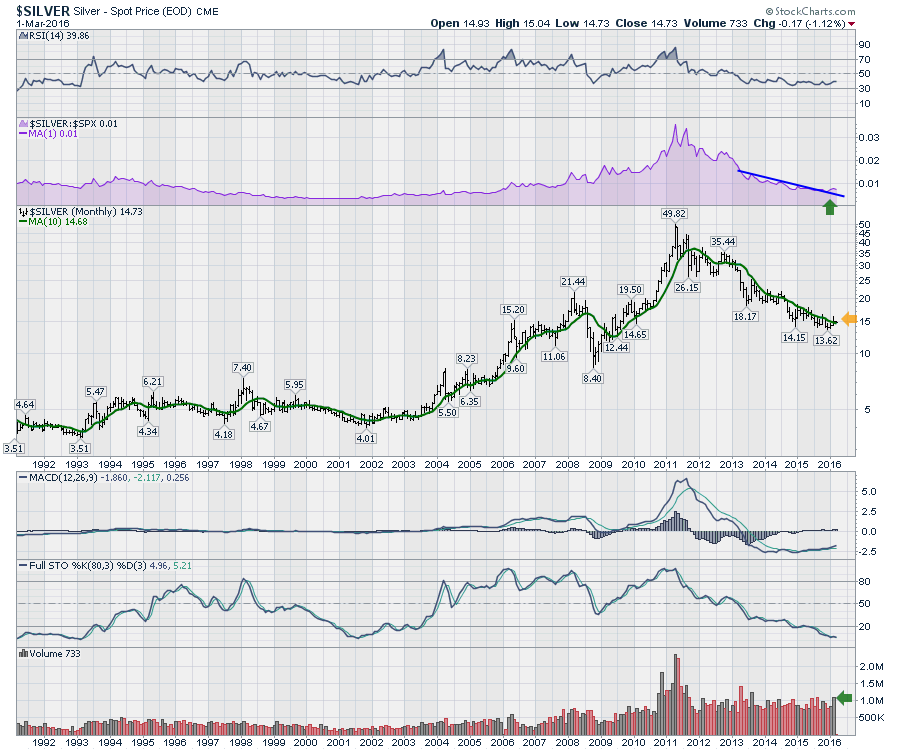 Lastly, $GOLD was the big story of the month. The RSI was at 3-year highs for a closing level. Gold outperformed almost everything since the beginning of the year. The price action soared as $GOLD locked in new 52-week highs. The MACD shows a nice big positive histogram which is the biggest since Gold made its final run back in 2011. 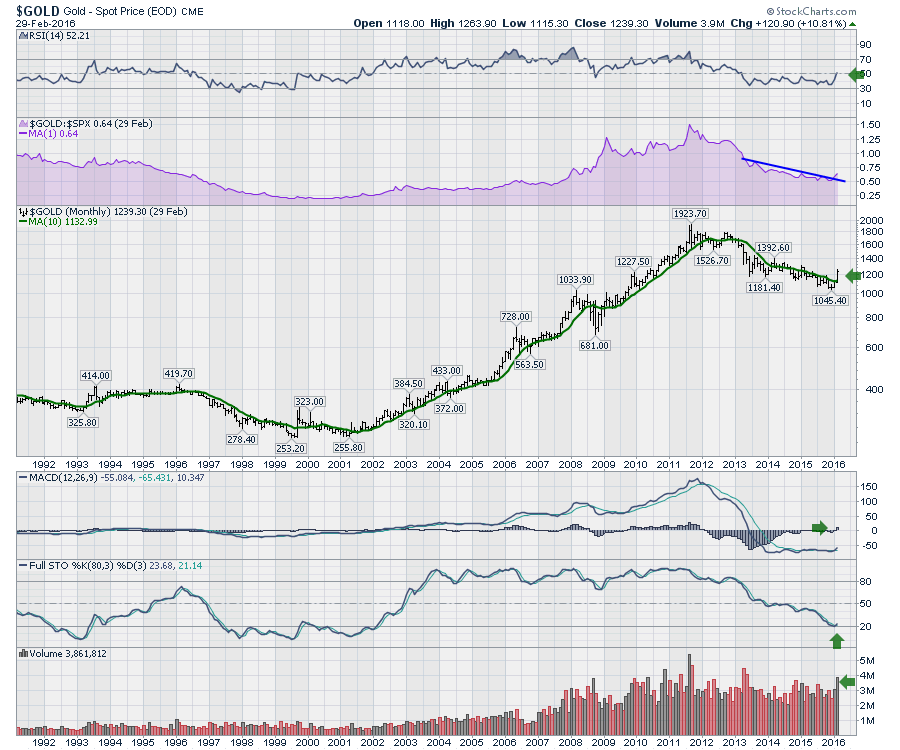 With the largest positive monthly volume candle since the top of Gold's run, it has been a big month. While all good moves need time to breathe, this one has a lot of attention with almost all funds not holding positions in it. Any further moves will undoubtedly bring on more investor appetite.

In review, the $TSX had a great month. The chart of gold is very bullish. The chart of Natural Gas is very bearish, almost to a capitulation level, as the plunge of 26% was huge. Oil continues to hunt for a bottom. At the very least, the world governments are starting to meet to try and establish a production ceiling. Expecting some of the most unpredictable country leaders to generate a lasting agreement is hard to invest in. As we approach the driving season in May, we could finally expect some rally. Based on inventory levels, refinery shutdowns and continued expansion in production by Russia and others, it's hard to imagine the rally could be anything more than a trading rally at this point. The $25 level was a major support resistance area in the $WTIC chart back throughout the 1990's and into 2003. Perhaps that can be our level to trade against. As the job losses keep mounting, it will continue to place major deficits in the Canadian Government coffers while impacting other parts of the Canadian economy such as trucking and manufacturing.

I think the area of focus for traders looking for upside is going to be in the commodity space. At least one chart finally turned bullish. We'll be talking about more bullish ideas on Thursday in the Commodity Countdown 20160303 webinar. Click on the link to register.