As we cross the halfway mark, it is always good to do a little reflection. The tables shown below are based on Year-to-date information.

While equity markets around the world were up in the first half of 2021, commodity-related trades were some of the big winners. The market for commodities is still having streaks of brilliance, but the downturn in industrial metals thru May and June has left that area a little more subdued.

The run in crude oil sparked a massive move in the exploration companies. It is just as important to remember to trade commodity-related names rather than buy and hold. Commodities are cyclical and swing in wide ranges that can be profitable, but the exit is more important than the entry. 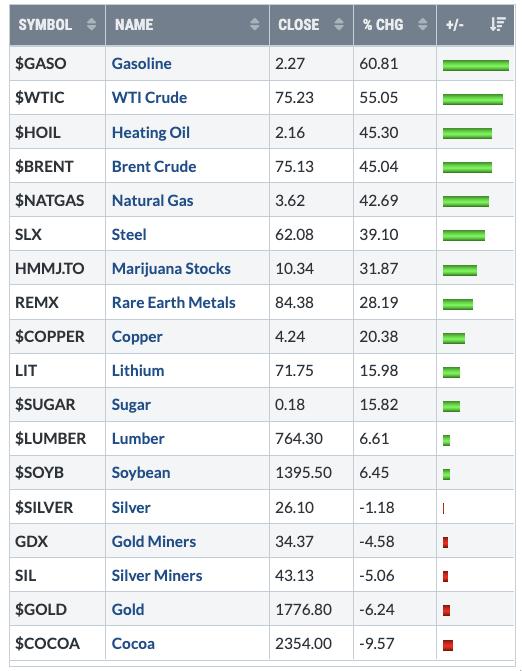 Looking at the industrial metals like steel and copper, as well as rare earths and lithium, it has been a decent first half. The crops like Corn, Soybean (shown above) and wheat have been on a roll too, but recently pulled back making their move seem modest.The real oddity is Gold and Silver, which have not been able to get out of the doldrums after a nice run in 2020.

Looking around the world, the indexes are positive. For Canada to marginally outperform the SPX is a new one, but the supportive moves in oil, materials and financials have edged out a gain over the USA for the first time in many years. We'll see if it can hold up for a full 1-year time frame. Surprisingly, the Shanghai was the weakest of the big markets. Australia underperformed other commodity countries like Russia and Canada, but it clearly outpaced Brazil. Europe was a mixed bag, with performance spread out across the list. In general, Asia ranked at the bottom. 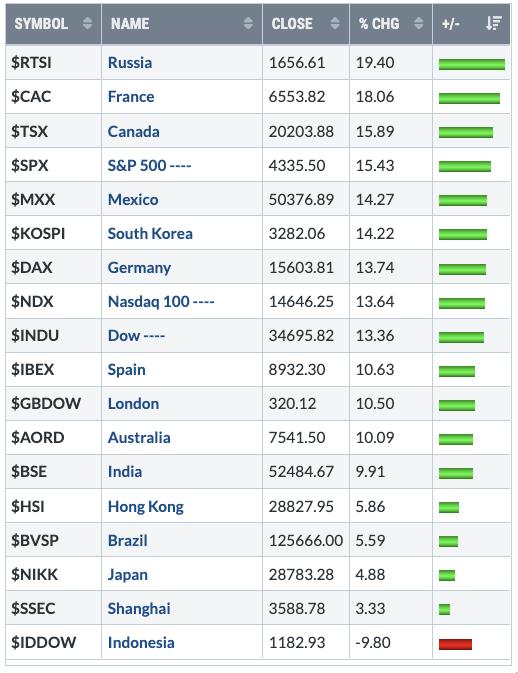 When we dig deeper into what worked within America, it was a complete reversal from 2020. XOP has been one of the lowest SCTR-ranked areas of the market for 2 years. Retail came back with a vengeance as the malls opened up. Financials had a big rally on widening spreads. The shortage of semiconductors has hurt that area, but names like NVDA have ignored the issue! XLY is one of the lowest performers, but Amazon, the big dog in the room, has gone nowhere. The defensives like Healthcare, Staples and Utilities are lagging as they typically do in big market runs. Industrials and materials have been doing all right, but nothing really shocking, just inline with the SPX. The move in Real Estate has been a big surprise to me, but obviously some buyers found big wins there. 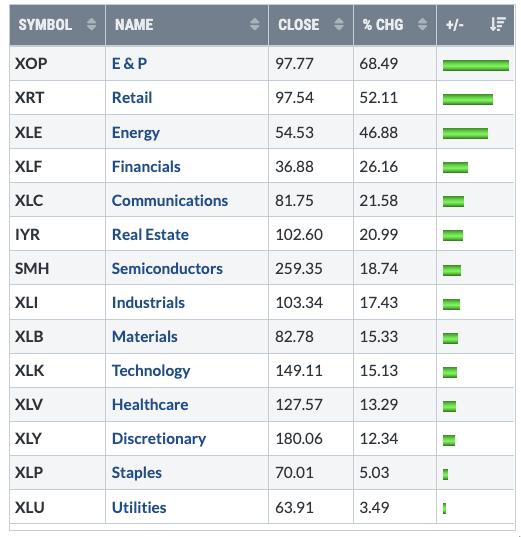 All in all, a very positive first half of the year. As we head into earnings, I expect more of the same. One week at a time, but the world is reopening. Canada is just starting to reopen, as an example. Sometimes it can be hard to get the news flow from other locations, but, while the US has been open for a while, the rest of the world is ramping up vaccinations and trying to restart their economies. This continued improving backdrop should give us some tailwinds.