At Osprey Strategic, we have been focusing on the energy crisis that has already arrived for much of the world. I'll cover five planet-saving stocks here but we need to add some barbell context.

Saving the planet has been a theme for investing since Queen Elizabeth was dealing with smog in London back in the 1950s. As 1000 private jet planes converged on Davos this week, they met to discuss how to force the lower class of people to behave better. From the 1950s to today, the buzz to urgently save the planet never gets old. Fossil fuel spent for politics is worthy. Home heating, cooking, agriculture, and lower-class transportation—unworthy. 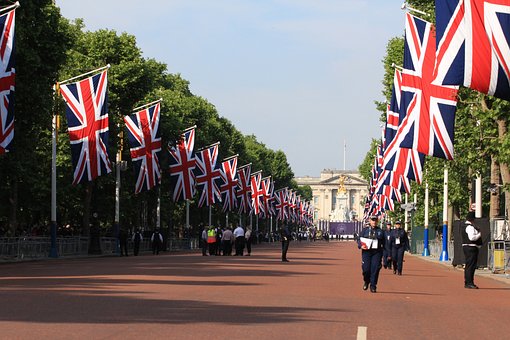 As North America gets drawn into the reality that "cancel culture" is closing existing sources of energy for the masses before the replacements are built, the energy trade looks set to resume the upward move.

Uranium, copper, crude oil, gasoline, and diesel (heating oil) all had an up week, while the $SPX closed lower. It is this relative strength that we like to pay attention to as we want to outperform the S&P 500 index ($SPX). I have specific ChartLists for fossil fuels, and a list to trade the energy crisis outside of fossil fuels. Both had a strong week.

Elon Musk hinted at nuclear power, but until the fossils of Davos get their heads around more nuclear power, we're probably going to be using wind, solar, and tidal. For renewable energy, we need a method to store the power and allow people to 'download' the electricity into their application. 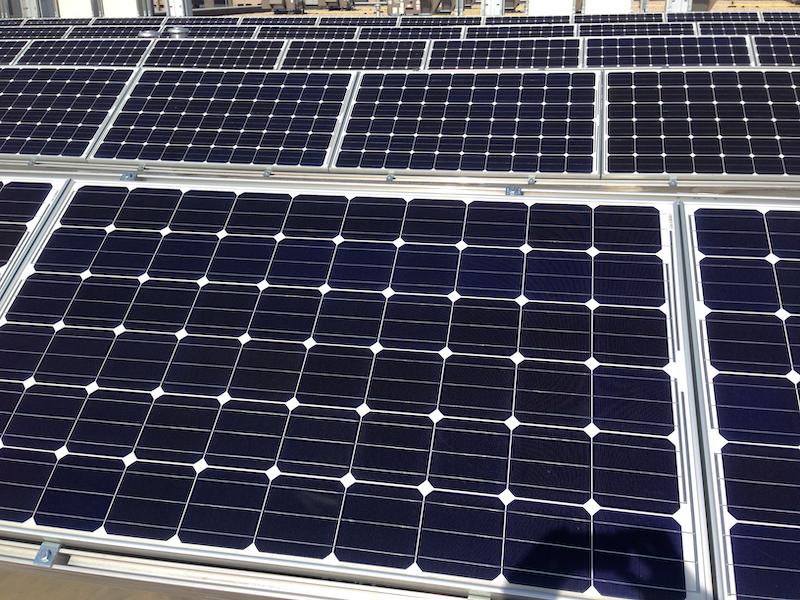 As an example, Tesla's new semi truck needs a 1 Megawatt charge, equal to a 15-acre solar field daily. If 10 trucks use the power from a 1/4 section of land, we need some method of storing that electricity for the download the following day. Batteries are a key theme in this discussion and Lithium is a key component.

A major component of these batteries is lithium and Elon said "refining Lithium is a license to print money".

With that in mind, lithium names seem to be setting up after a multi-month correction. The cleanliness of mining lithium isn't part of this article, so don't shoot the messenger. We are here to talk stocks! Let's roll through 5 stocks to save the planet and warm the hearts of Davos.

Albemarle has been a go-to name in Lithium, and the stock is starting to turn up from the recent downtrend. The StockCharts Technical Rank (SCTR) is moving back above 50. Relative strength (in purple) has started to improve in 2023. The stock closed back above the 200-day moving average again. The percentage price oscillator (PPO) is still in a weak place, but is improving. 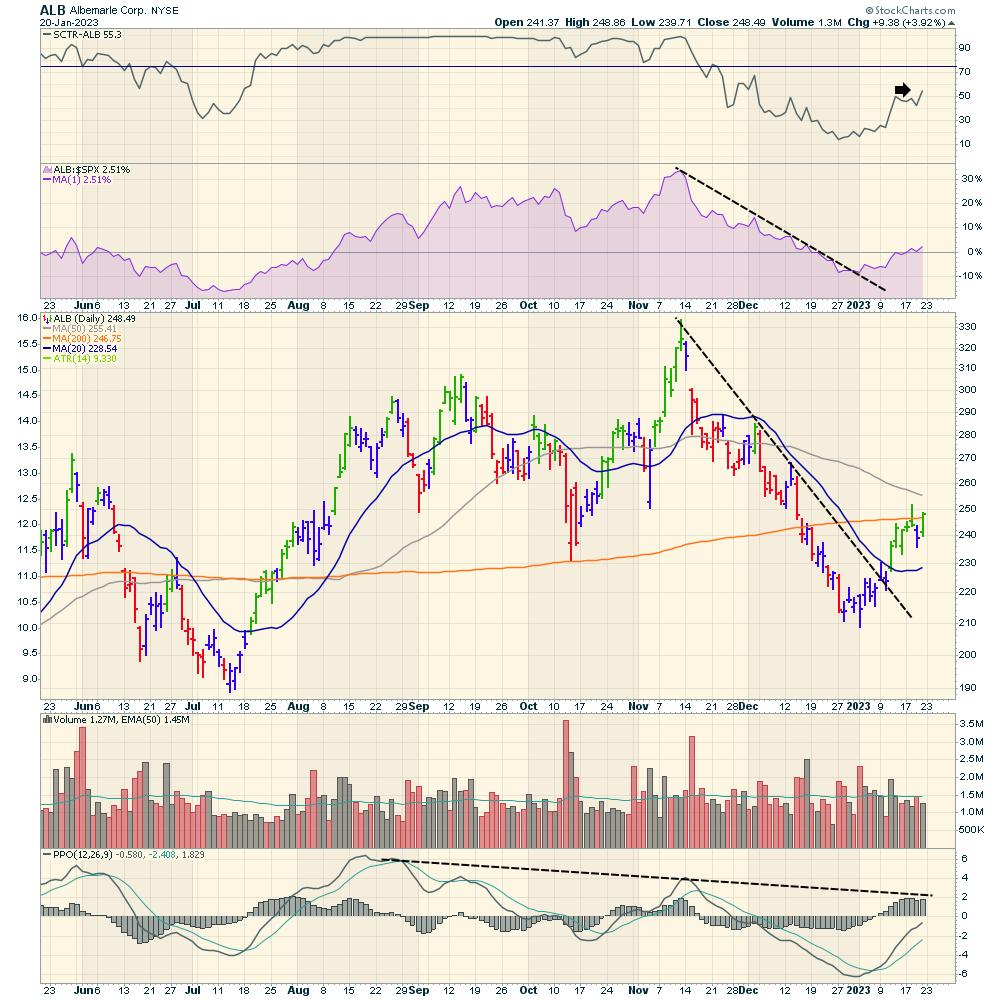 SQM has oscillated back and forth for the last six months, frustrating the buy-and-hold crowd. The difference this time is the overall market is trying to thrust higher, and this can support these energy-related growth stocks. The stock broke the downtrend and looks set to start moving higher. A continued move higher here would be at least a trade to get back to the top of the range, if not further. 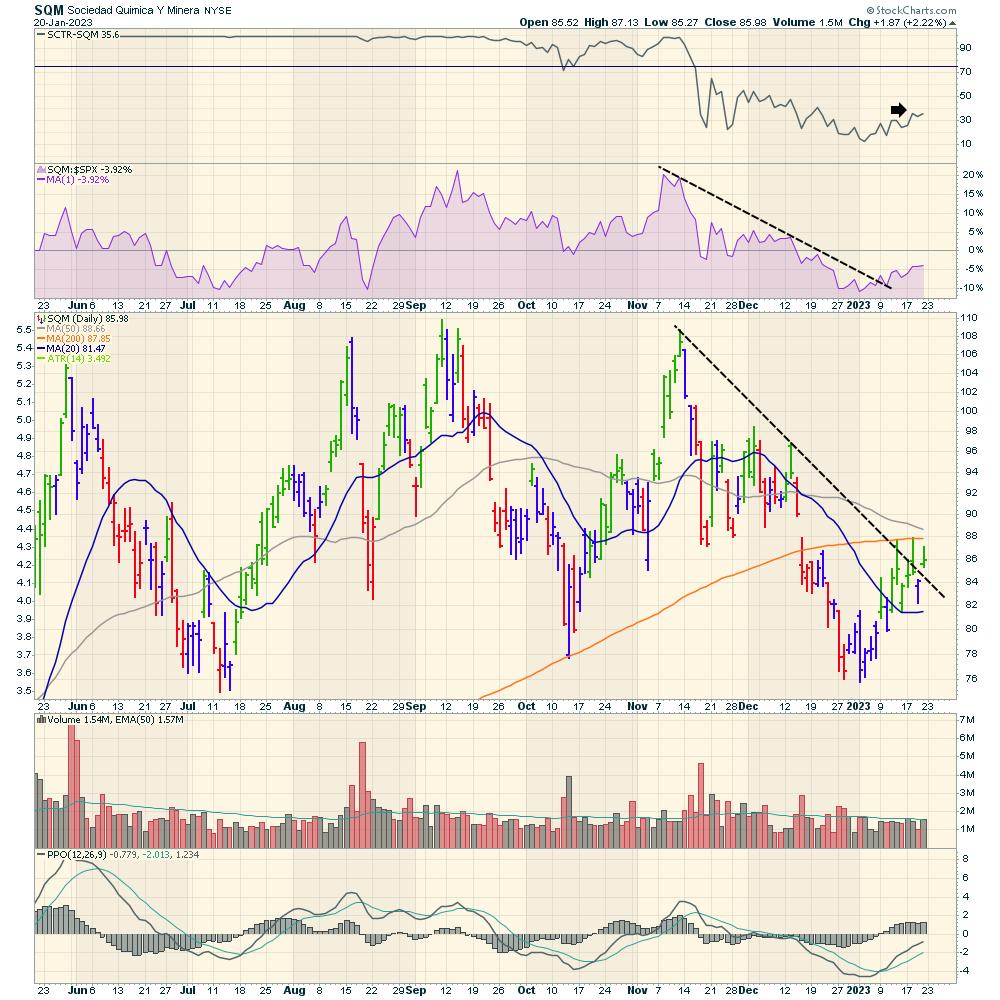 Lithium Americas looks like the base is in and perhaps it can break out above the down-sloping trend line. This is a dual listing in Canada and the U.S., and this is the American version of the listing (LAC in both countries). Note that the PPO trend is breaking as well as the relative strength trend in purple. 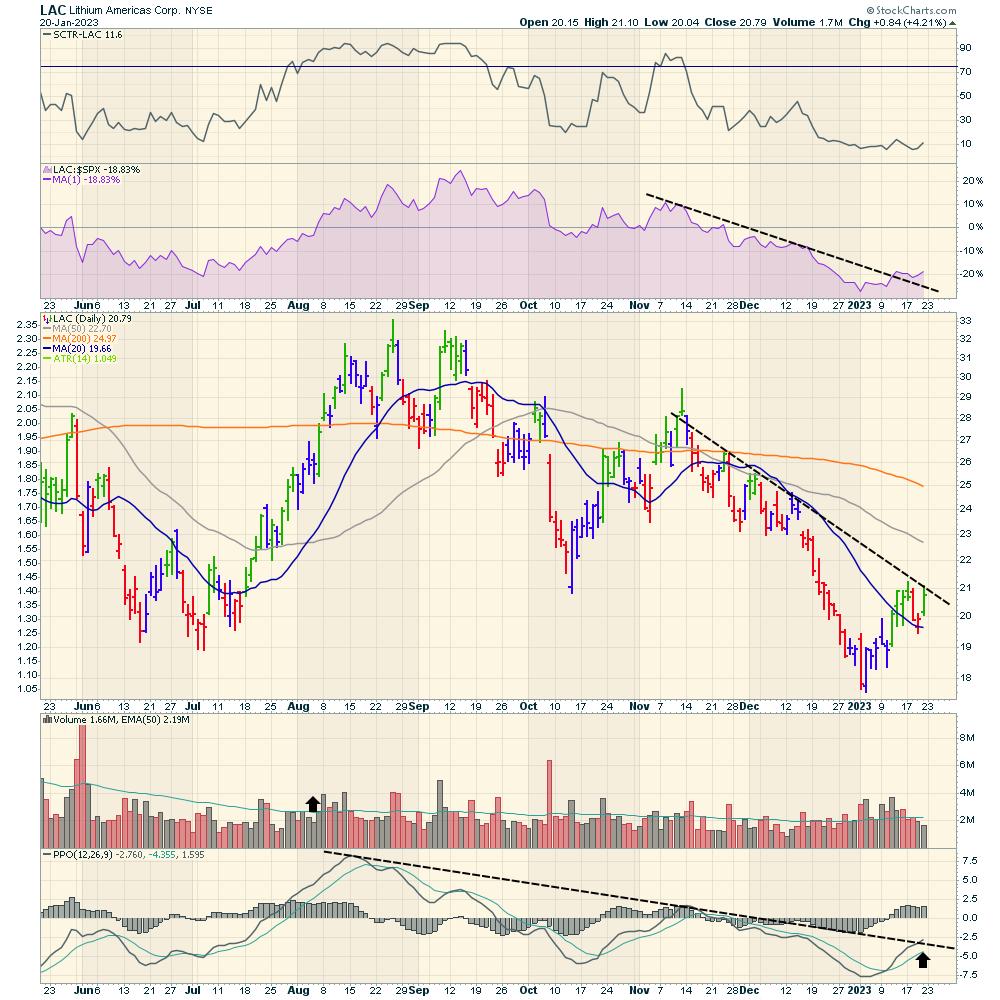 Piedmont already has an SCTR pushing above 75, making it more interesting. I like trading commodity-related trades near the lows as they break out, but this one also looks to be setting up to break out to new highs. The PPO downtrend is broken. I placed the trend line on price at the highest closes on the chart along that trend line. Friday gives a glimpse of the stock breaking out. 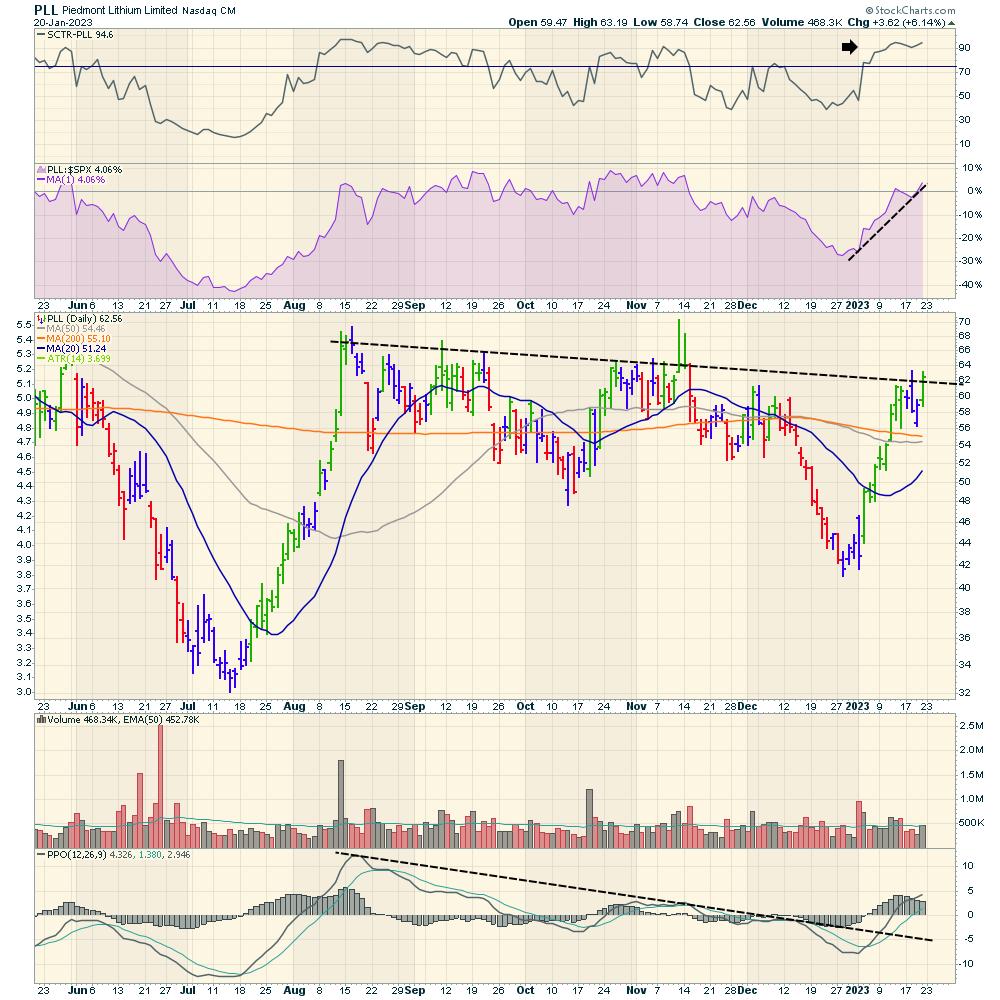 Sigma has an SCTR ranking pinned to the top after the huge thrust on the left side of the chart. With a wide ranging consolidation over the last three months, the stock is trying to break out from the consolidation range. It would not take much to break the relative strength downtrend. Volume is trending lower for the last few weeks, so that is curious. 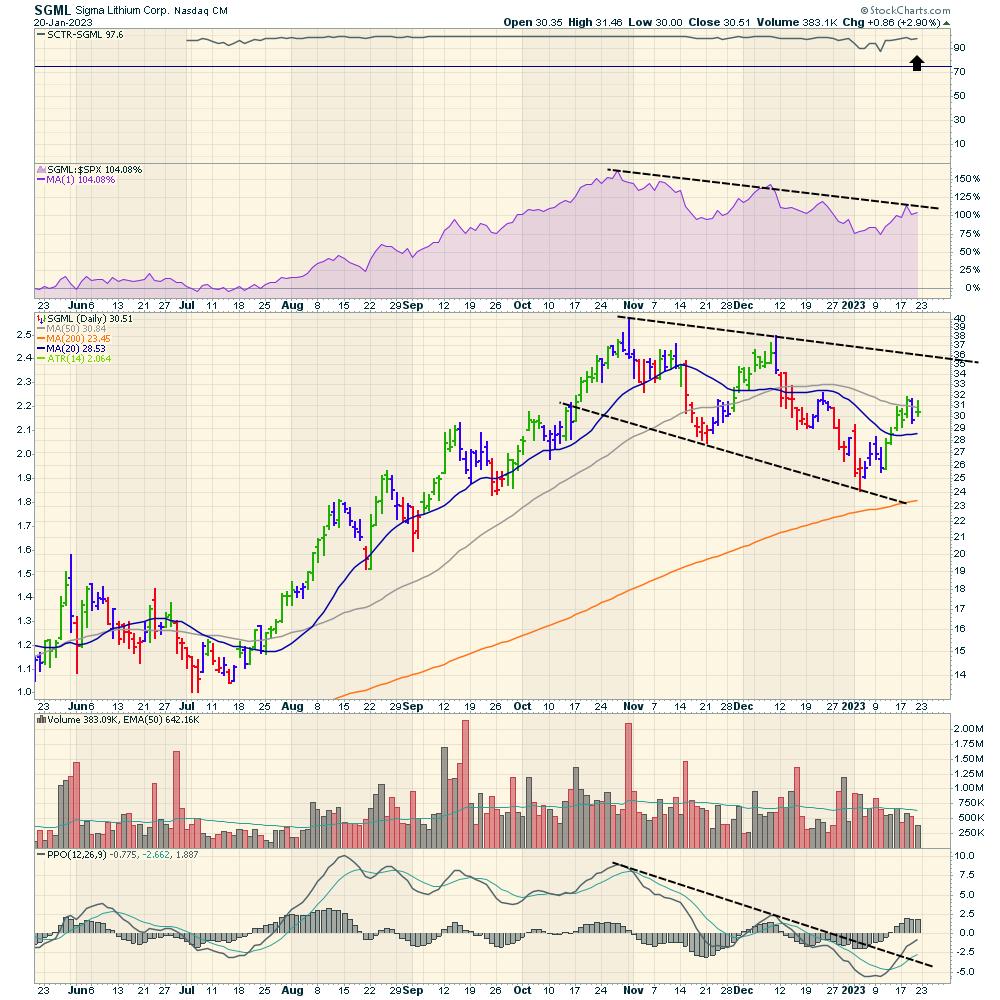 There we have it. Five stocks to save the planet and play the renewable energy trade while all those jets from Davos get home safely! Pardon my Canadian sarcasm!

If you would like more information on what we do at Osprey Strategic, this link provides an overview of how we review the market. Check to see if it is a fit to help you keep more profits in 2023! We have plans starting from $7 for the first month and those are available on OspreyStrategic.org.

Best wishes for a profitable 2023!

About the author: Greg Schnell, CMT, MFTA is Chief Technical Analyst at Osprey Strategic specializing in intermarket and commodities analysis. He is also the co-author of Stock Charts For Dummies (Wiley, 2018). Based in Calgary, Greg is a board member of the Canadian Society of Technical Analysts (CSTA) and the chairman of the CSTA Calgary chapter. He is an active member of both the CMT Association and the International Federation of Technical Analysts (IFTA). Learn More
Live Chartlist
Blog Archives
Previous Article
Next Article