The past two-month trading period is one at the present time considered a "correction"; however, there are nascent signs it may be something quite a bit larger than just your "garden variety" correction. First, we note that trendline resistance is proving its merit by turning prices lower, which up to this point during March has allowed prices to form an "outside reversal month" lower. Now, whether this collective pattern remains in force and the monthly close near its low will be determined next...but it is negative nonetheless at this point. 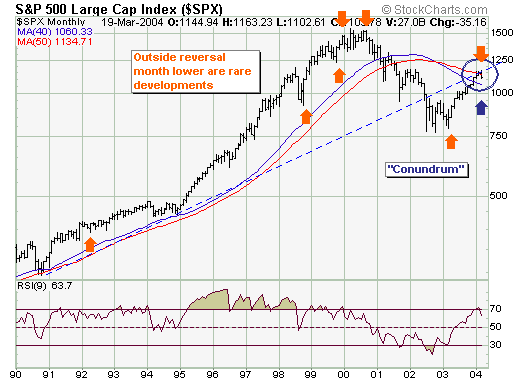 Secondly, and a bit more of a "conundrum" if you will - is the current price level relative to the location of the both the 40-month and 50-month moving averages...it is in between.

What to do? Our strategy will be simple - we will respect the correction to 1060; but at that point make a determination as to the strength of the rally off that low. If strong - we become aggressive buyers until otherwise noted; if weak...then we aggressive sellers upon its completion. Outside of this - the ancillary technical evidence suggests the probability of the latter is greater...but we must remain objective.