CPI AND PPI NUMBERS SURPRISE ECONOMISTS... The most frequently seen words in the financial press are "economists were surprised". It seems they're always being surprised by something. This week it was the "surprising" jump in the CPI and PPI inflation numbers. The fact that economists were surprised is a story in itself. It shows what happens when people ignore the clear messages being sent by the financial markets. And when they ignore the obvious. Take commodity prices for example. 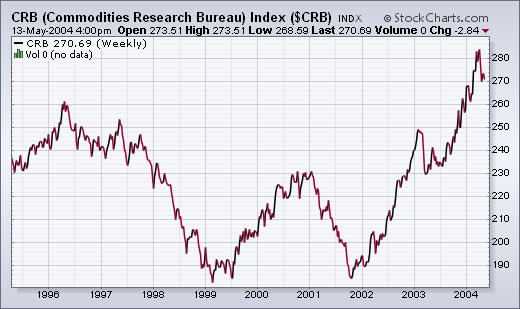 The CRB Index has been rising for two years and recently reached the highest level in a decade. Rising commodity prices are a leading indicator of inflation. One of the reasons for that is because companies have to pay for rising raw material prices. In time, they have to start passing those increased costs on to their customers. It's simple economics -- and common sense. An increasing number of companies have announced planned price increases to no one's surprise but economists.

For months, economists have been dissecting rising inflation numbers to exclude surging food and energy costs -- as if they don't count in the inflation picture. Now with gasoline and crude oil prices trading at record highs, they've suddenly started talking about the inflationary impact of rising energy prices and the potential dampening effect that has on the economy and the stock market. Where have they been for the last few months as the market deterioration sent the same message. Long-term rates have jumped to the highest level in almost two years. Here again, economists told us there was no problem there because there was no sign of inflation. This week they suddenly started to take notice. That's why we look at forward-looking markets and not backward-looking economic numbers.

Now, the only one left to convince is the Fed. Trouble is the Fed is populated by economists.