We've passed the halfway mark for 2004 and the markets don't have much to show for it. As you can see in the PerfChart below, the market continues to move sideways in a broad range that's rarely over 5% above or below where it started the year.

The Amex is the "big winner" so far - and has shown some nice relative strength during the past couple of days - but this is mostly a picture of a market that is moving sideways. Are we just "marking time" until the end of the summer doldrums? Time will tell, but at this point, it's a market for short term traders.

We've got great articles from John Murphy, Carl Swenlin and Arthur Hill for you below, but first, let's return to my ten part series on John Murphy's 10 Laws of Technical Trading:

LAW #2: SPOT THE TREND AND GO WITH IT

Murphy's Law #2: Determine the trend and follow it. Market trends come in many sizes -- long-term, intermediate-term and short-term. First, determine which one you're going to trade and use the appropriate chart. Make sure you trade in the direction of that trend. Buy dips if the trend is up. Sell rallies if the trend is down. If you're trading the intermediate trend, use daily and weekly charts. If you're day trading, use daily and intra-day charts. But in each case, let the longer range chart determine the trend, and then use the shorter term chart for timing. - John Murphy

This law echoes many of the lessons from Law #1 that we discussed in the last issue. Certainly, our Gallery View tool can help you determine which trend you want to follow, but when you get down to the nitty-gritty, you'll need to switch to our SharpCharts workbench and it's "Period" setting to zoom in on any potential trading stocks. Here's an example of how to do it:

The Energy sector has been one of the strongest sector this year and Williams (WMB) has been one of the strongest stocks in that sector. (I used our S&P Market Carpet to spot WMB). Since the stock has been strong for some time, let's investigate trading it on a daily basis. That means we should start by finding the trend on the weekly chart. Here's a weekly chart that I created that shows us several trend indications: 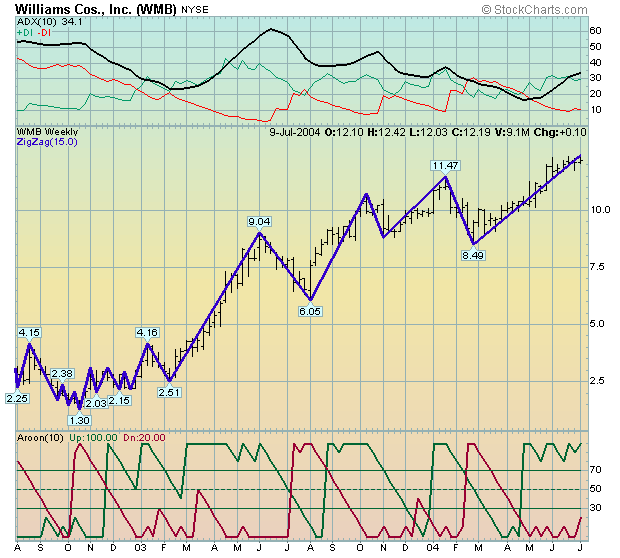 In the middle of the chart are the weekly price bars for Williams overlaid with a 15% ZigZag line. The ZigZag line will only change direction if the price falls (or rises) by more than 15% from the last time the line changed direction. Notice that Williams has not lost more than 15% since setting the 8.49 low at the end of February. Thus, the 15% ZigZag is indicating that the trend us UP.

Above the chart is another popular trend indicating indicator, Wilder's DMI system (which includes the ADX line). This is a 10-week version of the DMI. Notice that the green "+DI" has been above the red "-DI" line since they crossed in mid-April. In addition, notice that the black ADX line is rising again and has been above zero for the entire chart. These indicate that the stock is in a strong uptrend (duh!). Also notice where the +DI and -DI lines switched position back in early January - that confirmed the downtrend that started in December.

Below the chart is the Aroon indicator, another popular trend indicator. The interpretation is very similar to that of the DMI - when the green "Aroon(up)" line is above the red "Aroon(down)" line, the stock is trending up and vice versa. The Aroon's signals are often easier to spot than Wilder's DMI system's. (Note: In actual practice, you should use either the Aroon or Wilder's DMI, not both. Use whichever gives better signals for your style of trading and then stick with it.)

Bottom Line: Williams is still in a strong uptrend on the weekly charts. That means we should be looking to "buy the dips" on the shorter-term (daily) charts. Here's an example: 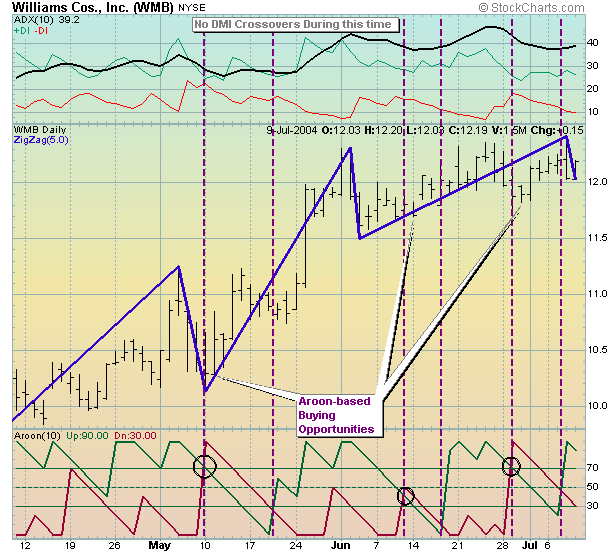 Now we're using the same indicators to look for trend changes on this daily chart. Like many stocks that are in a strong up-trend, Williams has not provided to many chances to "buy the dips". In fact, the ZigZag and the DMI indicators don't show us any "downtrends" at all. On the other hand, the Aroon indicator's graph contains three places (black circles) where a minor pull-back occurred and good potential entry points appeared.

Note, there are many other ways to determine the trend of a stock from a chart (including the "Mark 1 Eyeball" approach). The Aroon and DMI are used as examples here. If you are comfortable with the Aroon's signals (and know how to set effective stop-losses) the chart above could have given you some nice trading results.