While the Nasdaq trades near a 52-week high, the Semiconductor HOLDRS (SMH) remains well below its Jan-04 high and has shown relative weakness over the last few months. There is also a split within the group as Applied Materials challenges resistance and Micron Technology (MU) tests support. Until both get on the same page, the Semiconductor group is likely to remain in a funk and continue underperforming the Nasdaq.

Applied Materials (AMAT) formed a double bottom over the last few months and is testing key resistance around 18. The double bottom represents a base over the last few months with support at 15.5 and resistance at 18. A break above 18 would confirm the pattern and the upside target would be around 20.5. Upside volume has been rather strong lately and this increases the chances of a breakout.

While AMAT is challenging resistance, Micron Technology (MU) is testing support and formed a potential head-and-shoulders over the last few months. This pattern is mostly associated with reversals, but can also signal a continuation. A move below neckline support would signal a continuation lower and project further weakness to around 9. Should MU hold support at 11, look for a break above 13 to ignite the stock and the Semiconductor HOLDRS. 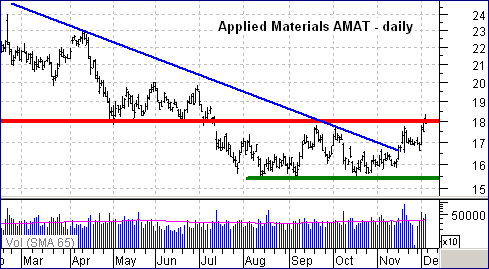 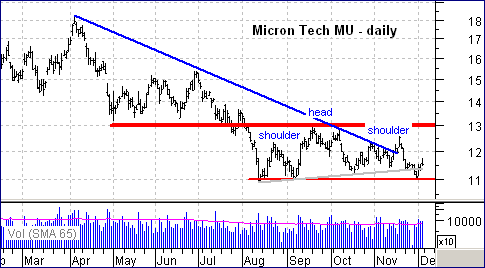