The last paragraph in the September 23 report carried the headline: LONG TERM IMPLICATIONS FOR STOCKS AREN'T GOOD. To repeat what I wrote then, "An October pullback in oil would probably be helpful to the stock market during the fourth quarter. The ability of oil to stay over $40, however, will remain a drag on the stock market and the economy...and will probably limit stock market gains during 2005". So far, the October top in oil (and this week's downturn) has been bullish for stocks and fits into the idea of a fourth quarter rally lasting into the start of next year. The longer-term picture is still in doubt. If this is just an intermediate correction in oil, and if oil starts to rise again next year from $40 (as I suspect it will), the stock market could run into trouble. That's another reason why $40 crude is such an important number. In case you're wondering if oil really has an impact on stocks, take a look at the last two charts. The peak in oil during March 2003 (at the start of the second Iraq war) coincided exactly with a major bottom in the S&P 500 (see first arrow). The second peak in oil this October (see second arrow) helped launch the latest S&P 500 upleg. Right now, the drop in oil is working in the stock market's favor. 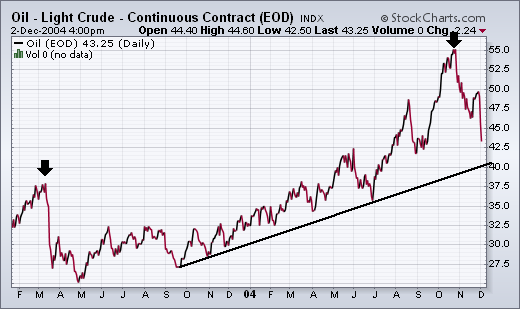 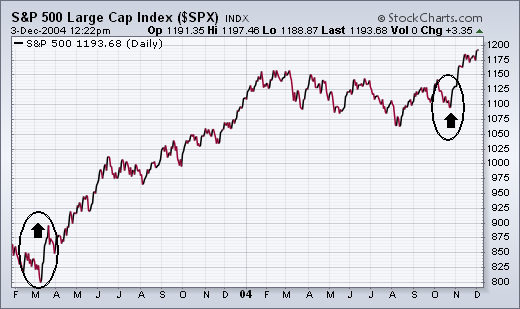