DOW AND S&P 500 CLEAR RESISTANCE BARRIER... The hourly bars for the Dow Diamonds and the S&P 500 SPDR show both having cleared initial resistance at their mid-January highs. [Both also closed back over their 50-day moving averages]. Small cap indexes accomplished that earlier in the week, which hinted that the large cap indexes were heading in the same direction. I also showed the improvement in market breadth figures earlier in the week. That greatly increases the odds that the blue chip averages are headed for a challenge of their old high. 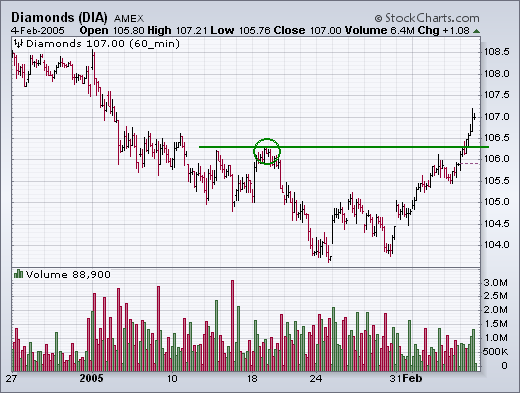 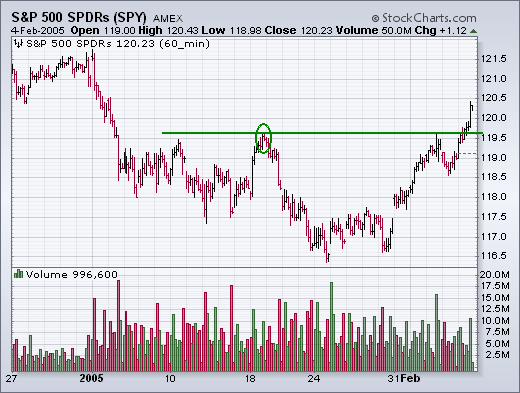 IT LOOKS LIKE MARKET IS IN FIFTH WAVE OF FIFTH WAVE ... From a longer-term perspective, very little has changed. I've written several times about the possibility of another upleg which could challenge (and maybe even exceed) the late 2004 peak. My work, however, still suggests that another upleg would probably be the final one in the cyclical bull market that started in October 2002. Or, to put it in Elliott Wave terms, I believe the market has begun the fifth wave of a fifth wave. [The fifth wave of the cyclical bull market started in August. The fifth wave of that fifth wave started this month]. I've been asked if there's a calendar date for a possible top. One possibility is March which would be the two-year anniversary of a major bottom. The other would be April. After January, April is the next strongest month in the first half of the year. One of the reasons I recently suggested some profit-taking during January was because that was the tail end of the strongest three month span of the year that normally starts in November. April ends the strongest six-month span that also starts in November. If the market does move to new high ground, my best guess for a top would be April.