THE ECONOMIC NEWS ISN'T GOOD ... It's interesting to see the media put a positive spin on recent economic reports. It was reported this week that fourth GDP growth was lower than expected while prices were higher than expected. That was described as good for the economy. Earlier this morning, the government reported that March non-farm payroll numbers were only half what was expected. That was reported as good because it lessened the chances for higher interest rates. A report of lower consumer confidence was viewed as a non-event. The ISM report showed a weakening in manufacturing activity coinciding with surging raw material prices. That apparently is why companies haven't been hiring. It was reported that although the ISM number fell to 55.2, it was still above 50 which is good. My question is how can a slowing GDP number, slowing manufacturing activity, lower consumer confidence, higher raw material prices, and fewer jobs be good for the economy. The market is telling the truer story. Sector rotations during the first quarter paint a bearish picture for the market. After suffering a bad first quarter, the market fell sharply again today and threatens to get even worse. A number of stock indexes are testing chart support at their 2005 lows. I suspect they'll be broken sooner or later. Since the market is also a leading indicator for the economy, economists might do well to pay more attention to the message the market is sending. Unfortunately, it's not an optimistic one. 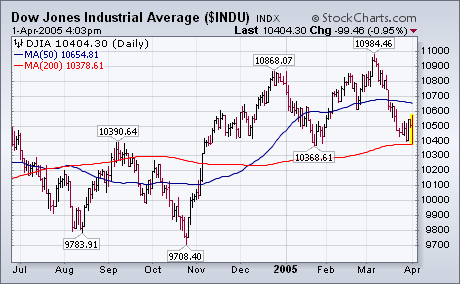 DOW THREATENING JANUARY LOW... The daily Dow chart shows the market at a critical juncture. The Dow fell 99 points today and is threatening its January low, its 200-day moving average, and its September peak at 10390. I suspect all will be broken. There's always the possibility of an April bounce. But seasonal factors then turn negative until the autumn. My best guess at this point is that Dow is headed toward its fourth quarter low near 9700. I would continue view any short-term bounces as selling opportunities. Two of the best places to be right now are energy and cash. If you haven't already done so, take a look at some bear market mutual funds. They'll allow you to make money in a falling market.