The current rally is the strongest of the year and is unlikely to disappear over night. This strength is confirmed by price movement as well as two momentum indicators. First, the 15-day Rate-of-Change surged to levels not seen since early September and mid November. Second, 15-day RSI moved to its highest level of the year. Third, the Stochastic Oscillator moved to its highest level since mid November. All three are testament to the power behind the recent move.

RSI also shows further room for gains. This indicator becomes overbought when it crosses above 70. It lagged the Stochastic Oscillator in 2004 and did not become overbought until November. Notice how RSI held the green trendline the entire rally and the red trendline the entire decline. I would look for a new trendline to emerge in the next few weeks and this will define the current uptrend. 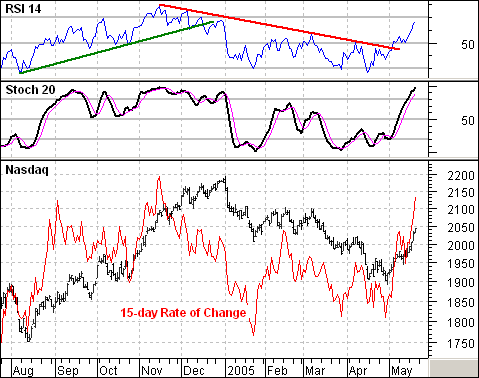