As its name implies, the Rydex Equal Weight S&P 500 Index (RSP) treats all component equal, regardless of market capitalization. This means that ExxonMobile (XOM). with market cap of $369 billion, counts the same as Teco Energy TE), which has a market cap of just $3.64 billion. This makes the index a good representation of the average Joe (Joe Stock that is).

RSP remains in a long-term uptrend and has yet to break down. The going is getting tougher, but momentum is still up overall on the weekly chart. First, the index broke resistance at 145 with a surge in Nov-04. This resistance level hounded the index most of 2004. Second, resistance turned into support with a successful test in Apr-05. Third, the trendline extending up from Aug-03 also confirmed this support level and the index remains near its all time highs.

Even though the index has not made much head way over the past year, there is a clear upward bias on chart. Support at 145 holds the key. As long as this level holds, pundits can expect a trading range at worst and a move towards the upper trendline (170) at best. A move below 145 would turn the big trend down and be bearish for the broader market. 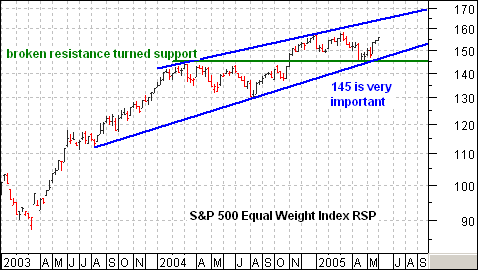