While a lot of attention has been paid to rising energy and basic material stocks this week, not much has been written about healthcare. It's time to correct that. Chart 1 shows the Health Care Sector SPDR (XLV) closing the week at a new 52-week high. [The only two other sector SPDRS to hit new highs were energy and utilities]. The relative strength ratio shows that healthcare started to do better than the S&P 500 near the end of last year. Although the relative strength line has been slipping of late, its trend is still higher. How much higher can be seen more plainly Chart 2 which shows that the healthcare relative strength ratio has broken a down trendline starting in the spring of 2003. That makes some sense. Healthcare is considered to be a defensive sector and would be expected to underperform during a cyclical bull market. Its stronger performance during 2005 is another sign that investors have been favoring more defensive stock sectors. Earlier in the year I listed healthcare as one of my favorite picks for the year. I haven't changed my mind. Chart 2 also shows that the XLV is challenging its 2004 peak. A lot of today's buying came from biotechs. 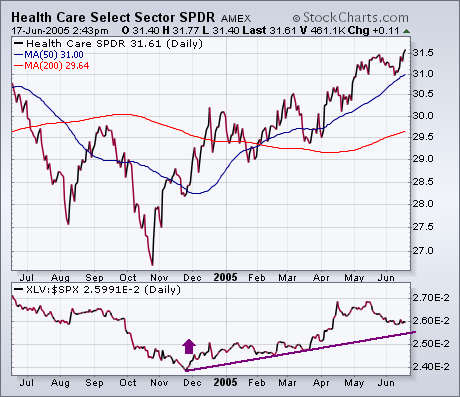 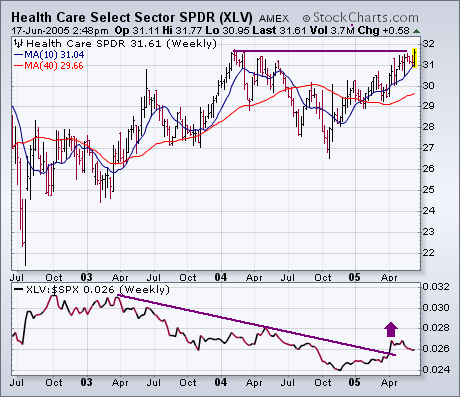