Fear is creeping into the market as the S&P 500 Volatility Index ($VIX) forms a higher low. And you thought the VIX was dead! Well, actually, it is pretty dead as volatility slows to a crawl. The VIX has been spot-on when it comes to calling market risk (volatility). The S&P 500 recorded a four year high in early August and the VIX recorded a 10 year low. The S&P 500 has gone nowhere since December 2004 and the VIX declined from 15% to 10%. This simply confirms the dullness of the current market environment.

As the red carets show, it is lower low after lower low for the last few years. The VIX remains within a falling price channel and clear downtrend. However, the indicator formed a higher low in September (green caret) and is poised to break its August high. A mini-breakout would show an increase in volatility, which is also known as risk and fear. With increased fear comes more uncertainty and uncertainty breeds contempt. This will result in flat stock prices at best and lower stock prices at worst. Should the VIX break above upper channel trendline and April high, a new uptrend in volatility (risk) will begin and this will translate into lower stock prices. 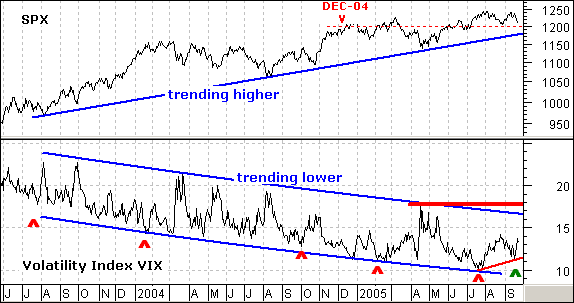