With the first week of the year out of the way; we have seen a rather sharp and violent sell-off in a number of asset classes including energy. Our interest is energy stocks: we think the sell-off has gotten a bit "overdone" to be sure as the oil service sector has dropped -7%; but as we know - markets can remain irrational far longer than we can stay solvent fighting them. But a buying opportunity is being created; however, it isn't in the oil service shares where we want to place our trading capital...it is in the integrated oil producers such as Anadarko Petroleum (APC); Conoco-Phillips (COP) Hess Corp (HES); Occidental Petroleum (OXY) and Valero Energy (VLO).

Our reasoning is technically oriented; the integrated oil vs oil service ratio has broken out to the upside through trenldine resistance, and has indeed found support recently at the 200-week moving average. Moreover, the 14-week stochastic has corrected an overbought condition, and nascently turning higher. Given this, we think that previous high resistance of mid-2002 and mid-2005 at 6.4 will be broken, with a move thereafter upwards of the 2001 high at 7.6. 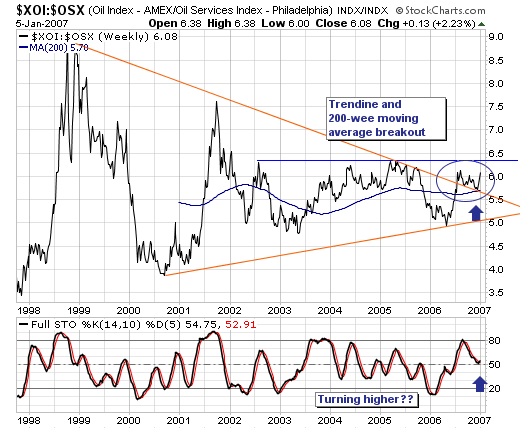