For the past couple of weeks, the markets have focused in upon crude oil prices and their attendant rise given the Iran hostage situation. The prevailing thought was that "geopolitical premium" was on the order of $4-to-$5 a barrel of the $67/barrel price; and that once the situation was concluded successfully - the premium would be lost rather quickly. Of course the situation was concluded last week, but the price of crude oil didn't "plunge" as expected. In fact, only not been the case as crude oil has lost only -$2.50 off its highs, with the decline quite orderly indeed. We cannot think of a more bullish respone than what was seen; obviously there are other mitigating factors extant in the price of crude oil that haven't allowed it to decline. Therefore, we think the current rally has "legs", with the recent weakness nothing more than a good old bit of profit-taking before an assault on the all-time highs. Technically, we can make the tentative "bullish case" given major support levels have held. Major trendline support has held; and the 200-week moving average has held; and minor trendline resistance was broken above. If the 60-week moving avearge just overhead can be cleared with a bit of authority, then our bullish confidence level will be raised materially. 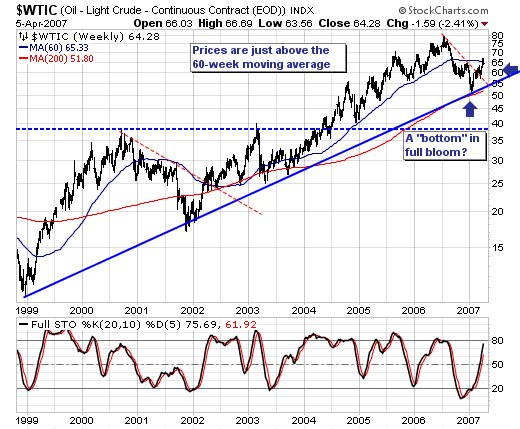 Conversely, we can make the tentative "bearish case" that perhaps crude oil prices can "fail" at the 60-week moving average has it has done so for the past several days. Certainly this was the case in 2001 case where the flattening 60-week moving average turned prices lower by -33%. If this were to occur, then a 2001-like decline would target major support near $40. We think this is a remote probability, but a probablity nonetheless. Therefore, our current stance is quite simple: we are bullish of crude oil, energy stocks in general, and oil service shares in particular [Transocean (RIG) noted on Friday that demand for services was high and rising and likley to do so far into the future]. However, we understand the "risk" to the bullish trade, and can manage our risk easiliy using tight position stops.