The Dow is poised to re-test the 13,700 level next week. If it is able to break above that level, it will be a very bullish development indeed. Given that the Dow has faltered just below that level twice in the previous two months, odds are it will fail again this time. Smart ChartWatchers will be watching closely however - our Dow Gallery View charts are a great place to watch the action.

TAKING A LOOK AROUND

For the past 18 months or so, I'm been putting periodic updates in this newsletter about the progress of our new datacenter project. Now that things are complete, I thought I'd show you a couple of pictures of the new facility. The key problems that we were facing in our old datacenter were a lack of cooling and a lack of power. All of the new computers we had added were taking too much power and generating too much heat for our old systems.

To fix the cooling problem, we installed a very large "chiller" unit outside of our offices that chills water and pumps it through a closed loop of pipes into four "In Row Cooling (IRC)" units located next to our server racks. The IRCs are essentially big radiators with fans that suck in the hot air that our servers generate and force it through coils that are full of the chilled water from the outside chiller. They then blow the chilled air out the front so it can re-enter the front of our servers.

Here's a picture of the outside chiller: 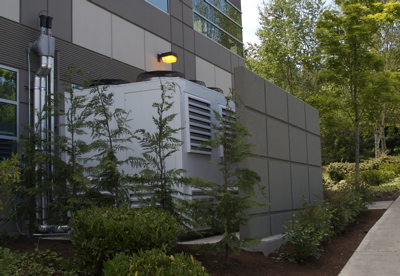 And here's a shot of the inside of our datacenter: 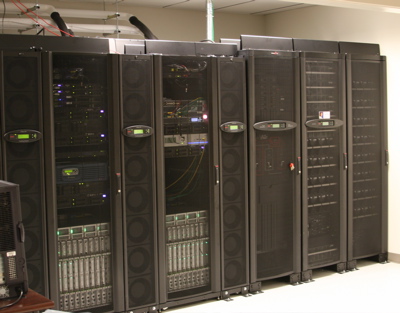 The thinner cabinets located in-between each of the larger server racks are the IRCs I was talking about. Notice the large white pipes up above the racks? They deliver cold water from the outside chiller and remove the heated water from the IRCs.

Over on the far right side of the picture are three full racks that contain our new "Uninterruptable Power Supply (UPS)." The new UPS can power all of our servers for over 2 hours in the event of our power failure. That's over twice as long as our old UPS even though it is powering almost twice as many servers!

Speaking of servers, the big silver things at the bottom of the other two racks are our two new Sun Blade 8000 chassis. Each Sun chassis contains ten blade servers and each server contains four 2.8GHz AMD Opteron processors. If you do the math, that means that each chassis provides 112 GHz of computing power and, as of last week, we now have two fully populated chassis for 224 GHz of chart crunching power. These new blades are able to generate charts almost twice as fast as our previous blades but they use lots of power and generate lots of heat. We could never have installed them without the power and cooling improvements to our new datacenter.

(BTW, The Thomson datafeed servers that have been causing us so much trouble recently are located at the top of the rack on the left side of that picture.) 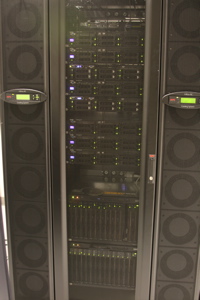 Finally, here's a shot of our "data" rack. The upper half contains the larger Dell 2950 servers that store all of our historical stock data. Lower down are the two IBM BladeCenter chassis that contain the smaller blade servers that used to generate our charts - they are now being converted to run other areas of our site.

There are lots of other parts of our Datacenter that I'd love to show you but I should probably save those for some other day. Hopefully this quick glimpse helps you see how we've been working hard to continually upgrade the equipment that runs our website. These upgrades should allow us to continue providing our charts for years to come.