Although last week's broader market was under pressure, the long forgotten Biotech HOLDRs (BBH) showed surprising resilience, and, in fact, is on the cusp of a major breakout. If you'll recall, BBH has underperformed badly in the past, even while posting very good earnings. That puts BBH in the categories of "value" and "defensive," code words used to describe a security in which money will flow in a market decline. Thus, we can make a fundamental and technical case to be buyers.

From a technical perspective, BBH has a history of rising very sharply, then consolidating prices for a year or two. This current consolidation began in early-2005 – making it nearly 2 ½ years old. Classical technical analysis tells us that the longer the base – the more sustained the move. Thus far, previous support has held at $158, which is just above the rising 200-week moving average. Too, prices are hard upon the 80-week moving average at $171 – a level we think will be handily broken in the days and weeks ahead, given the 14-week Stochastic is turning higher from oversold levels. 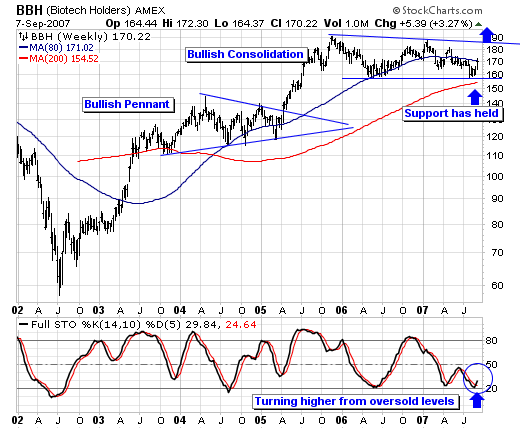 Therefore, the technical setup is rather good. It really doesn't get much better than this as they say. Our target on the trade is above $220.