The Finance SPDR (XLF) and Consumer Discretionary SPDR (XLY) formed large double tops this year, and both broke support in late July to confirm these bearish reversal patterns. Volatile trading ranges followed these support breaks (yellow ovals), but these ranges look like consolidations after a sharp decline. In other words, XLY and XLF became oversold in mid August, and these consolidations worked off these oversold conditions. Friday's sharp decline looks like the start of another move lower, and a move to the next support area is expected. 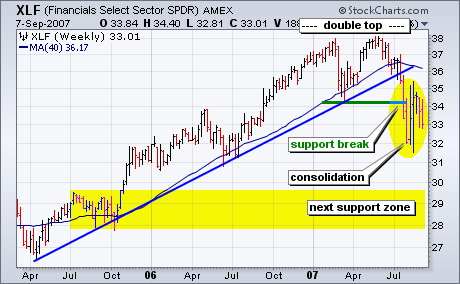 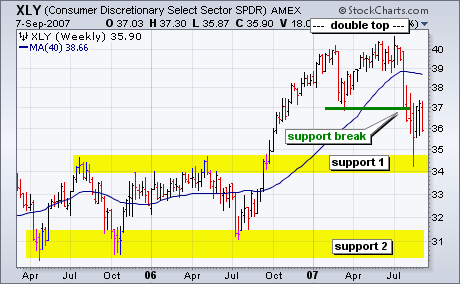 Both sectors are important to the overall market. The Finance sector represents banks, brokers and REITs. It is the single biggest sector in the S&P 500. Moreover, banks and brokers are at the heart of the sub-prime problems, and this issue is not going away until the Finance sector rebounds. The Consumer Discretionary sector consists of retailers, restaurants, media companies and automakers. It is the most economically sensitive sector, and a breakdown in XLY bodes ill for the economy overall.