There has been clear technical damage on the major indices as a result of concerted selling. The NASDAQ 100, which has led the market higher for most of 2007, has been treated rather rudely over these past few weeks and that's never good. The reason? During periods of economic expansion, the higher growth technology stocks tend to outperform because of their ability to grow earnings more rapidly. The stock market, for the first time in a long time, is sending a message that the economy is much worse off than was originally forecast. The good news is that inflation is dormant per the tame PPI and CPI numbers released last week. A sudden increase in inflation would put the Fed in a box, but since inflation remains contained, the Fed has ammunition to continue lowering rates. That should, in turn, lead to a strengthening economy in 2008.

The bond market is already pricing in the next interest rate cut and as you can see from the chart below on the 10 year treasury bond we appear to be heading to the 3.80-4.00% area. That should keep downward pressure on the dollar and produce continuing gains for the gold sector. 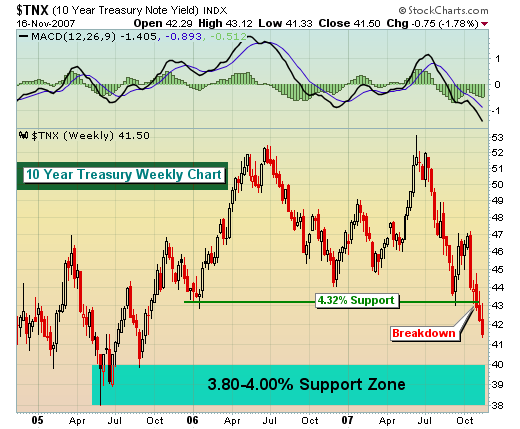