The intermediate-term broader market technical condition is improving; however, we believe that this "improvement" is nothing more than a respite before the larger storm develops. First, let's note that the Wilshire 5000 has broken its bull market trendline off its 2003-2006 lows, and remains on the defensive below its 70-week moving average. Secondly, a countertrend improvement has developed from the longer-term 200-week moving average, which did indeed provide support back in 2004 in tandem with the 70-week moving average. We would posit - and perhaps it is too early to do so, but we certainly want to keep all options on the table - that the current improvement is nothing more than a "right shoulder" forming of a larger "head & shoulders" topping pattern. Obviously overhead resistance at the 2007 previous low at 14,100 and the 70-week moving average at 14600 must prove its merit with lower prices - and break below neckline support. If this is the case, then we could very well see prices falter sharply as low as 10,000.

Certainly one must be concerned with the credit crisis/contagion to be sure, for it is the "great unwinding" that took years to put in place - and we would be rather naïve to believe that it is to be solved in a matter of 6-8 months. If this bear market is over, then it would be the second shallowest on record - and given the largest debt bubble in history is unwinding - then we remain very skeptical the decline is over. Moreover, unprecedented stresses in the money markets have developed this past week; stresses which the stock market is ignoring at is own peril. This is our roadmap; we short sellers of rallies. 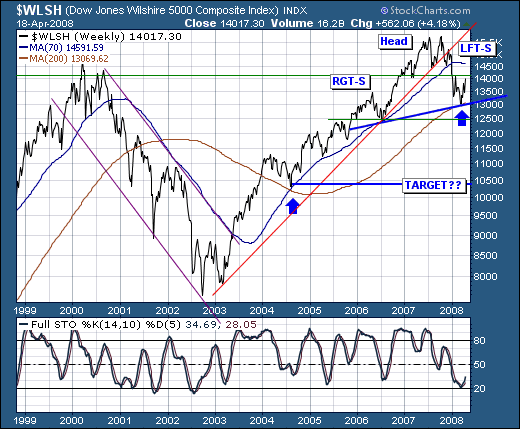