I've been bullish since my earlier bottom call in January. There were several reasons for the call, but in particular there were contrarian indicators moving off the charts in the bearish direction. That suggested that the next move in the market would be higher - and it was. After a retest in March with an incredibly bearish put call ratio in place, the market soared. There have been many positive technical developments since that time, with perhaps the most notable being the relative outperformance that the semiconductors have enjoyed. Below in Chart 1, I'm highlighting the relative strength of that group. Nearly every bullish move in the semiconductor group has lifted the overall market and this time has been no different. In fact, the semiconductors have been the reason for the outperformance of the NASDAQ and NDX over the last several weeks. At Invested Central, we were in the minority in calling a market bottom, but that's exactly where we prefer being - in the minority. Take a look at the relative strength of the semiconductors. It will be very important to follow this group in the weeks ahead for clues as to the direction of the market. 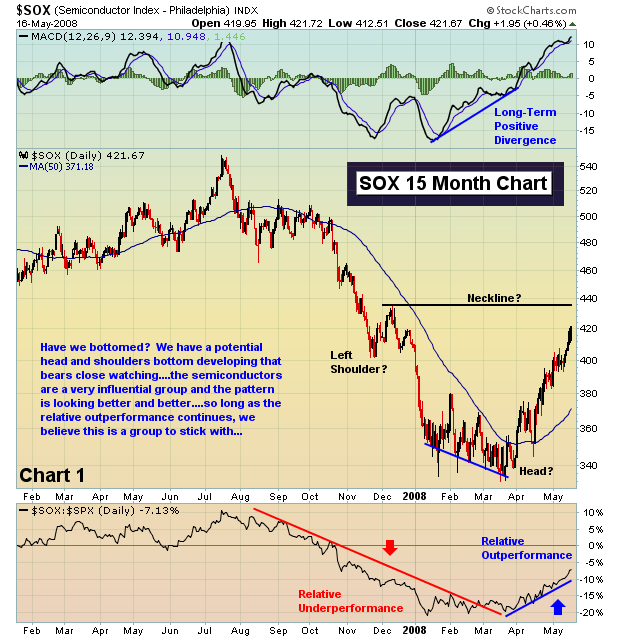 I mentioned above the put call ratio. This very important sentiment indicator is checked every trading day and I follow the 5 day and 21 day moving averages as a gauge of investor sentiment. When I see extreme readings in either direction, it sends up red flags that a directional change is approaching. We're nearing one of those times right now. After having been very bullish for weeks, I've moved more to a neutral or even bearish stance in the near-term. It's too early to make any long-term calls based on current developments, but clearly the bullishness that we've recently enjoyed could be waning. Why? Well, here's a couple of reasons. First, the "equity only" put call ratio (which ignores index options) hit 1.35 on March 17th, the highest reading at the CBOE since the equity only reading was broken out. That marked extreme bearishness on the part of individuals and VOILA! a bottom was in place. We're now on the opposite side of investor sentiment. On Friday, the equity only put call ratio printed its third consecutive daily reading below .60. There have only been 8 such readings during all of 2008. Obviously, options traders are beginning to think the water is safe again. That bothers me. You may recall Chart 2 below as it demonstrates the importance of tracking investor sentiment via the put call ratio (the numbers on the chart represent the 5 day moving average of the "equity only" put call ratio). Note the readings at significant tops and bottoms and then check out the current 5 day moving average. There is no denying that we've seen a HUGE swing in investor sentiment in the last 8-9 weeks. We may not be exactly at a top, but we're getting close. 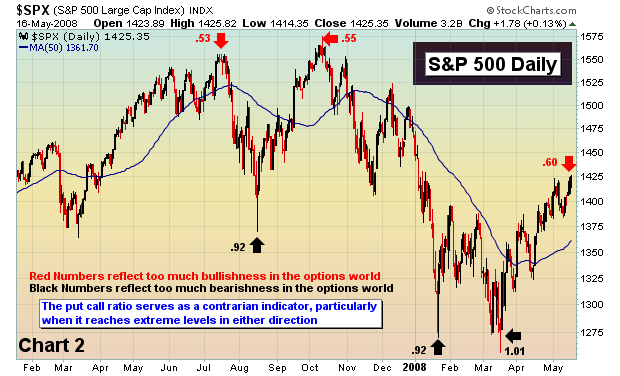 Finally, let's review the VIX. The VIX is designed to measure the implied volatility of S&P 500 index options. As fear ramps up, the VIX normally rises indicating that volatility will be picking up as well. A rising VIX is synonomous with a falling equity market. A falling VIX is synonomous with a rising equity market. As the VIX falls too far, complacency becomes an issue. On the flip side, as the VIX skyrockets, fear is elevated and a panic bottom generally forms. When the VIX lost its rising trendline in late March/early April, it was further evidence that the market was going higher. Currently, the VIX has reached a support level. A bounce off of this support level would likely coincide with a drop in the stock market. We have to respect that support area until it's lost. Check out Chart 3 below. 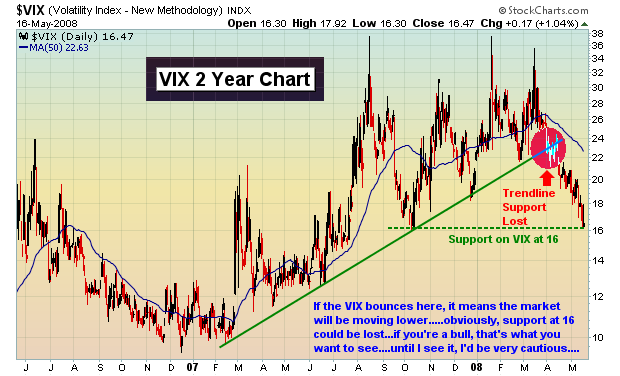 I would definitely stay away from the underperforming groups like financials and consumer discretionary stocks. Another bout of selling would likely take a toll on both of those groups. Put insurance or adding the Ultra Short ETFs that track the various indices would not be a bad strategy to hedge during this period of uncertainty.