Despite a big decline in the S&P 500 ETF (SPY) over the last five weeks, the Russell 2000 ETF (IWM) has been holding up pretty well. However, a bearish reversal pattern and weakening momentum suggest that IWM will ultimately follow its big brother lower.

On the price chart, IWM formed a small head-and-shoulders pattern over the last six weeks. Neckline support resides just below 72 and a break below the June low would confirm this pattern. Once confirmed, the initial downside projection would be to around 68. The height of the pattern (roughly, 76 - 72) is subtracted from the neckline break for a target (72 - 4 = 68). There is also support around 68 from the late March and mid April lows. 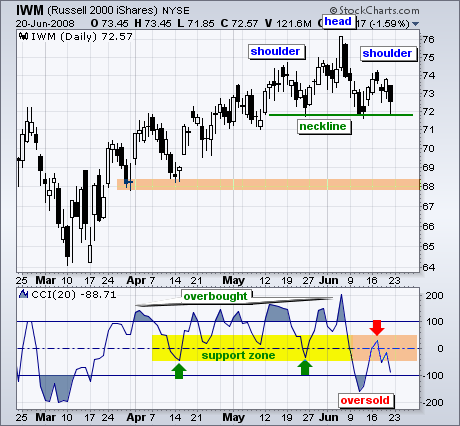 There is also a videoversion of the this analysis available at TDTrader.com - Click Here.