Tuesday afternoon marked a short-term bottom. In my opinion, we're going to print AT LEAST one more low in time; however, the sentiment had deteriorated on Tuesday to a point where we normally we see a rebound. In addition, there was TONS of net put premium (in-the-money put premium minus in-the-money call premium) and options were set to expire on Friday. We'll discuss sentiment issues shortly, but first take a look at the following closing prices on ETFs as of Tuesday and their respective max pain (the price point at which the premium on in-the-money call options equals the premium on in-the-money put options) prices:

I calculated the value of the net put premium on the QQQQ as of Tuesday and determined it to be approximately $250 million! That's just for one ETF. Imagine the amount of net put premium across all stock, ETF and index options. If the QQQQ's had continued to decline, the net put premium would have risen exponentially. In addition, there were over 1.825 million put option contracts traded on Tuesday, a record since the CBOE has been providing the equity only put call data. Simply put, the bears were a greedy bunch and the rubber band was stretched about as far as it was going to go near-term. As a result, there was a wicked rally on Wednesday and Thursday as prices gravitated much closer to max pain points. The max pain is a figure I calculate every month and it provides yet one more clue as to how the market might react near-term. This time, it was dead on.

Now back to sentiment. The equity put call ratio finished on Tuesday at .90 and the 5 day moving average of the equity only put call ratio had spiked to .88, the highest level since March 24th. In addition, the VIX spiked above 30. Readings above 30 on the VIX have coincided with recent market bottoms. In my last article, I discussed the lack of poor sentiment readings and indicated that we needed to see a step up in fear. We finally saw that on Tuesday. Now for the bad news. It wasn't fearful enough. The market was already primed to rebound off of oversold conditions, max pain issues and even a few recent positive divergences on intraday charts. That rebound materialized on Wednesday and Thursday. Take a look at Chart 1 below to review the VIX: 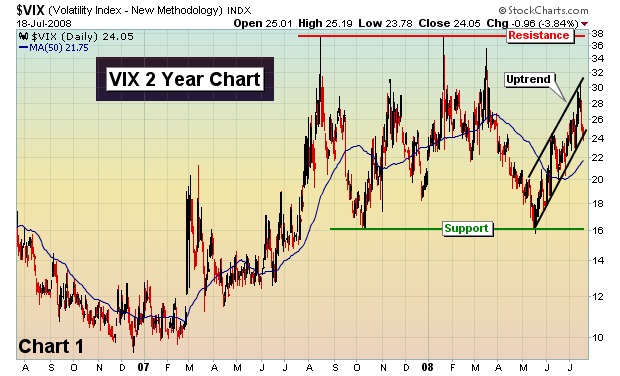 The resistance area on the VIX is above 35 - we have plenty of room to ramp up fear. The current uptrend may take us to that level before it breaks. Time will tell. Separately, while the put call ratio has been on the move to the upside and reflecting increased pessimism, it too has more room to go. Check out Chart 2: 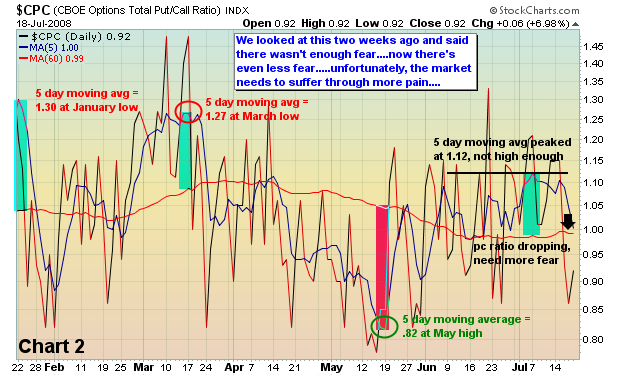 Historically, we entered on Friday the 2nd worst time period of the year. At Invested Central, we provide a historical perspective ("The Bowley Trend") on each trading day. For instance, consider the following data that relates to trading on the S&P 500 since 1950:

If the market advances over the next week, it will be doing it against significant historical headwinds.