This year has seen the S&P decline by -24.3%; with the building crescendo of "fear" likely to provide for a bottom that can be traded sooner rather than later. We're looking towards sector rotation to play a large part in our trading strategy; and we're quite interested in the fundamentals as well as the technicals regarding a "long Industrials/short Healthcare (XLI:XLV)" pairs position. Quite simply, the Industrials have underperformed the S&P by -10.2% YTD, while Healthcare has outperformed by +7.5% YTD - this notes the obvious safety factor inherent in the Healthcare sector given its "less volatile" nature. However, the Obama Administration's tackling of the US healthcare system has sent XLV prices lower in the past two weeks. Moreover, there will likely be pressure upon XLV for the foreseeable future as Healthcare "safety" becomes a source of funds for those stocks - such as the Industrials - that have been beaten down. This is the fundamental argument. 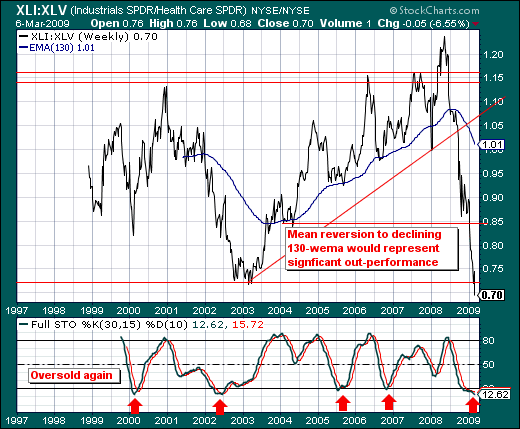 Technically speaking, the XLI:XLV ratio has fallen rather precipitously in the past year from above 1.20 to a new low at 0.70; but it is precisely this "plunge" that has put the distance below the 130-week exponential moving average at historic proportions, with the 30-week stochastic falling below the oversold 20-level. We are mean reversionists at heart; and given this distance and the prior instances of the 30-week stochastic turning higher - then we are very interested in putting on this trade as the risk-reward is in our favor. Now, it hasn't turned higher yet; but once a catalyst appears...we'll be doing so.