At the start of the 20th century, Charles Dow invented the Dow Theory. It was a simple idea. He created two stock indexes -- one for industrial stocks and one for the transports (which were exclusively rails). His reasoning was that both indexes should rise together in a healthy economy. While industrial companies made the goods, the rails transported those goods to market. One couldn't function without the other. Although he was applying that idea to the economy, his Dow Theory became a basic part of traditional technical analysis. When both indexes are rising together, a bull market exists. When they fall together, a bear market is present. Charts 1 and 2 compare the Dow Industrials and Dow Transports over the last three years. Both are in major downtrends which is bad for stocks and the economy. Although the transports turned down first in the second half of 2007, they retested their old highs in the spring of 2008 before finally peaking. The transports fell sharply during the second half of 2008 and are now trading at the lowest level since 2003 (the industrials have already broken that low). Since most attention is given to industrial stocks, I'd like to examine some driving forces behind the transportation plunge. 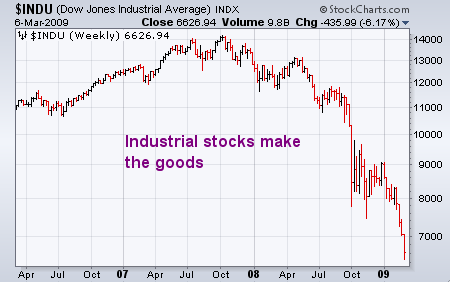 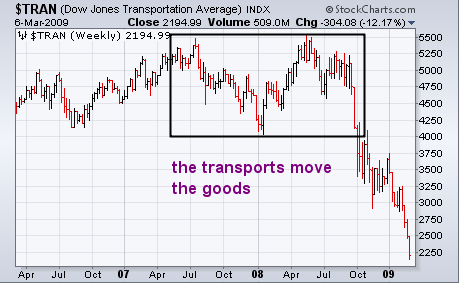