As the market continues it counter-trend bullish rally, we find is more than interesting that the Homebuilders haven't yet taken a leadership role. We would posit that given it was the Homebuilders that was the "canary in the coal mine" for the sharp broader market decline, then if the economy were going to turn around and push higher...the Homebuilder ETF (XHB) would be in a very good position to benefit from it given they are quite oversold and heavily shorted. Thus, we would expect XHB to outperform the S&P as a rally unfolded. 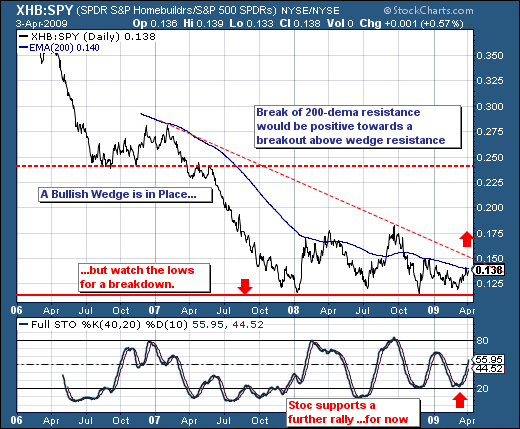 Thus far, this hasn't been the case. When we look upon the Homebuilder ETF/ S&P 500 Spyder ETF Ratio (XHB:SPY), it has bounced around near it's lows since November-08, and has risen very little relatively. In other words - "a market performer" - nothing more. However, technical pattern is a tale of two as they can be construed as both bullish and bearish. If the lows continue to hold and the ratio breaks out above the 200-day exponential moving average, then obviously wedge resistance will be challenged and perhaps broken above. If not, and the lows are violated, then we'll see further broad market weakness and probably a slew of homebuilder bankruptcies.

Time will tell as they say; and that time is coming sooner rather than later.