The various US market averages have seen six straight weeks of rally, and one must wonder is "lucky #7" is in the offing. We don't know honestly; however, there are signs the rally off the March 9th low is becoming "long in the tooth" and primed for a rather "nasty correction"in our minds. To this end, we think it instructive to look at the weekly CBOE Volatility Index or VIX. 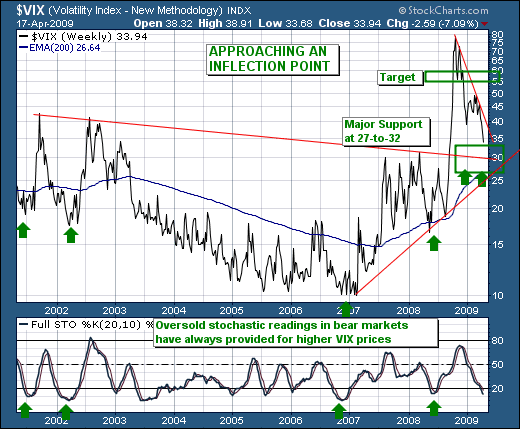 Our interest here is upon the recent decline from rough panic-level of 80 to its current complacent-level of 34. Quite a bit of marginally good or second derivative news as we could say has pushed it lower; however, we would caution as it is on the verge of forging a bottom that should result in a sharp upward move that would coincide with a larger downward movement in the US market averages. The decline has reached back into trendline support levels, and has done so with the 20-week full stochastic moving back into oversold territory. This latter point is most critical: during bear markets, an oversold stochastic reading such as this has led to sharp upward adjustments. If we had to venture, then we would put the retracement higher at 50% of the downward move, which would roughly target the 55-60 zone.

If this forecast were to come to fruition; then we would likely see the major averages "test" their March lows. Thus, we foresee quite a bit of downside remaining in the equity markets; although there are interim hurdles that must be broken before this will occur. If they hold, then certainly higher prices could materialize in a larger mean reversion exercise; although that isn't our preferred forecast yet.