Arthur Hill reviewed some standard intermarket relationships on Thursday. One of the best known is the inverse relationship between the U.S. Dollar and commodity prices. That's why a falling dollar has had a bullish impact on commodity prices since the spring. The falling dollar has also boosted global stocks as money moved out of that safe-haven currency into riskier assets like stocks. But not all stocks rise equally at such times. A falling dollar has a much more bullish impact on foreign stocks. Since the March top in the dollar, for example, the S&P 500 has risen 56%. Foreign stocks, however, gained 72%. The stronger foreign performance was due largely to the falling dollar. The red line in the chart below is a ratio of the Morgan Stanley World Index (Ex USA) and the S&P 500. The green line is the U.S. Dollar Index. The inverse relationship between the two lines is very clear. Foreign stocks did much better than the U.S. from 2002 to the end of 2007 while the dollar was falling. Foreign stocks did much worse than the U.S. during the second half of 2008 as the dollar rallied. The dollar peaked in March of this year and has been falling since then. The rising ratio shows foreign stocks outpacing the U.S. since the dollar top in March. A weaker dollar favors heavier exposure in foreign stocks. The direction of the dollar also determines when it's better to use foreign ETFs. 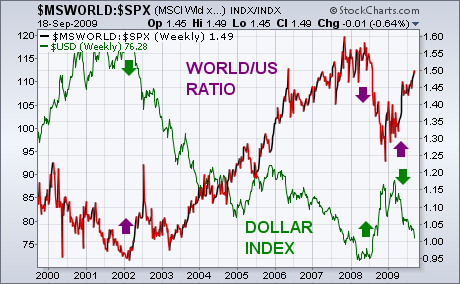