NYSE ADVANCE-DECLINE LINE NEARS OLD HIGH ... One of our readers asked for a look at the NYSE Advance-Decline line, and this may be a good time to start keeping an eye on it. Chart 7 shows the NYAD nearing a test of its 2007 peak. What's surprising is that the NYAD has retraced nearly its entire downtrend while major market indexes have retraced only half. That's probably good news since the NYAD is viewed as a leading market indicator. One possible concern, however, is that the AD line may meet some resistance near its old high. That's why it's worth keeping a close eye on as its retests its 2007 high. 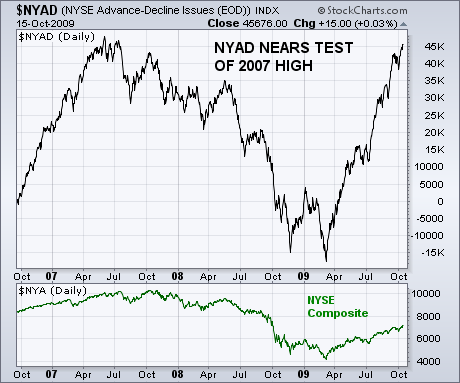