Click here to see the live version Click here to see the live version
×
According to the Stock Trader's Almanac, the January effect is the historical tendency of small-caps to outperform large-caps from mid December until April. Notice that this period coincides with the bullish six month cycle that extends from November to April. Historically, the strongest period of small-cap outperformance runs from mid December until end January. Judging from small-cap performance in the first half of December 2009, it appears that the January effect is starting early this year. The Perfchart below shows two small-cap indices, the Russell 2000 ($RUT) and Russell Microcap Index ($IJE), and two large-cap indices, the S&P 500 and the S&P 100 ($OEX). From December 1st to December 18th, the two small-cap indices are up, but the two large-cap indices are down. This is some pretty strong outperformance from small-caps. 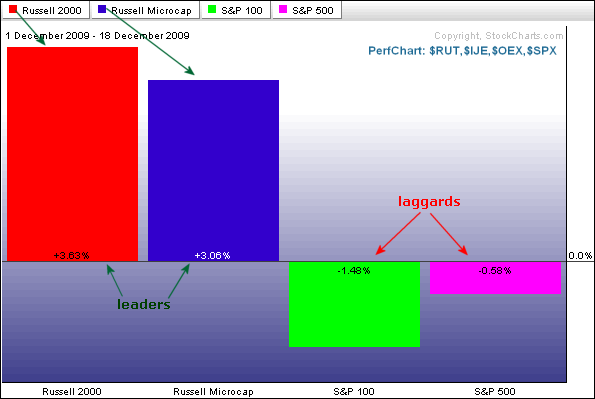