A series of candlesticks often develop into recognizable patterns that can give a trader insight about the current market psychology and likelihood of near term price moves.  Many of these 1, 2 or 3 candlestick patterns are used as warning signs for upcoming trend reversals.

Dozens of candlestick patterns have been identified dating back to the 1700's with Japanese rice futures traders. Japanese traders were able to quickly identify and communicate short term supply and demand forces in the market with these recurring patterns of price action.

One candlestick that has significance by itself and in combination with other candlesticks is the Doji candlestick shown above. Price moves above and below the opening price during the day and then closes at the same, or nearly so, price as opening. This is an indication that buying and selling market forces were balanced even though investors had a rollercoaster ride in price swings during the day.

With doji candlesticks, a long lower shadow is considered bullish since buying interest moved the price up from a deep intraday decline before market close. Long upper shadows are bearish for a similar reason; initial buying interest gives way to sellers by market close. 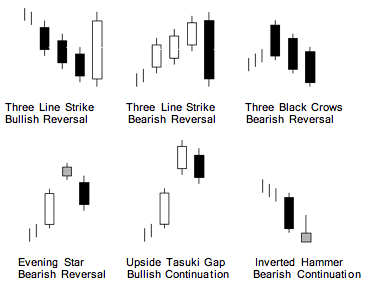 Note: The gray candlestick bodies in the diagrams indicates that the body color is not relevant for the subject pattern.

Additional candlestick reliability information can be found in Bulkowski's book Encyclopedia of Candlestick Charts. while Greg Morris' book Candlestick Charting Explained is a good general introduction to the topic.